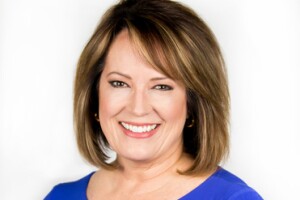 2 Works for You isn't just a motto for me, it's a daily mission that has not changed in the nearly 20 years I have worked here as the evening news anchor and reporter.

I've been covering events throughout northeastern Oklahoma with an emphasis on breaking news, health and early childhood education issues since May 1996.

Monday through Friday, I anchor and help write the 6 p.m. and 10 p.m. newscasts. While some people think anchors just read the news, you will find me at my desk every afternoon writing and producing the 2 Works for You Right Now updates as well as reporting and editing video for the 5 p.m. newscast.

I am honored that my work on these newscasts and other special projects earned six Emmy awards, honors from the Society of Professional Journalists, the Oklahoma Association of Broadcasters, as well as national and regional Edward R. Murrow Awards from the Radio and Television Digital News Association (RTNDA).

While I grew up in California, moving to Oklahoma was actually a return to my family's roots. My great-great grandparents came to Oklahoma Territory by covered wagon from Missouri and settled in the southwestern part of what would become Oklahoma. My great-grandmother was born in Mountain View before statehood. My grandfather, Brian Jenkins, was born in 1918 and told me he was raised in Fort Cobb and Healdton. He used to tell the story of his family moving to California during the Dust Bowl Era then "riding the rails" back to his beloved Oklahoma because he was so homesick.

I am married to Dennis Larsen, who is a deputy chief and bomb technician for the Tulsa Police Department. Together, we have raised three children we think are pretty amazing. True of every parent, right?

In my spare time, I like to work on home improvement projects, garden, read books of any genre and search out antique treasures.

During my career at KJRH 2 Works for You, I have produced, written and hosted several award-winning documentaries dedicated to health and welfare issues.

"2 for the Cure: Life Stories" focused on three women battling breast cancer. They were truly inspiring, courageous women who offered tremendous support and encouragement during my own mother's fight with breast cancer. After that project, my photographer, Aaron McColloch, and I developed another documentary on four people fighting four types of cancer. These programs won state, regional and national awards; including the prestigious Edward R. Murrow Award from the RTNDA.

A short time later, I spent an entire year producing and writing the documentary, "Shaking the Silence: Prevention, Awareness and Education of Shaken Baby Syndrome." Working with our talented photojournalists, I followed a young father from arrest to conviction to the day he reported to prison for fracturing the skull of his girlfriend's baby. My documentary team also followed two young parents struggling to cope with their baby's brain damage and health challenges after his babysitter shook him violently and dropped him in his crib. The Parent-Child Center of Tulsa, regional hospitals and several high schools later utilized the documentary to help raise awareness of the danger of shaking a vulnerable baby. "Shaking the Silence" won Best Documentary awards from the Society of Professional Journalists and the Oklahoma Association of Broadcasters.

I feel very fortunate to work in this field here at 2 Works for You. There is a wonderful team of producers, photographers and managers here who are dedicated to covering the news and work hard for our viewers.