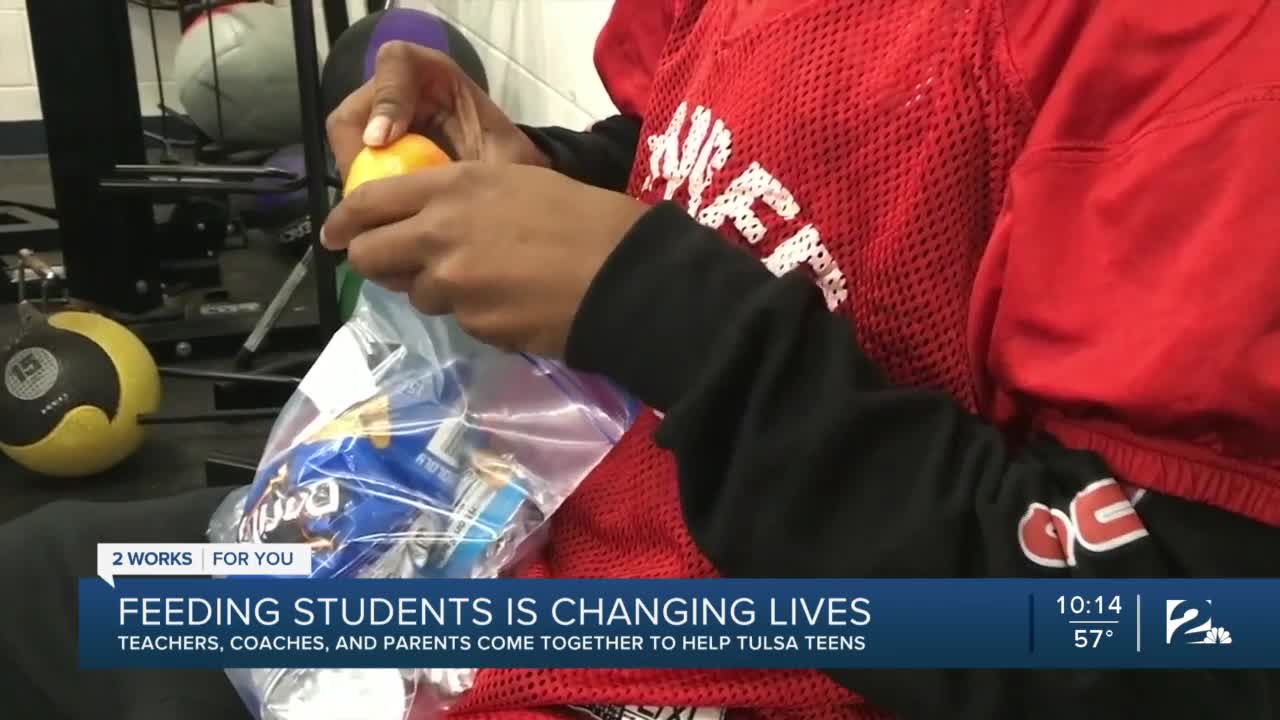 TULSA, Okla. — Three years ago, parents began to realize the effort happening at their local schools to keep students fed and determined in school and athletics. None of the parents had students of their at those schools, but they didn't hesitate to jump in to help.

Lynda Holt and Todd Kramer have decades of experience between them teaching at Tulsa's Nathan Hale High School. They've seen the school go through plenty of phases over the years, and know the struggles of some students who go there.

"A lot of them, there's not a meal at home. They don't know where their meal is coming from," Lynda Holt said.

Several years ago, Holt began a subtle mission to help keep students fed — a pantry in her room where anyone who was hungry could make sandwiches.

Holt and Kramer have made pushes over the years to get extra food into the school. It's one of the many ways instructors at Hale are helping their students in any way they can.

Hale track coach Walter "Coach B" Williams knows the struggles many of his athletes face all too well.

"I've been in their shoes," Coach B said. "Growing up, not knowing where my next meal is going to come from."

Williams gives his athletes rides when they have no way to get to and from home, helps them prepare for college, and supports them any other way they need, all out of his own pocket.

Three years ago, they got a boost they never saw coming.

Chantel Pettingell doesn't have any students at Hale, but heard about the school's situation from some of her own kids' friends. Pettingell sat down with Holt, Kramer, and Williams to find out how she could help, and took to social media that night to find anyone else who would.

"Without hesitation, the first thing out of all their mouths is they need food," Pettingell said in a video posted on Facebook three years ago.

"The response - it was immediate," Pettingell said.

It began with a request by Coach B for a refrigerator so he could store food for the track team.

"Within 48 hours, boom a brand-new refrigerator," Coach B recalled.

That became the trend - parents of students throughout Tulsa helping however they could.

"We have never seen a need go unfulfilled," Pettingell said.

Shortly after, the parents who were asking for ways to help found out athletes weren't getting pregame meals before track meets or games. Ever since, not a single game has gone by without pizza, fruit, snacks, sandwiches, or drinks waiting for the students at the school.

"What I've seen is they feel appreciated," Kramer said. "They feel loved, they feel wanted."

But the push to help kids isn't just happening at Hale.

"Some of the kids and some of the families, they have certain struggles that certain other schools don't have," said McLain head football coach Willie Ponder. "They may have woken up that morning and haven't had anything to eat."

A group of moms, calling themselves the Metro Moms, saw the same need happening at McLain. As they began helping the students where they needed it most, the parents began learning about those teens' struggles - ones they never could have imagined.

"It's hard to think about," Tamara Cornell said, "this athlete showed up late and said 'coach, I had to help my grandmother go to the bathroom, and I was struggling to figure out what to feed my younger siblings, and I had to ride my bike here."

Once those parents began getting to know the students they were feeding, something special began happening. The parents started seeing the kids as their own, wanting to do even more to help in school and life.

"As soon as you go one time, you feel like they are your kids," Cornell said.

That turned into helping the students study for standardized tests and search for colleges. Recently, Coach B went to the moms to figure out how to help a student who they had gotten into college, because he was going to arrive on campus with no supplies.

"Again within 48 hours, he had everything a kid could need in a dorm," Coach B said. "I'm talking school supplies, a fridge, bedding, everything."

When students arrive at Hale and McLain, they have no way of expecting these perfect strangers are waiting to help however they can. But by the time they're seniors, like Jordan Smith and James Lane at Hale, the efforts made by their teachers, coaches, and team moms have made all the difference.

"There's a lot of people that look down on this school and think it's bad... but then you have these people inside the school pushing the kids to keep furthering on," Smith said. "It makes a big difference because it opens my eyes to see you have people out there who really care about you."

"Just, thank you very much for everything; I wouldn't be able to be here without them," Lane said. "They all helped me in my high school career in some way."

If you would like to join the effort to help kids in your community, you can contact the groups at Hale or McLain, or support the students who have graduated through the Alyssa Marie Foundation.