The life and character of John McCain in his own words: Memorable quotes from the late senator 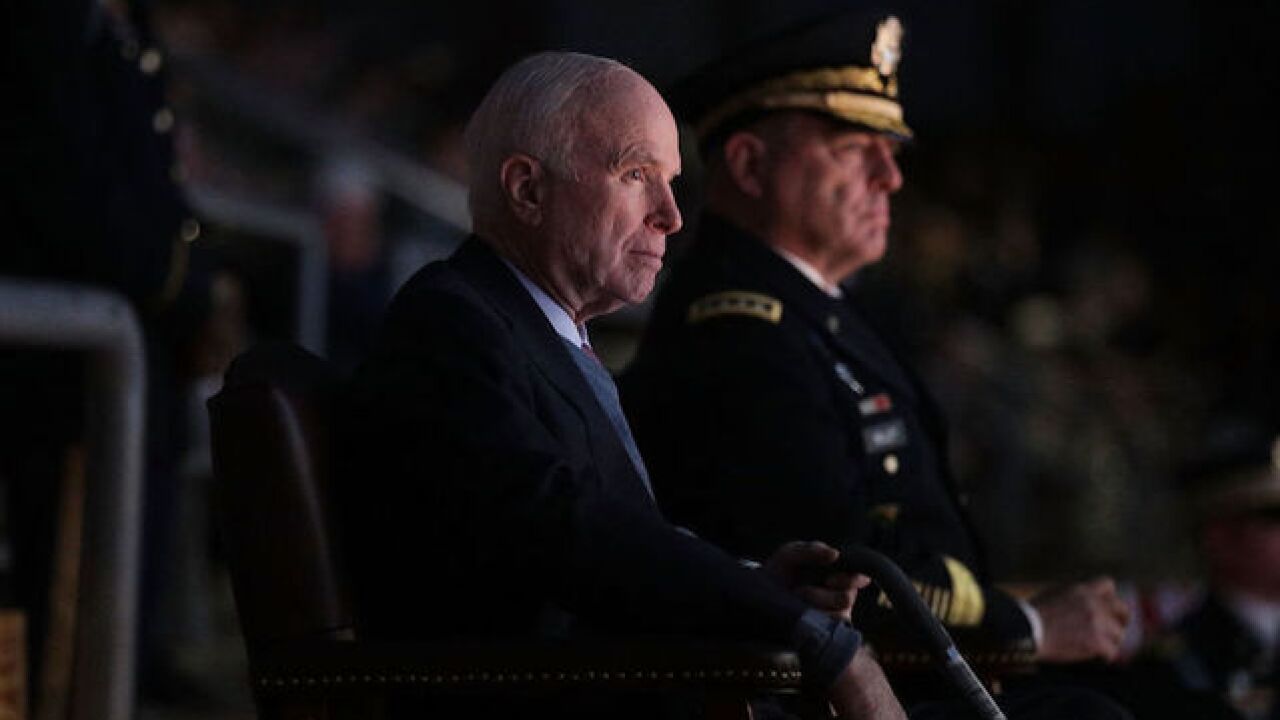 Image copyright 2017 Getty Images. All rights reserved. This material may not be published, broadcast, rewritten, or redistributed.
Alex Wong
<p>U.S. Army Chief of Staff Gen. Mark A. Milley (R) and Sen. John McCain (R-AZ) (L) watch a special Twilight Tattoo performance November 14, 2017 at Fort Myer in Arlington, Virginia. Sen. McCain was honored with the Outstanding Civilian Service Medal for over 63 years of dedicated service to the nation and the U.S. Navy. </p>

John McCain was admired by supporters and adversaries for his bravery as a military warrior and his courage to rise above party politics.

Here are some of the late senator's more memorable comments:

After his capture in North Vietnam

When given a chance to send a message back home after his A-4 Skyhawk was shot down in 1967 and he was captured in North Vietnam, he said:

"I would just like to tell my wife I'm, I'll get well. I love her, and hope to see her soon. I appreciate if you will tell her."

In the late 1980s, Mo Elleithee, a Democratic campaign strategist who was 16 at the time, met the senator.

Mo Elleithee: "I'm honored to meet you even though I disagree with you."

McCain: "Well, I'm honored to represent you even though you disagree with me."

When running for President in 2000, he changed his public stance about the Confederate battle flag after he told South Carolina voters the banner stood as a symbol of heritage.

"I did not do so for one reason alone. I feared that if I answered honestly, I could not win the South Carolina primary. So I chose to compromise my principles. I broke my promise to always tell the truth."

Speaking up for Obama

A man said on the 2008 campaign trail that he had concerns about Barack Obama, telling McCain, "We're scared of an Obama presidency ... I'm concerned about someone that cohorts with domestic terrorists ..."

McCain responded, amid boos, "I have to tell you he's a decent person, and a person that you do not have to be scared of as President of the United States."

"I fell in love with my country when I was a prisoner in someone else's. I loved it not just for the many comforts of life here. I loved it for its decency; for its faith in the wisdom, justice and goodness of its people. I loved it because it was not just a place, but an idea, a cause worth fighting for. I was never the same again. I wasn't my own man anymore. I was my country's."

Getting back up after losing a presidential election

"I remind all my colleagues: We had an election. I think the message the American people are sending us now is they want us to work together, and get to work."

On being called a maverick

"That was a label that was given to me a long time ago. I don't decide on the labels that I am given. I said I have always acted in what I think is in the best interests of the state and the country, and that's the way that I will always behave."

Reaching across the aisle

Less than two weeks after surgery to remove a blood clot revealed McCain had brain cancer, he returned to the Senate to vote against his party's effort to repeal the Affordable Care Act. That night, he delivered an epic 15-minute speech .

"Our deliberations today -- not just our debates, but the exercise of all our responsibilities -- authorizing government policies, appropriating the funds to implement them, exercising our advice and consent role - are often lively and interesting. They can be sincere and principled. But they are more partisan, more tribal more of the time than any other time I remember. Our deliberations can still be important and useful, but I think we'd all agree they haven't been overburdened by greatness lately. And right now they aren't producing much for the American people."

Remembering his tough times in Annapolis

"My superiors didn't hold me in very high esteem in those days. Their disapproval was measured in the hundreds of miles of extra duty I marched in my time here," McCain told Naval Academy graduates at Annapolis, Maryland, last year.

Reflecting on his decades-long political history

After he was awarded the National Constitution Center's annual Liberty Medal in 2017 for his lifetime of sacrifice and service to the nation, he delivered a pointed speech.

"I've had the good fortune to spend 60 years in service to this wondrous land. It has not been perfect service, to be sure, and there were probably times when the country might have benefited from a little less of my help. But I've tried to deserve the privilege as best I can, and I've been repaid a thousand times over with adventures, with good company, and with the satisfaction of serving something more important than myself, of being a bit player in the extraordinary story of America. And I am so very grateful."

In an interview with "60 Minutes," he discussed the way he wanted to be remembered.

"I want ... when I leave, that the ceremony is at the Naval Academy. And we just have a couple of people that stand up and say, 'This guy, he served his country.'"