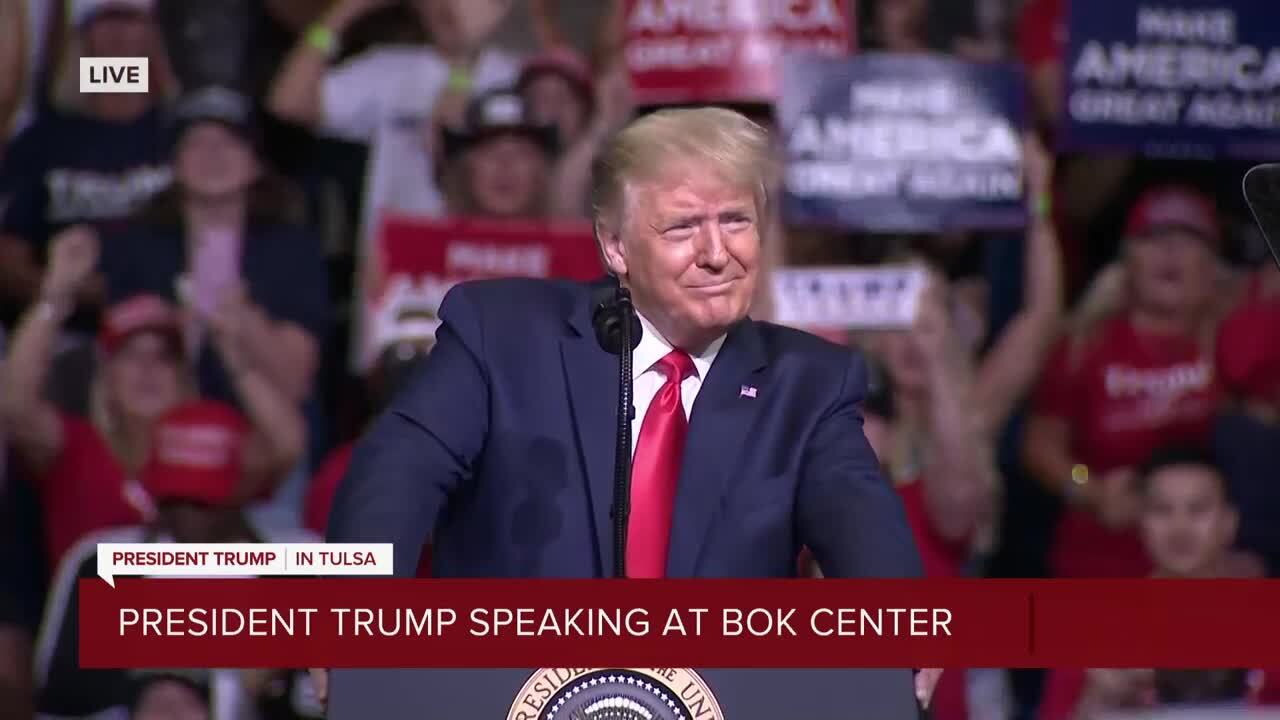 June 21st
12:45 p.m.
The Tulsa Fire Department confirmed the crowd at the BOK Center for President Trump's rally was just under 6,200.

Sunday morning Tulsa mayor G.T. Bynum posted on his official Facebook page to thank Tulsans for coming together as a community.

June 20th
10:15 p.m.
Juneteenth street party in the Greenwood District, protesters from the rally walked to the area but peacefully dispersed.

9:55 p.m.
Several 2 Works for You reporters are in downtown Tulsa with updates on the crowds in different areas, including Greenwood District and 4th and Boulder.

9:00 p.m.
Tulsa police said there are several groups protesting downtown and overall they have all been peaceful.

7:08 p.m.
One person arrested outside of President Trump's rally.

WATCH below for 2 Works for You's Erin Conrad details on the arrest and protesters outside the BOK Center.

“President Trump is rallying in Tulsa with thousands of energetic supporters, a stark contrast to the sleepy campaign being run by Joe Biden from his basement in Delaware. Sadly, protesters interfered with supporters, even blocking access to the metal detectors, which prevented people from entering the rally. Radical protesters, coupled with a relentless onslaught from the media, attempted to frighten off the President’s supporters. We are proud of the thousands who stuck it out.”

2 Works for You is working to confirm these statements.

6:08 p.m.
President Donald Trump arrived in Tulsa. State and local leaders greeted him at the plane. Sen. Jim Inhofe and the president hugged as they said hello.

Trump is en route to the arena.

WATCH President Trump as he arrived in Tulsa:

5:40 p.m.
CNN confirmed that the president and vice president will not be speaking to the crowd outside as previously announced.

4 p.m.
Conversations with the supporters and protesters grew heated, but remained calm.

EMSA issued a medical heat alert after responding to 5 heat related calls in the Tulsa area. They urge people to take precautions if they have to be outside.

President Donald Trump, along with Vice President Mike Pence, will appear in Tulsa on Saturday evening at a "Make America Great Again" campaign rally at the BOK Center at 7 p.m.

Visitors downtown will be greeted by a baby Trump balloon that is on the roof of The Shrine at 18th and Boston.

The state health department announced 331 new cases of COVID-19 in the state in Saturday morning's report.

The BOK Center venue is expected to be maximum capacity -- that's about 19,000 people. Officials say overflow will be going to the Cox Business Center. Crowds of thousands are expected in the city.

President Trump tweeted Thursday warning protesters, and others, prior to the rally in Tulsa.

Any protesters, anarchists, agitators, looters or lowlifes who are going to Oklahoma please understand, you will not be treated like you have been in New York, Seattle, or Minneapolis. It will be a much different scene!

The City of Tulsa released extensive traffic and logistic plans Thursday ahead of Juneteenth events and President Donald Trump's campaign rally this weekend. City officials said pedestrian access on Saturday in the closed-off areas around the BOK Center is limited to rally ticket holders.

2 Works for You will be covering Trumps rally starting at Noon on Saturday throughout the remainder of the evening. Click here to see how you can stay up-to-date on all platforms at all times.