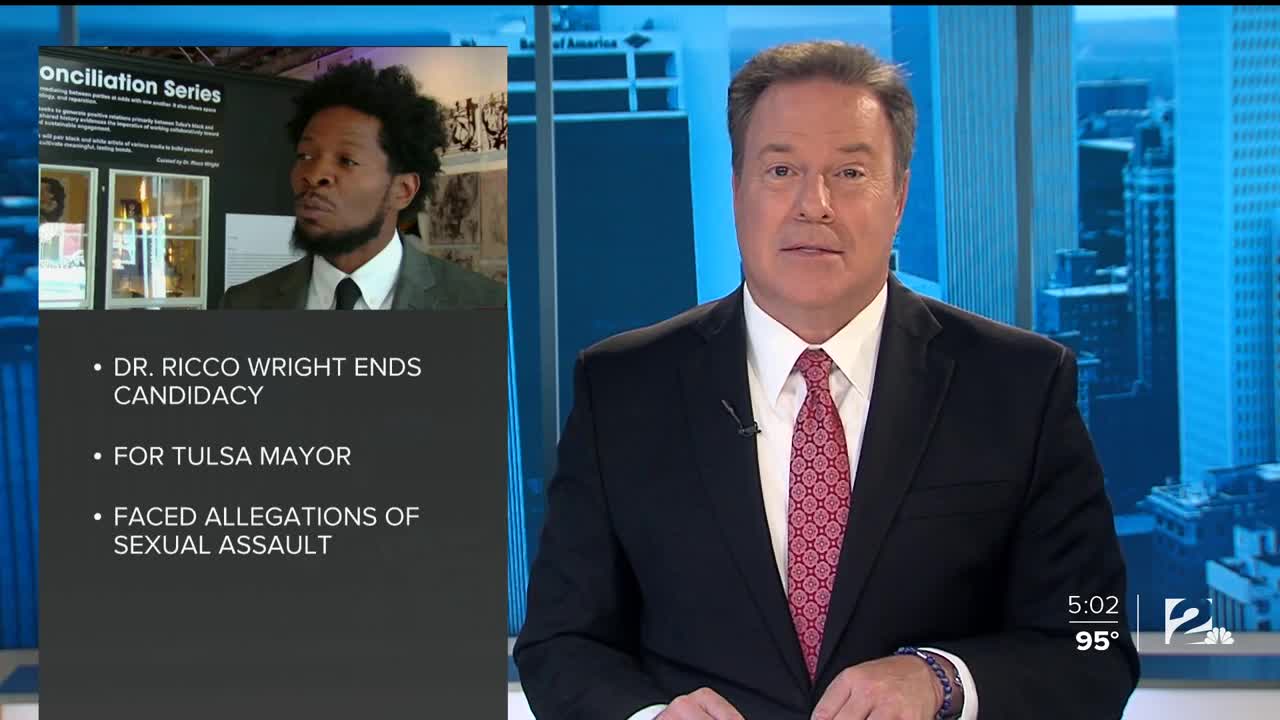 TULSA, Okla. — There's one less candidate in the race for Tulsa mayor.

Wright released the following statement on his Facebook page:

The deadline to officially withdraw as a 2020 mayoral candidate was June 12 at 5 p.m., according to the Tulsa County Election Board.

The election board said they have not heard directly from Wright’s campaign about his personal decision to withdraw from the race.

His name will still be on the ballot during the August election.

Laura Voth, the alleged Victim released a statement today in response to Wright's decision to end his campaign on Saturday.

Sexual battery is a crime and by calling my attack a distraction Dr. Ricco Wright makes a statement against unity as it devalues and isolates all persons who have experienced sexual violence that deserve to be heard and cared for regardless of timing.

As previously noted in my press conference, I address my purpose for coming forward at this time as a civic responsibility to bring to light the abusive actions of a mayoral candidate and leader in the Tulsa community. I believe that mine was not an isolated incident and hope to prevent others from being hurt while opening up a conversation providing other victims with a safe space to voice their hurt by Dr. Ricco Wright.

While I agree with Wright’s decision to receive therapy, I believe he still needs to be held accountable within the law for his crime of sexual battery that he admitted to at a press conference and then went back on in his statement to withdraw for mayor by calling the incident “alleged”.

He said he was roofied and does not remember remember the night Laura Voth said he assaulted her on Dec. 18, 2018.

I don’t believe his behavior that night is consistent with having been “roofied.” According to Laura, she and him carried on a thirty minute conversation about art before he battered her repeatedly. Rophynol is a sedative, and based upon her statement I would characterize his behavior as being aggressive. Laura is hopeful he also gets his opportunity for due process in court.

A few former colleagues of Wright have issued public statements saying they believe Laura Voth, Wright's first public alleged accuser. Josh Norrid says he was working with Wright on a vinyl store project associated with Wright's gallery for about six weeks. He said that he witnessed Wright acting, "touchy feely," with other females in a way that was inappropriate. Norrid shared his statement on Facebook, June 26.

"Every man has a time in his life where he must make a decision of what he stands for and for me that time has come with the revelation that my current employer has been [accused] with sexual assault with a woman in our community. This is why as of today, I tender my resignation," Norrid said. "I believe you, Laura."

Brett Swab, Wright's attorney said, "Wright is taking responsibility for his actions on the night of December 18, 2018, but we do not believe there was any criminal activity."

The Tulsa Police Department is investigating Voth’s allegations against Wright.

There are no charges filed in the case.