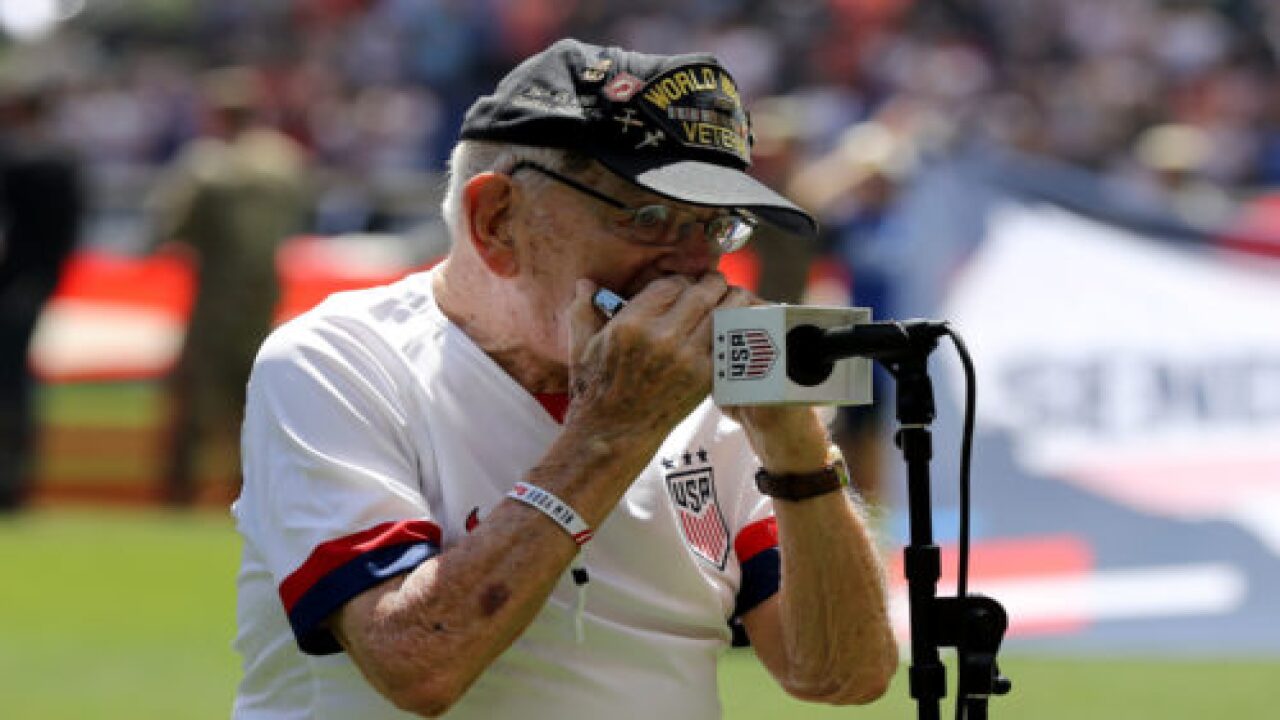 Madison Square Garden has seen its share of legendary musicians through the years, from Elvis to Stevie Wonder— but on Sunday a new star emerged: Pete DuPré, a 96-year-old World War II veteran, silenced a basketball crowd with his rendition of “The Star-Spangled Banner.”

DuPré performed the anthem before the New York Knicks versus Cleveland Cavaliers game. Standing before a huge U.S. flag carried by an Air Force honor guard, the Army vet rose from his wheelchair and busted out a golden harmonica as the crowd went quiet. Toward the end of the song, the usual whoops and cheers went up, and DuPré mouthed a humble “Thank you.”

Here’s a pic of DuPré, who is also known as “Harmonica Pete,” and his golden Hohner harmonica, from the @catholiccourier Instagram account.

DuPré served as a medic during the war, caring for wounded soldiers at a base in the United Kingdom. According to the Washington Post, DuPré joined the Army after both of his parents died when he was just 17. He was then responsible for his younger siblings, but he spent three years overseas during the conflict.

The vet told the Post he started playing harmonica as a child after his family moved to a new town. He thought the instrument would help him make friends at school.

“I used to go into the only room we had that had tile,” he said in the Post. “I used to go in, close the door and sit on a seat in the middle of the room and learn what noises came out what hole in the harmonica. I never had any lesson. I do not know anything about music.”

Well, it seems like he knows a little something about the harmonica, at least! And he certainly has made some friends along the way. Before dazzling the crowd at a U.S. Women’s National Team soccer match earlier this year, he’d met the team at a memorial in Normandy, France. The upstate New York resident has also played the anthem for the Minnesota Vikings and before the 2016  NHL All-Star Game in Los Angeles.

Here’s his soulful version of “The Star-Spangled Banner” from Sunday’s Knicks game, as posted by the @nyknicks Twitter page.

A special performance of the national anthem from WWII veteran Pete DuPré on #HoopsForTroops Night presented by @budweiserusa pic.twitter.com/66QbQ0gf1p

He got plenty of attention after playing the anthem at the May USWNT game — The Washington Post said that his performance there, posted to Facebook and Twitter, amassed more than 9 million views within just a few days — but now DuPré’s fame is spreading. Hopefully we’ll see much more of this talented patriot.

(P.S.: If you need more Harmonica Pete in your life, he’s got an album of Christmas music available on iTunes.)

Pete DuPré, thank you for your service!