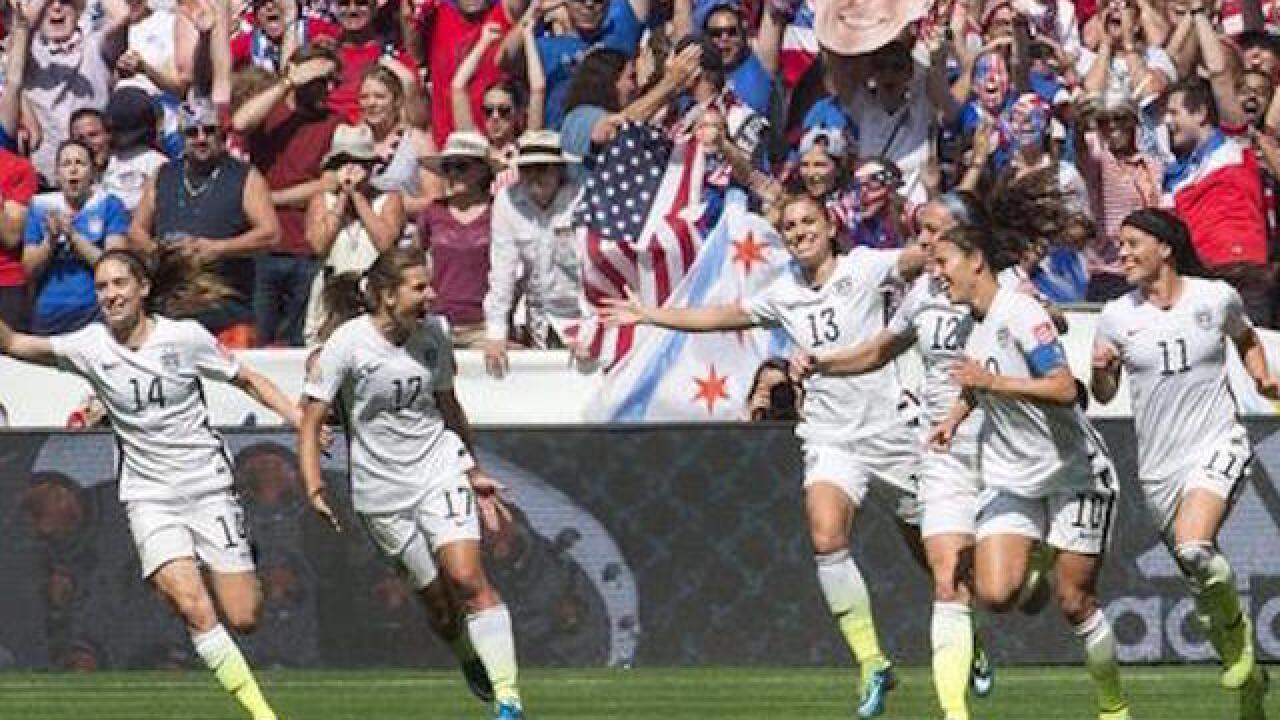 Five players from the World Cup-winning U.S. national team have accused the U.S. Soccer Federation of wage discrimination in an action filed with the Equal Employment Opportunity Commission.

Alex Morgan, Carli Lloyd, Megan Rapinoe, Becky Sauerbrunn and Hope Solo maintain in the EEOC filing they were paid nearly four times less than their male counterparts on the U.S. men's national team. The filing was announced Thursday in a statement from the law firm representing the players.

"The numbers speak for themselves," Solo said in a statement. "We are the best in the world, have three World Cup Championships, four Olympic Championships, and the USMNT get paid more just to show up than we get paid to win major championships."

The union representing the players is currently involved in a legal dispute with U.S. Soccer over the terms of their collective bargaining agreement. The federation filed a lawsuit this year seeking to clarify that its contract with the U.S. Women's National Soccer Team Players Association runs through the Rio Olympics until Dec. 31. The union maintains the memorandum of understanding agreed to in March 2013 can be terminated at any time.

Attorney Jeffrey Kessler, one of the attorneys representing the players, claimed that the state of the negotiations over the CBA created the need for the women to act in hopes of ending what they say is the "discriminatory and unfair treatment" they have endured for years.

"The reality is that this team is more valuable to the USSF than the men's team has been. That's what the facts show," Kessler said on a conference call with reporters. "And they would be justified in asking for more than the men are receiving. But the first step that they are seeking is equal treatment. That should be an easy step for the USSF to take."

U.S. Soccer issued a statement saying it had not seen this complaint and couldn't comment on specifics, but added it is "disappointed" with the action.

"We have been a world leader in women's soccer and are proud of the commitment we have made to building the women's game in the United States over the past 30 years," the statement said.

Many players on the national team have become increasingly vocal about gender equity in the sport, something that came to light in advance of last year's World Cup in Canada. A group of players led by Abby Wambach filed a complaint in Canada about the artificial turf playing surface, noting the men's World Cup is played on natural grass.

After the women won the World Cup with a 5-2 victory over Japan in the final, the turf issue arose again during a victory tour when a game in Hawaii was canceled because the artificial turf was deemed unsafe.

Morgan said it wasn't only one factor that brought the players to file the complaint.

"It's the right step for us in moving forward with this team," she said.

The team, which has qualified for this summer's Olympics in Brazil, is currently in Florida training for a pair of exhibition games against Colombia.