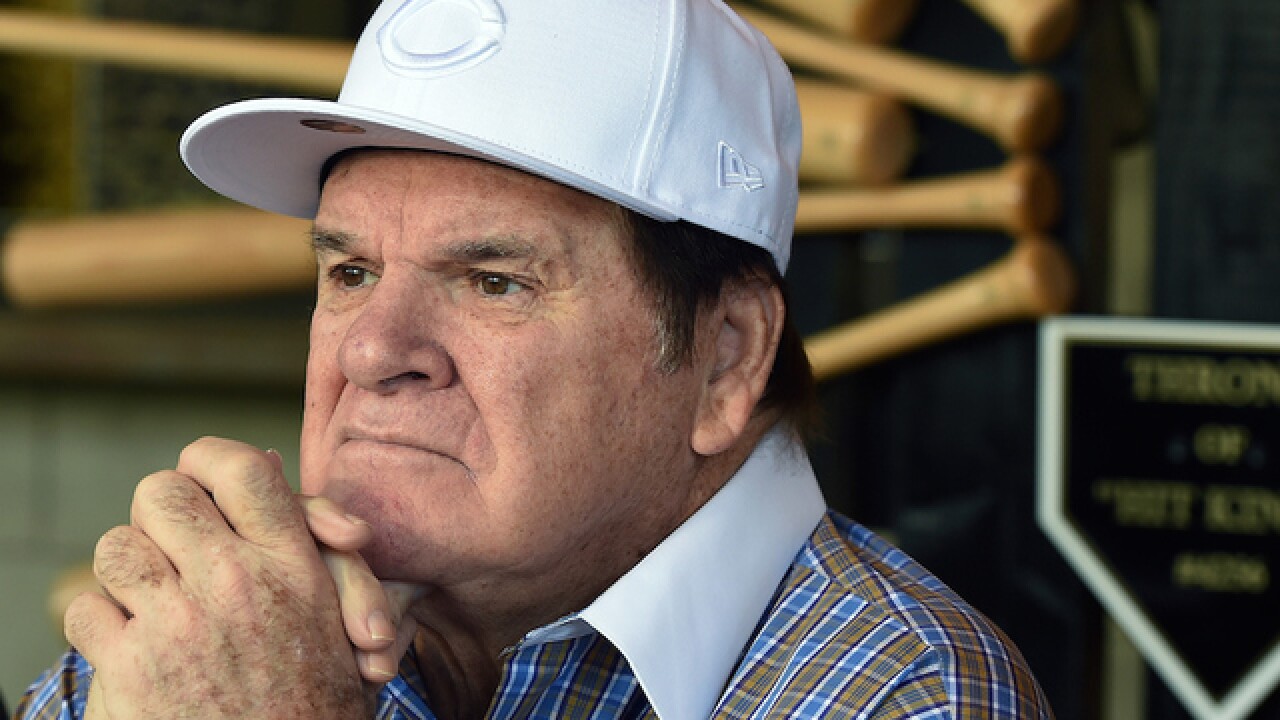 CINCINNATI (AP) — Pete Rose is getting a hall of fame induction: in the Cincinnati Reds' team hall, during a weekend of honors this summer in his hometown that will include retiring his No. 14.

The Reds' announcements Tuesday came after MLB commissioner Rob Manfred last month rejected Rose's application for reinstatement to baseball. Manfred concluded that baseball's career hits leader hasn't shown evidence of "a reconfigured life" and continued to gamble, even while seeking to end the lifetime ban imposed in 1989 for betting on numerous Reds games while playing for and managing the team.

Reds' chief executive Bob Castellini said Manfred approved the team's plans to honor Rose, 74. The June 24-26 events will also feature a 40-year reunion of the 1976 world champion Reds, on-field ceremonies, and a team hall of fame banquet in which Rose will be awarded the red sports coat its members wear.

"This is an honor, that you can't just believe how you feel," Rose said at a news conference, noting that he grew up a Reds fan and was born a few miles from the Great American Ball Park where he will be honored. He broke into baseball as a Red, played most of his career with them, and also managed the team.

The National Baseball Hall of Fame in 1991 adopted a rule keeping anyone on the permanently ineligible list off the ballot. Manfred said last month that his decision continuing the MLB ban was separate from any determination on National Baseball Hall of Fame eligibility. He added that while Rose remains banned from working for any major league team or minor league affiliate, he could make ceremonial appearances with the commissioner's approval.

"Pete was told that in the immediate future, he probably is not going to be able to look in terms of Cooperstown," Castellini said Tuesday. "And we certainly wanted to make sure that we picked up that vacuum. The commissioner gave us permission to do that; we couldn't be more pleased that it is now. Now's the time."

An MLB spokesman confirmed Tuesday that the Reds had submitted ceremonial plans that were approved.

Rose offered his thanks to Manfred, while adding that he still holds out hope for some day joining the national hall.

"I haven't given up on Cooperstown. I'm not the type who's going to give up on anything," he said. "But this is fine, I'm happy ... I'm not going to sit here and say it's the second-best thing, cause it's not ... I'm from Cincinnati. This is the first big thing."

Rose has rejoined his teammates from the 1975-76 world champions in recent years in on-field reunions and other ceremonies in Cincinnati. Castellini said there are plans, although the timetable is uncertain, of adding a Rose statue to those of all-time Reds greats outside Great American Ball Park. His "Big Red Machine" teammates Johnny Bench, Joe Morgan and Tony Perez already have statues.

Rose is joining those three National Hall of Famers in the 85-strong Reds' hall that includes the late manager Sparky Anderson and much of the rest of the '75-76 team. He's the last of the regular starting eight fielders that also had David Concepcion, George Foster, Cesar Geronimo and Ken Griffey Sr. to be named to the Reds' hall.

Ken Griffey Jr., who will join the National Hall this summer, was in the club's last induction class in 2014.

Rick Walls, executive director of the Reds Hall of Fame & Museum, said the hall's board amended bylaws to allow Rose's eligibility and voted to make Rose the only 2016 inductee.

The Reds will host the San Diego Padres during Rose's induction weekend. That's the team he broke Ty Cobb's career record against in 1985 with hit No. 4,192. The 17-time All-Star ended his career with 4,256 hits.