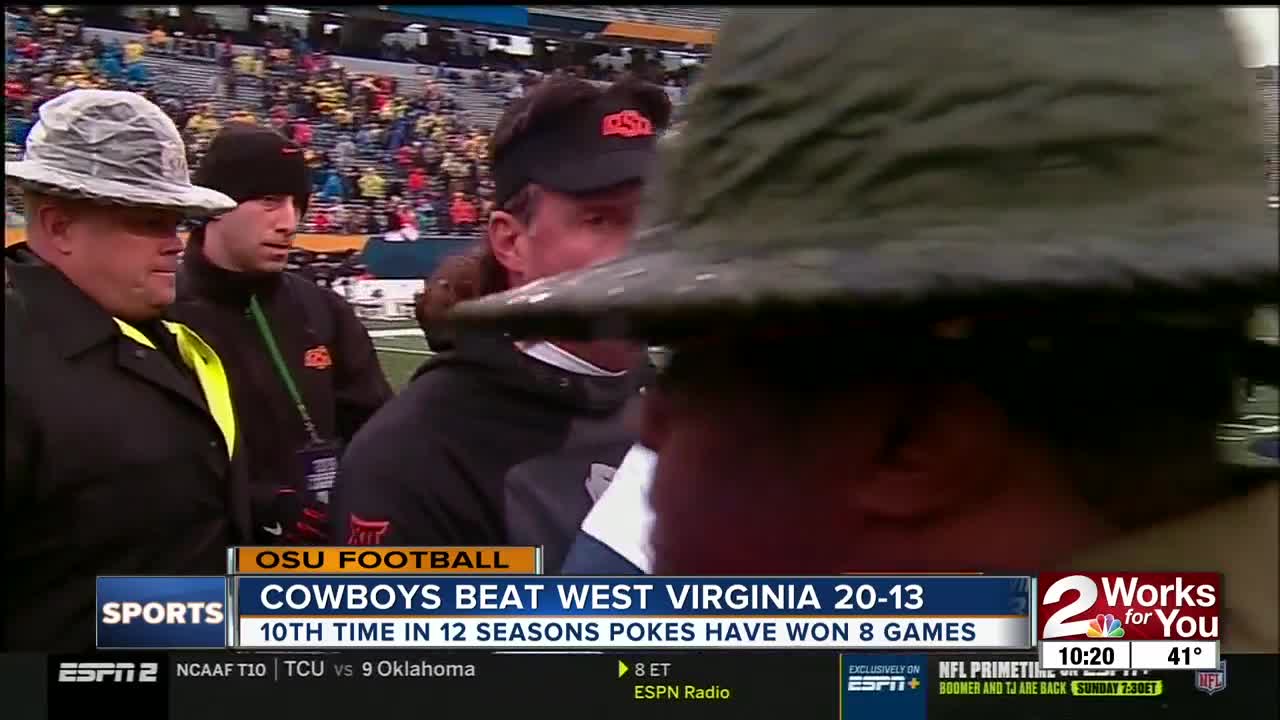 The Oklahoma State Cowboys beat West Virginia 20-13 and have now won at least 8 games in 10 of the last 12 seasons.

MORGANTOWN, W.Va. (AP) — Here’s something else to add to the conversation for Chuba Hubbard’s Heisman Trophy chances: The nation’s rushing leader is a solid receiver, too. Hubbard set career highs with seven catches for 88 yards Saturday in No. 22 Oklahoma State’s 20-13 win over West Virginia. Oh, and the sophomore also surpassed 100 yards rushing for the ninth consecutive game to push his total to 1,832 yards.

Hubbard entered the game with 82 receiving yards all season and Gundy had emphasized earlier in the week he didn’t throw to Hubbard that often out of fear of injury.

But Gundy said West Virginia took away Hubbard’s effectiveness on the ground early.

“It forced us into throwing the ball to him some, more so than him running,” Gundy said. “It worked out good for us.”

Hubbard said it doesn’t matter how he gets the ball.

“I just try my best to get first downs and score,” he said. “I was just trying to do my job and make something happen.”

Hubbard ran 26 times for 106 yards, far below his 173-yard average, but he ran for 47 yards on two key second-half drives that helped Oklahoma State take control.

Dru Brown marched Oklahoma State the length of the field early in the fourth quarter, hitting Dillon Stoner with a 2-yard scoring pass for a 17-13 lead.

“I was really proud of Dru, the way he took care of the ball and didn’t turn it over,” Gundy said.

The Mountaineers couldn’t convert on three plays from the 1-yard line in the second quarter and they twice had to settle for short field goals.

Leddie Brown converted a fourth-and-1 from the Oklahoma State 18 with 2:37 left in the game. But Jarret Doege threw three incompletions, the Mountaineers turned the ball over on downs and Oklahoma State ran out the clock.

“Just too many missed opportunities. That sums it up,” Neal Brown said. “Credit them. They made enough plays at the end of the game.”

Oklahoma State: The Cowboys were outgained 333-285 but managed to make the most of it. Dru Brown, a graduate transfer from Hawaii, completed 22 of 29 passes for 196 yards in place of the injured Spencer Sanders.

West Virginia: The Mountaineers lost for the sixth time in seven games and their bowl hopes are over. A defense that looked impressive against Hubbard in the first half gave him just enough room to break free after halftime and the offense was limited to 128 yards and three points after halftime.

Gundy stayed behind in Stillwater, Oklahoma, on Friday night to watch his son, Gunnar, win a state semifinal playoff game. Gunnar Gundy is a senior quarterback at Stillwater High School.

“Those are special times for me,” Gundy said. “I’ve missed a lot of his games. It’s just not something I could pass up on.”

Mike Gundy flew to West Virginia afterward to join his players and coaches.

“I bet half the guys didn’t even know I wasn’t there,” he said. “And if they can’t take care of themselves for about seven or eight hours, we got serious issues.”

The Cowboys could move up a spot or two in The Associated Press poll that comes out on Sunday.

Oklahoma State plays No. 8 Oklahoma in the Bedlam game next Saturday in Stillwater, Oklahoma.

West Virginia finishes its season at TCU on Friday.