DONATE NOW: If You Give A Child A Book
SportsLocal Sports 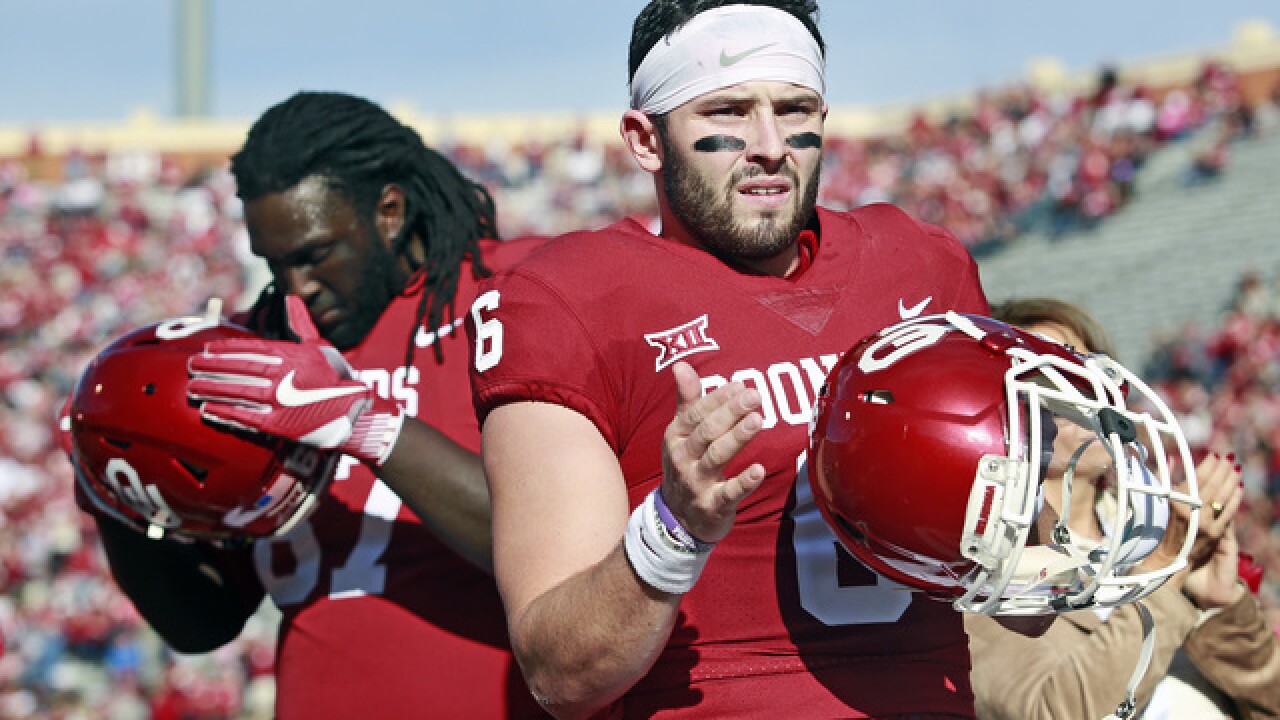 LOS ANGELES (AP) -- An illness has slowed down Baker Mayfield for the past few days, and Oklahoma's Heisman Trophy-winning quarterback has missed a handful of public events leading up to the Rose Bowl.

Georgia's defense is taking no comfort in Mayfield's condition.

"Oh, I'm sure he'll be in that game," said Roquan Smith, Georgia's star linebacker. "It's going to be big playing against him. I'm a big college football fan, and he's a winner. I've been hearing about him for a long time."

The Bulldogs realize their national title hopes depend on figuring out how to contain one of the most dynamic players in their sport's recent history. With weeks of disciplined study and some practice help from a scout-team quarterback dubbed Mayfield's Mini-Me by his teammates, Georgia thinks it has got a shot.

Georgia has heard and seen everything that the rest of the country knows about Mayfield, who won the Heisman in a landslide vote earlier this month to cap a phenomenal senior season.

And even if he's under the weather this week, the Bulldogs expect him to be on top of his game Monday.

"I can remember when Michael Jordan had the flu once," Georgia defensive coordinator Mel Tucker said. "They were having to carry him off the floor during timeouts, and he had one of his best games. I expect Baker Mayfield to be at his best."

Big 12 champion Oklahoma (12-1) will bring a potent, versatile offense into Pasadena when the Sooners face SEC champion Georgia (12-1) in the College Football Playoff semifinal. But that offense is driven by Mayfield, the swashbuckling passer with running ability and a virtuosic knack for avoiding trouble -- well, at least on the field and between the whistles.

"He can throw the ball in locations on the run that you don't see too many guys do," Smith said.

Mayfield's athleticism and football smarts are a formidable mix for any defense, but Georgia has an underlying confidence about its ability to slow down any offensive playmaker after plowing through the regular season by allowing more than 20 points just twice in 13 games.

The Bulldogs are still playing all proper respect to Mayfield during their week in Southern California.

"Their quarterback, he's just a special guy, and he makes a lot of things happen," Tucker said. "He reminds me of Brett Favre, because he makes all the throws, he's mobile and he can improvise on the run. He will run to run you over, and he will also slide, so you have to be ready for all of that."

Tucker doesn't claim to have a secret formula or a brilliant game plan for shutting down Mayfield, who passed for 4,340 yards and 41 touchdowns with just five interceptions. Instead, the Bulldogs have spent the past month drilling their basic defensive concepts tailored to a mobile quarterback with an impressively accurate arm.

"We always preach a coordinated pass rush," Tucker said. "You have to know when you can rush, and also where your teammates are. We also make sure our players downfield also know they have to cover for as long as it takes. You can't change too much of what you do in a situation like this. We've played other great quarterbacks this season, and we're going to have to be at our best against Oklahoma."

Another key to Georgia's ability to stop Mayfield could be Stetson Bennett, the Bulldogs' scout team quarterback.

Bennett is 6 feet tall, just like Mayfield, and he is doing a remarkable Mayfield impersonation. The fleet-footed freshman walk-on is the Bulldogs' fourth-string quarterback, but in practice, Bennett is "a beast," according to Tucker.

"If there was a Baker Mayfield Mini-Me, that's Stetson," Georgia safety J.R. Reed said. "He could play at any school in the country, but he's out here trying to make us better in practice. That's what I love about him."

Bennett's speed and elusiveness have been showcased by the Georgia coaching staff. The Bulldogs' scout team can provide impressively accurate renditions of Mayfield's top tendencies, such as his slick ability to move forward through a collapsing pocket before making a throw right at the line of scrimmage.