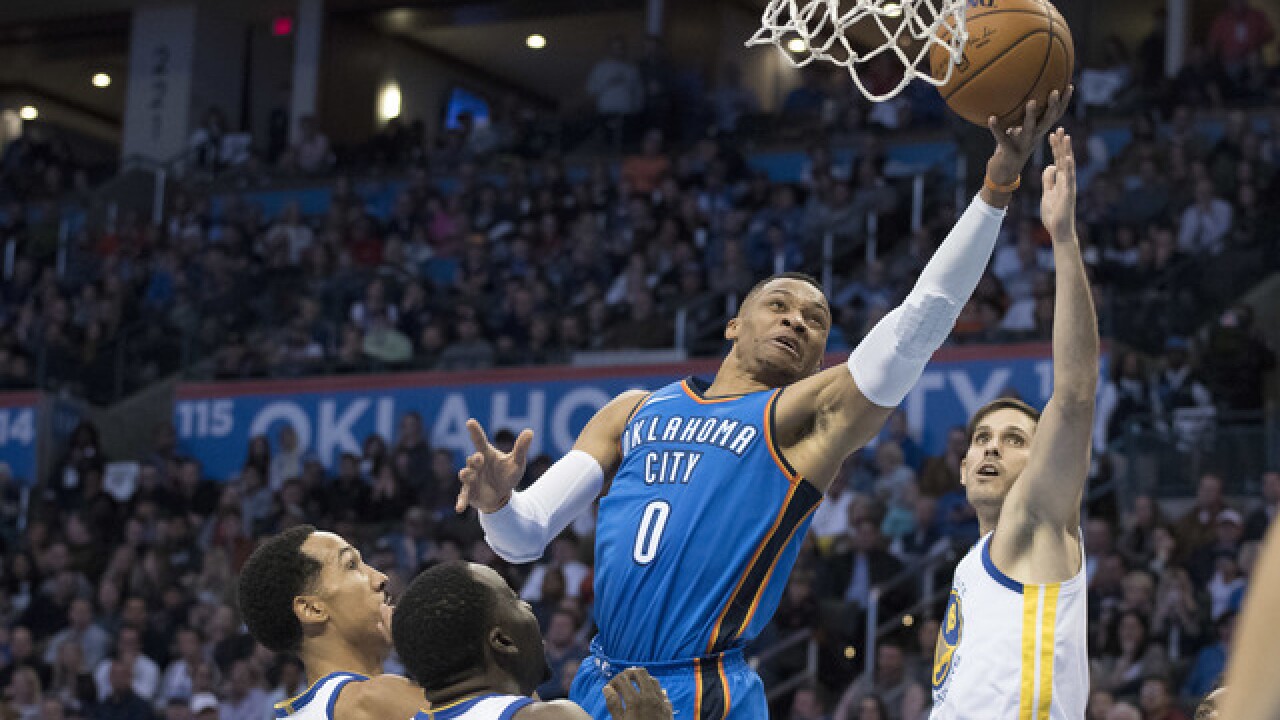 Image copyright 2017 Getty Images. All rights reserved. This material may not be published, broadcast, rewritten, or redistributed.
J Pat Carter
<p>OKLAHOMA CITY, OK - NOVEMBER 22: Russell Westbrook #0 of the Oklahoma City Thunder shoots over Omri Casspi #18 of the Golden State Warriors during the first half of a NBA game at the Chesapeake Energy Arena on November 22, 2017 in Oklahoma City, Oklahoma. NOTE TO USER: User expressly acknowledges and agrees that, by downloading and or using this photograph, User is consenting to the terms and conditions of the Getty Images License Agreement. (Photo by J Pat Carter/Getty Images)</p>

OKLAHOMA CITY (AP) -- Russell Westbrook said in the buildup before playing ex-teammate Kevin Durant and the Golden State Warriors that it was just another game.

The reigning MVP scored a season-high 34 points and added 10 rebounds and nine assists to help the Oklahoma City Thunder roll past the Warriors, 108-91 on Wednesday night.

It was Oklahoma City's first win over Golden State since Durant left the Thunder to join the Warriors after the 2015-16 season. Golden State won all four meetings last season by an average of nearly 20 points.

Westbrook, who usually is animated anyway, was more talkative on the court than usual. At one point in the third quarter, Westbrook and Durant went forehead to forehead and were called for double technicals. Westbrook downplayed the incident later.

"I play the same way every night if it's against Kevin or if it's against Detroit," he said. "It don't matter who it is. On the court I have no friends. The only friend I have is the basketball. That's it. And obviously my teammates, but I go out to compete and to guard and play at a high level. I've been that way since day one and that's what I do."

"Man, it's just ball," Durant said. "He's competitive, I'm competitive. We like to go at it, both of us, and that's just a part of the game."

Oklahoma City's fans are still sore over Durant's departure. They booed him nearly every time he touched the ball. He finished with 21 points on 8-for-17 shooting. Stephen Curry scored 24 points for the Warriors, who produced their second-lowest point total of the season.

"They're amazing talents," Curry said. "They've been playing at a high level in their careers all throughout. It's a little different. Obviously what Russ does is pretty much the same, but you've got to understand how they try to work off of each other and play solid one-on-one defense. For the most part, I don't think we did that well tonight, and you've got to be ready for that challenge because they do keep coming at you."

It was a much-needed victory for the Thunder, who have struggled to an 8-9 start.

The Thunder led 65-48 at halftime as Westbrook filled the stat sheet with 20 points, seven rebounds and six assists. Anthony had 16 points and George had 14 at the break.

Oklahoma City held the Warriors to 42 percent shooting in the first half and forced them into 10 turnovers. The home crowd gave the Thunder a standing ovation as they walked off the floor.

Early in the third quarter, Westbrook had a steal and dunk, then a steal and layup plus a foul that brought the crowd to its feet. He made the free throw to put the Thunder ahead 72-52. Oklahoma City led 94-71 at the end of the third and Warriors coach Steve Kerr pulled his starters with about eight minutes remaining.

"They got into a rhythm, the crowd got into the game, we turned the ball over and let them get off for easy layups," Durant said.

Warriors: Klay Thompson scored just nine points. He entered the game averaging 20.1. ... Kerr was called for a technical with 5:59 left in the third quarter. Draymond Green got one with 5:06 left in the third.

Durant: "The story's about the game. They kicked our (expletive), they played a great game. You should give them credit for how they played and we should be better. It's not about who's in each other's faces. That stuff is not real, so please don't believe it. All the fans, they're lying to you all."