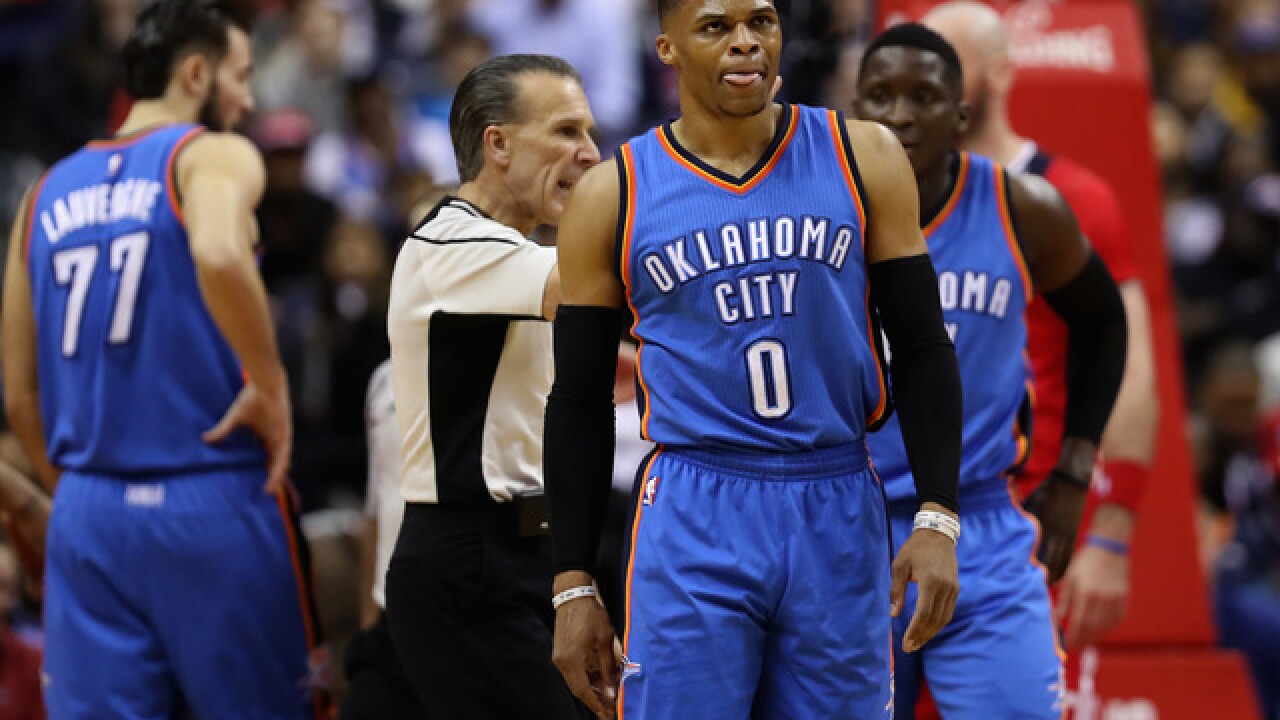 Copyright 2017 Scripps Media, Inc. All rights reserved. This material may not be published, broadcast, rewritten, or redistributed.
Rob Carr
<p>WASHINGTON, DC - FEBRUARY 13: Russell Westbrook #0 of the Oklahoma City Thunder reacts to a play against the Washington Wizards in the first half at Verizon Center on February 13, 2017 in Washington, DC. NOTE TO USER: User expressly acknowledges and agrees that, by downloading and or using this photograph, User is consenting to the terms and conditions of the Getty Images License Agreement. (Photo by Rob Carr/Getty Images)</p>

Westbrook had 21 points in the fourth quarter. He shot 7 for 19 from the field the first three quarters and was 7 for 10 in the fourth. He also had 11 rebounds and 11 assists in the 66th triple-double of his career.

Enes Kanter had 20 points and nine rebounds, and Steven Adams added 13 points and 10 boards for the Thunder, who won their third straight.

Anthony Davis scored 38 points and DeMarcus Cousins had 31 points and 10 rebounds, but he played just 22 minutes and fouled out while getting dunked on by Westbrook. The Pelicans fell to 0-3 since acquiring Cousins in a trade with Sacramento.

Davis scored 24 points in the first quarter to help the Pelicans take a 35-32 lead. Cousins, who missed most of the first quarter with foul trouble, scored 14 in the second, and the game was tied at 59 at the break.

Cousins picked up his fifth foul in the final minute of the third quarter, and the Thunder entered the fourth with an 87-84 lead.

Westbrook threw down the hammer dunk over Cousins and drew Cousins' sixth foul with 2:38 remaining. The free throw put the Thunder up 110-106. Another slam by Westbrook in the final minute put away the game.

Pelicans: Davis' 24 points in the first were the second-most points by a Thunder opponent in a quarter since the team moved to Oklahoma City for the 2008-09 season. Gerald Green scored 25 for Phoenix against the Thunder back in 2014. ... Cousins picked up a technical and two personal fouls in the first 95 seconds. It was his 18th technical this season and if not rescinded will trigger another one-game suspension. ... Pelicans coach Alvin Gentry and F Solomon Hill were called for technicals after the first half ended.

Thunder: It was Westbrook's fourth triple-double this season in which he scored at least 40 points. ... G Victor Oladipo missed his second straight game with back spasms. ... Westbrook was called for a technical in the first quarter. ... Oklahoma City outrebounded the Pelicans 53-35.