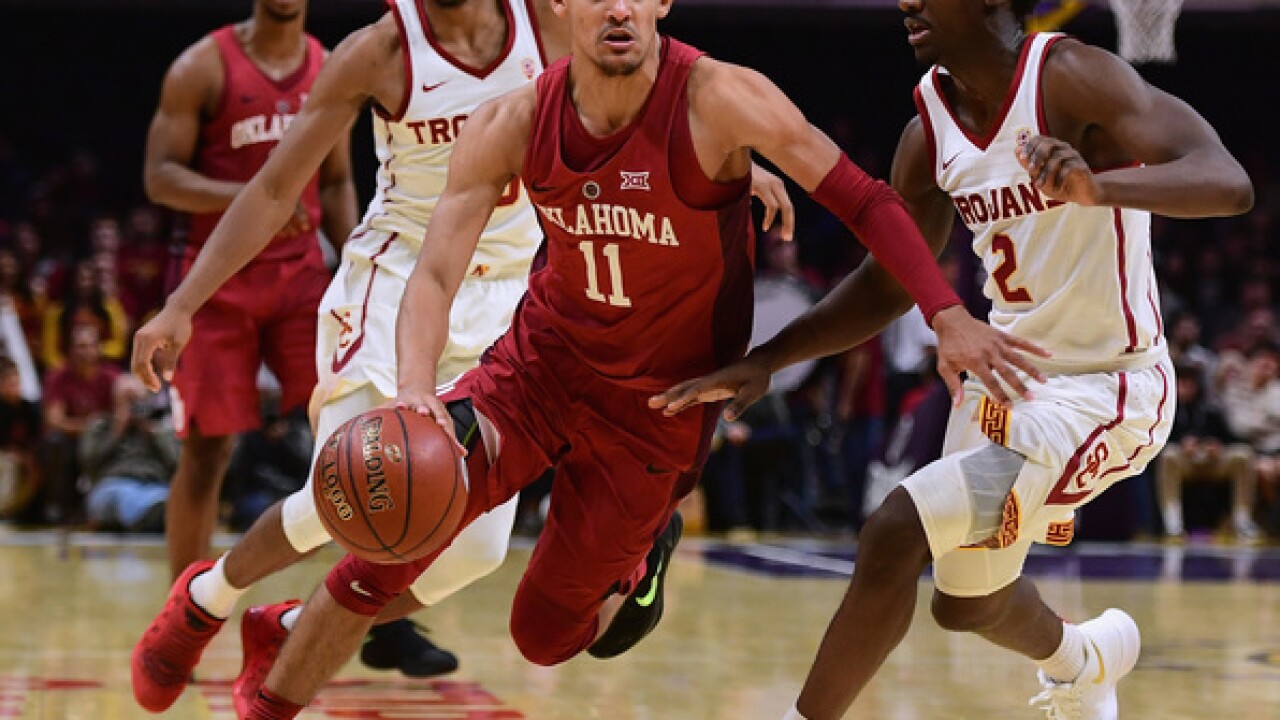 Image copyright 2017 Getty Images. All rights reserved. This material may not be published, broadcast, rewritten, or redistributed.
Harry How
<p>LOS ANGELES, CA - DECEMBER 08: Trae Young #11 of the Oklahoma Sooners drives on Jonah Mathews #2 of the USC Trojans in an 85-83 Sooner win during the Basketball Hall of Fame Classic at Staples Center on December 8, 2017 in Los Angeles, California. (Photo by Harry How/Getty Images)</p>

NORMAN, Okla. (AP) -- Freshman Trae Young had 26 points and a Big 12 Conference-record 22 assists as No. 17 Oklahoma rolled past Northwestern State 105-68 on Tuesday night in the Sooners' first game since moving into the Top 25.

Brady Manek added 22 points and Kameron McGusty had 15 for Oklahoma (9-1). The Sooners have won seven straight games - including an upset of then-No. 3 Wichita State on Saturday - and have scored 90 or more points seven times this season.

Thirteen of Young's assists came in the first half, breaking the Big 12 record for assists in a half formerly held by Baylor's Pierre Jackson (2013), Gottlieb (1999) and Johnson (1997). Young also broke Oklahoma's single-game assist mark, held by Johnson and Jan Pannell, who had 18 vs. Oklahoma City on Jan. 12, 1983.

Ishmael Lane led Northwestern State (3-7) with 17 points while Larry Owens had 16. The Demons have lost all seven of their meetings with Oklahoma, which is 39-4 against nonconference opponents at home under coach Lon Kruger.

Northwestern State kept the game close for about 4 minutes and led 11-9 on a layup by Owens at the 16:07 mark of the first half. The Sooners then seized control with a 20-1 run, going up 29-12 on a 3-pointer by Matt Freeman with 9:52 left before halftime.

The Sooners led 53-37 at halftime and steadily built on their advantage throughout the second half.

Young scored 20 or more points for the ninth straight game, the longest streak at Oklahoma since Buddy Hield did so during the 2015-16 season.

Northwestern State: This is a particularly brutal stretch for the Demons, who lost to NAIA No. 2-ranked LSU-Shreveport as part of a road swing that includes games at Oklahoma and Utah. The Demons soon will be able to reset their season with the start of Southland Conference play.

Oklahoma: The Sooners are as hot as any team in Division I, coming off their upset of Wichita State, and Tuesday's win kept their considerable momentum going with the start of Big 12 Conference play looming in less than two weeks.

Northwestern State: Must bounce back quickly for a game Wednesday at another major-conference foe, Utah, before beginning Southland Conference play on Dec. 28 at Nicholls State.

Oklahoma: Will host Northwestern on Friday in the final nonconference game of the season before its Big 12 opener at TCU on Dec. 30.