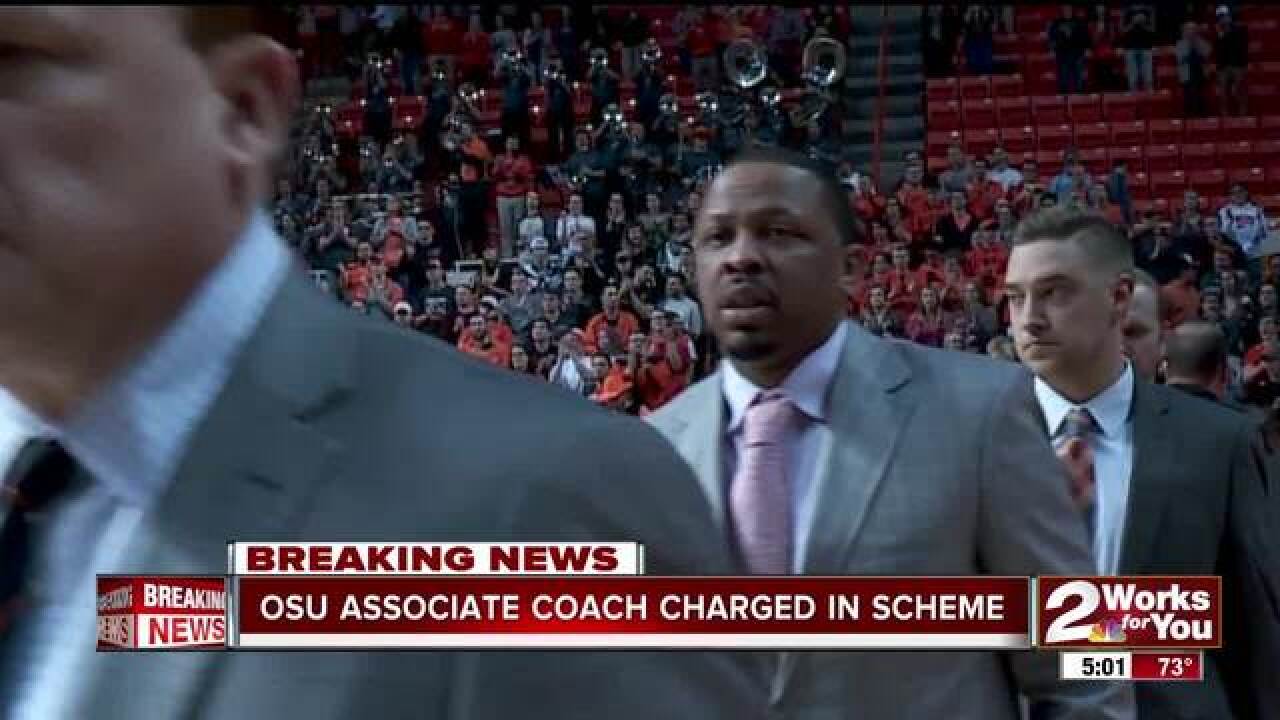 NEW YORK (AP) -- The Latest on fraud and corruption charges announced against people associated with college basketball (all times local):

The president of the NCAA says charges that bribes were exchanged to influence NBA-destined college stars' choice of schools, agents and financial advisers are "deeply disturbing."

Mark Emmert said Tuesday that the NCAA has "no tolerance whatsoever" for the behavior alleged by federal prosecutors.

Four assistant basketball coaches from Arizona, Auburn, the University of Southern California and Oklahoma State were among those arrested on federal corruption charges earlier Tuesday. Authorities say they were caught taking thousands of dollars in bribes to steer stars toward certain agents or advisers.

Emmert says coaches hold a "unique position of trust" between players and their families and that the allegations suggest "an extraordinary and despicable breach of that trust."

Also charged was the director of global sports marketing for basketball at Adidas.

Federal prosecutors say at least three top high school basketball players were promised payments of as much as $150,000 to attend two colleges that were sponsored by Adidas.

Investigators said some coaches at those schools encouraged those payments. No one from the schools was charged.

They say the payments were orchestrated by an Adidas executive and business advisers who hoped to work with the players after they turned professional.

A University of Miami spokesman says it couldn't comment.

Auburn University says it has suspended an assistant coach accused of taking a $50,000 bribe in exchange for steering a player into doing business with a certain financial adviser.

Chuck Person was arrested in Alabama on Tuesday in a case that involves corruption charges against 10 coaches, agents and sports marketing executives at several universities.

The university said in a statement that Person had been suspended without pay effective immediately.

Person was the associate head coach at Auburn. He played in the NBA for 13 seasons.

Adidas says it's unaware of any misconduct at its company in a college basketball bribe-paying scheme but will "fully cooperate with authorities."

The company issued a statement Tuesday after federal prosecutors announced that its director of global sports marketing is charged along with four college assistant coaches.

The head of New York's FBI office, William F. Sweeney Jr., says the probe is still active and investigators are conducting interviews "as we speak."

Federal investigators say a group of business advisers to athletes used thousands of dollars in Adidas money to make payments to top high school basketball players to get them to attend certain schools.

The acting U.S. attorney in Manhattan says the picture of college basketball painted by criminal charges his office brought against four college assistant coaches and an Adidas executive is not a pretty one.

Joon Kim made the comment at a news conference Tuesday after the charges were unsealed in Manhattan federal court. Assistant coaches at Arizona, Auburn, the University of Southern California and Oklahoma State were expected to appear in courts later Tuesday to face the charges.

Kim says the case against 10 men, including sports agents and marketing professionals, exposed "the dark underbelly of college basketball." He says the coaches exploited the "trust of the players they coached and recruited."

It was not immediately clear who will represent the coaches in court.

The director of global sports marketing for Adidas is among those charged in a bribe-paying scheme that federal authorities say was designed to match agents and advisers to players before they became NBA stars.

James Gatto was arrested Tuesday along with nine others, including four assistant basketball coaches from Arizona, Auburn, the University of Southern California and Oklahoma State. It was not immediately clear who will represent him in court.

In criminal complaints, authorities said agents and financial advisers paid bribes to assistant coaches to get them to introduce them to star college players and their parents before the students turned professional.

Authorities said the coaches received thousands of dollars in bribes, enabling the agents and others to get a slice of the millions of dollars the athletes could eventually make in the NBA.

Federal prosecutors have announced charges of fraud and corruption in college basketball, including against four coaches.

The coaches work at Oklahoma State, Auburn University, Arizona and the University of Southern California.

They were among 10 people charged in New York City federal court. Others included managers, financial advisers and representatives of a major international sportswear company. The details will be discussed at a news conference on Tuesday afternoon.

In court papers, prosecutors said the FBI has since 2015 been investigating the criminal influence of money on coaches and student-athletes who participate in intercollegiate basketball governed by the NCAA.