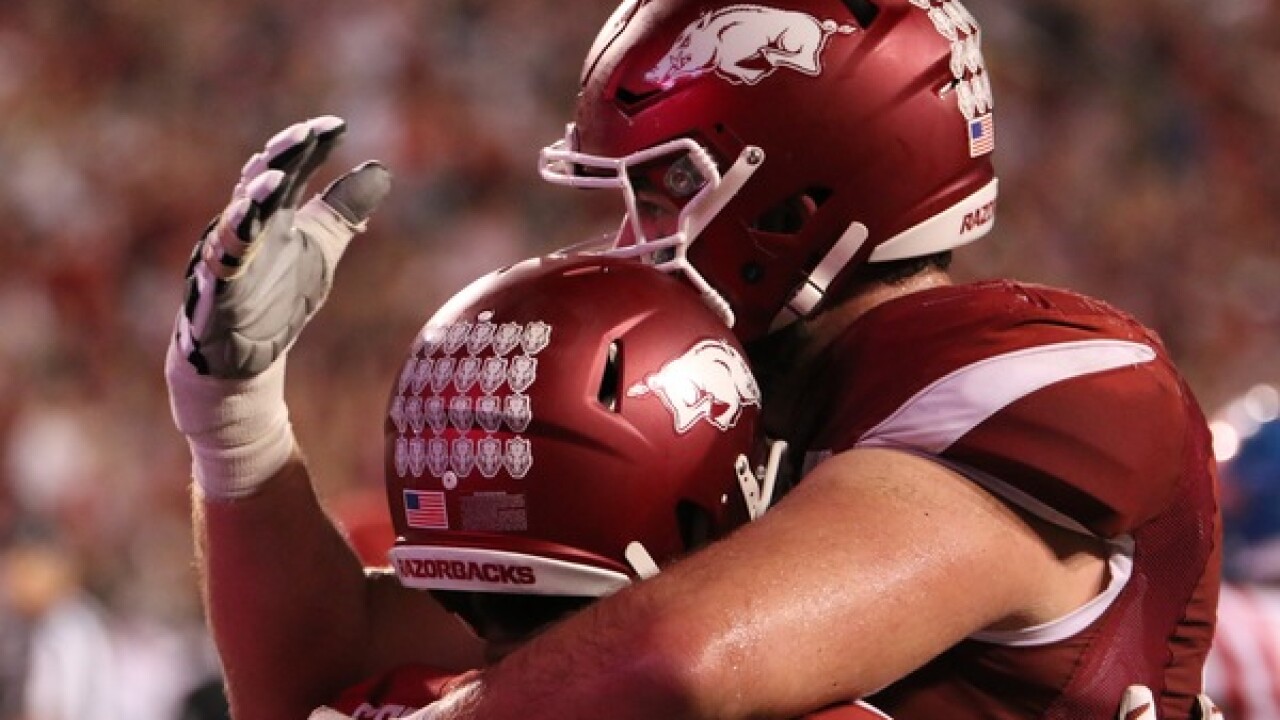 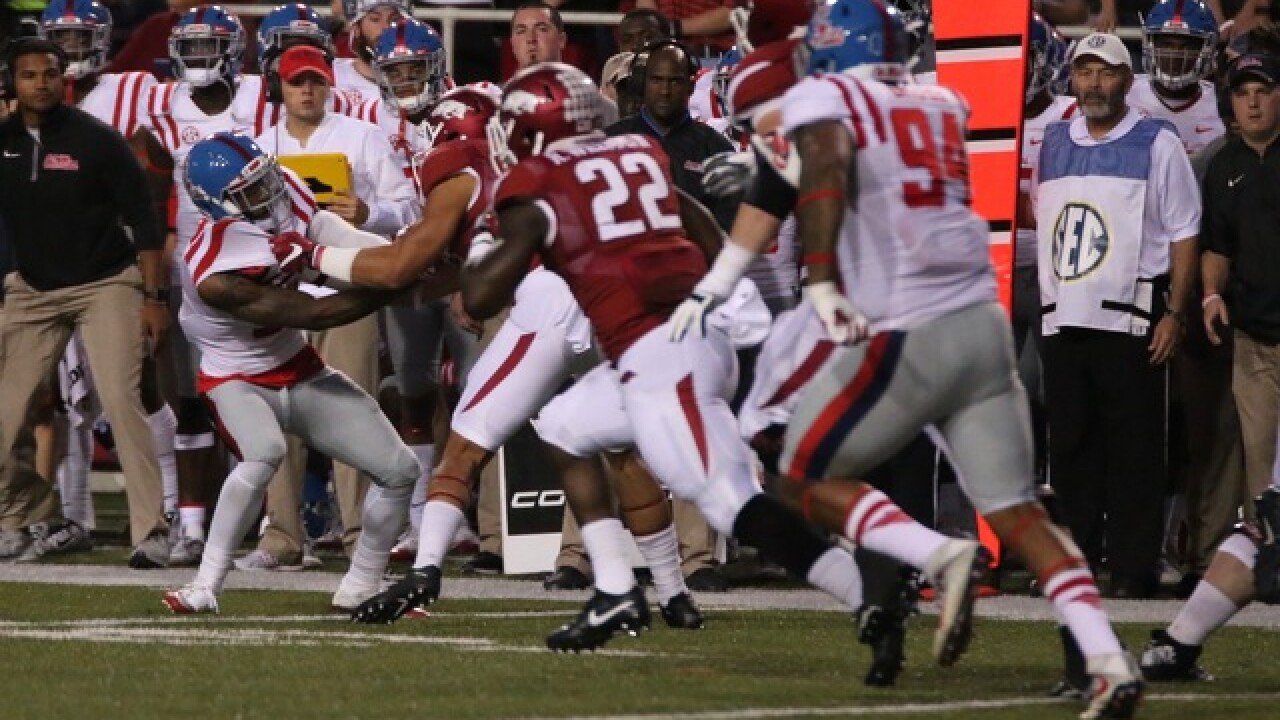 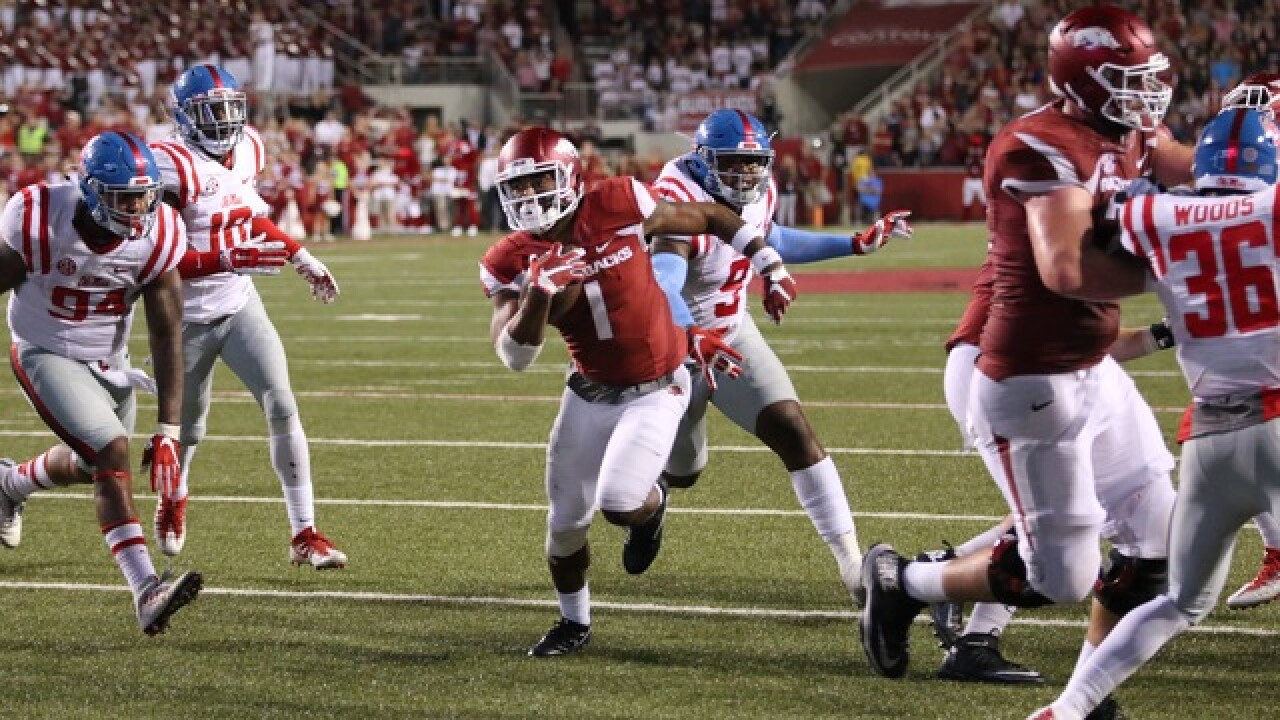 As the smoke cleared from the post-game fireworks at Donald W Reynolds Stadium Saturday night, it was all smiles for Coach Bielema as he congratulated his staff, received a giant hug from his wife, and then gave his postgame interview.  It should be smiles.  Austin Allen was trying his best to hide the grin during his interview.  Even Frank Ragnow, only two weeks removed from the news his father had passed was grinning as Coach Bielema caught him and embraced him on the field.  The talk all week was that this would be the week we learned who Arkansas is.  If that is the case, the Razorbacks are balanced, gritty, and only getting better.

It was expected that Ole Miss quarterback Chad Kelly would have his way with a much maligned Arkansas secondary and a linebacking crew that lost its leader last week.  They certainly came ready to prove that they can compete against the best, something that has been held over their head for a few seasons now.  Arkansas won every aspect of the game, including their matchup with the “land-shark” defense of Ole Miss.

In post game, Bielema spoke of Dwayne Eugene, the linebacker stepping in for the injured Dre Greenlaw, “I said this morning in the team meeting before we left for the hotel, 35 has earned this opportunity. I know Dre got injured. But 35 has earned for this opportunity by the way he prepared. You saw it out there today.”  The Razorback defense shut down the Ole Miss rushing attack and held Kelly in check most of the night.  With the game in the balance late, the defense got a sack, and then on the final meaningful play, forced a fumble out of bounds with a thundering hit on the scrambling Kelly.

The Arkansas offense executed it’s gameplan to near perfection, dominating the time of possession over 2 to 1, rushing for over 200 yards and passing for near 230.  Dominique Reed got behind the Rebel secondary early on a 51-yard strike from Allen, giving Arkansas a lead they would hold most of the game.  Allen would have three touchdown passes on the day and Rawleigh Williams III would rack up 180 yards on the ground to lead the Razorbacks.  With the game totals, Allen and Williams are now the SEC leaders for passing and rushing and are the only teammates from a power 5 conference to lead in both categories.  Williams would also be named the SEC player of the week, making Arkansas the only team to have two winners of the weekly award.

Aside from the game plan execution, two areas stood out as major factors in the upset win.  First is the resilience of the Razorback Nation.  In the press box for the pre-game meal, I was asked by a SEC official if I thought there would be any hangover from the loss to Alabama last week.  He seemed to imply he expected it.  My response, “Well, if there is one thing that defines a Bret Bielema coached team is how they respond to adversity.  They almost always come back stronger.”  That would hold true, not only for the team but for the entire fan base.

Donald W. Reynolds Razorback Stadium was rocking for its second consecutive prime time game.  The crowd would prove a factor, and if there was any question about the loyalty of the fan base, it was answered Saturday night.  Fifty-five times the volume peaked over 100 decibels and reached a crescendo at 117 as the Hogs forced the game-deciding fumble late.  Commentators would mention feeling the stadium move under them, coaches talk of not being able to hear on the headset, and most field level media, including myself, were using ear protection of some kind.

Special teams also appeared to be much improved, and Adam McFain was clutch, nailing two field goals and bringing consistency to the kicking game.  A key difference maker was the Crip Hall award winner given to the outstanding Senior during the Homecoming game.  All media on site vote, and Toby Baker would take home the honor.  Jokingly asking to not be called a kicker but a punter, Baker takes his job seriously and has been implemented into the game plan effectively.  He had two punts over 50 yards, including one for 54 into the wind when Arkansas needed the field position advantage late.  On a side note, my vote went to Keon Hatcher, who took a different role Saturday, not only drawing the strongest coverage but making two big time catches late on fourth down.  He would simply will his way to the ball and pull it down with authority.  Baker would have been my next choice.

Arkansas now turn to their first true conference road game and they travel to Auburn, Alabama to take on the Tigers.  Auburn is yet another ranked opponent, something familiar to the Razorbacks in Bielema era.  This will be Bielema’s 46th game as a Razorback and 23rd against a ranked opponent, by far the most in the nation over that time period.  Auburn is a favorite coming in, and had the bye week to prepare.  This may be the toughest game for the Razorbacks down the stretch, with LSU and Florida coming to Fayetteville.  Malzahn has deep Arkansas roots and no doubt wants to avenge his 4 OT loss from a year ago.  Arkansas has now faced the top offenses in the conference, and though Auburn has an effective rushing attack, it will be going against a talented and tested Arkansas defensive front.  Arkansas has already proven they can score and control the clock against the best, so look for this one to be a gritty battle of wills in the trenches, with both sides looking to control the ground game.