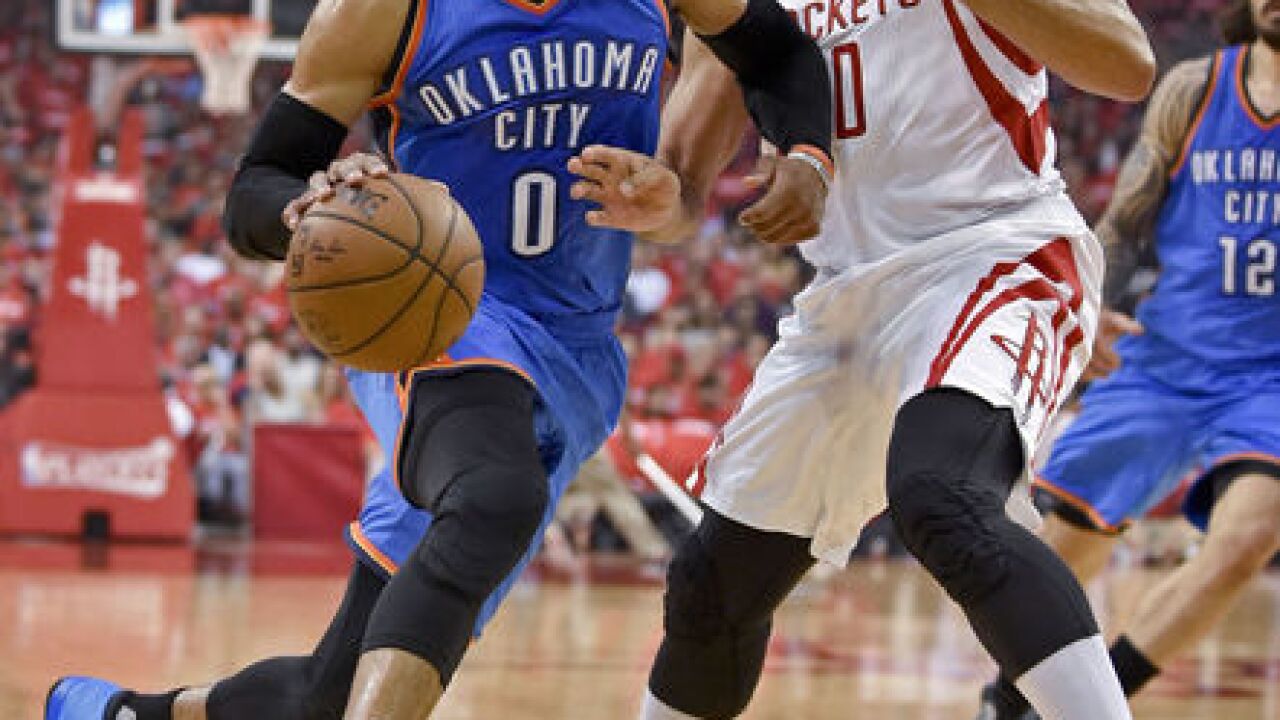 The Houston Rockets got a more modest performance from James Harden, but a collective scoring effort helped them rally for a 115-111 win over the Oklahoma City Thunder to take a 2-0 lead in the first-round Western Conference playoff series.

"It wasn't pretty," Harden said. "We didn't make a lot of shots. We gave them the early lead and we had to fight our way back and we did. We didn't give up. We continued to fight and grind and figure out a way to win."

Harden scored 35 points and the Rockets overcame 51 points from Westbrook in the highest-scoring triple-double in playoff history. Westbrook set a franchise playoff scoring record and added 13 assists and 10 rebounds. It was the sixth career playoff triple-double for Westbrook, who had an NBA-record 42 in the regular season.

But he shot just 4 for 18 in the fourth quarter and the Rockets clawed back from a double-digit deficit.

He was not in the mood to talk about his statistics after the game.

"I don't give a (expletive) about the line," he said before glaring at reporters. "We lost."

Thunder coach Billy Donovan thought Westbrook might have gotten tired late after playing the entire fourth quarter, but Westbrook brushed off that notion.

The game was tied before Houston scored 10 straight points with 3-pointers from Harden, Patrick Beverley and Eric Gordon to make it 114-104 with 1:22 remaining.

"Down the stretch you've just got to be ready," Gordon said. "James draws a lot of attention. So I was ready for that shot. It was great timing to knock down a shot like that."

Westbrook had four straight points to start a 7-1 run after that, but the Thunder wouldn't get any closer.

This was a much different game than the series opener, when Houston routed the Thunder 118-87. On Wednesday night, Houston trailed by as many as 15 and didn't take a lead until the fourth quarter.

The Rockets benefited from a balanced scoring attack, with Lou Williams adding 21, Gordon scoring 22 off the bench and Game 1 star Beverley chipping in 15.

Houston used a big run early in the fourth quarter to go on top for the first time in the game with about eight minutes remaining. Harden's 3 about three minutes later made it 104-100.

Andre Roberson added a tip-in layup for the Thunder before two free throws by Westbrook tied it at 104-all with about 3 minutes left.

The Thunder led by as many as 15 points in the first half, but Houston had cut the lead to 68-62 at halftime.

Thunder: Westbrook was just two rebounds shy of a triple-double by halftime with 22 points and 10 assists. ... Roberson was Oklahoma City's second-leading scorer with 12 points. ... Oklahoma City made just 7 of 30 3-pointers.

Rockets: Houston has won five in a row over Oklahoma City including regular-season games. ... Capela had 10 rebounds. .. Harden made 18 of 20 free throws.

WILLIAMS OFF THE BENCH

Thunder center Steve Adams on what went wrong late: "We just weren't taking the greatest of shots, and they really capitalized on that. It was a combination of things and our mental stamina needs to be a little better."

The series moves to Oklahoma City for Game 3 on Friday and Game 4 on Sunday.