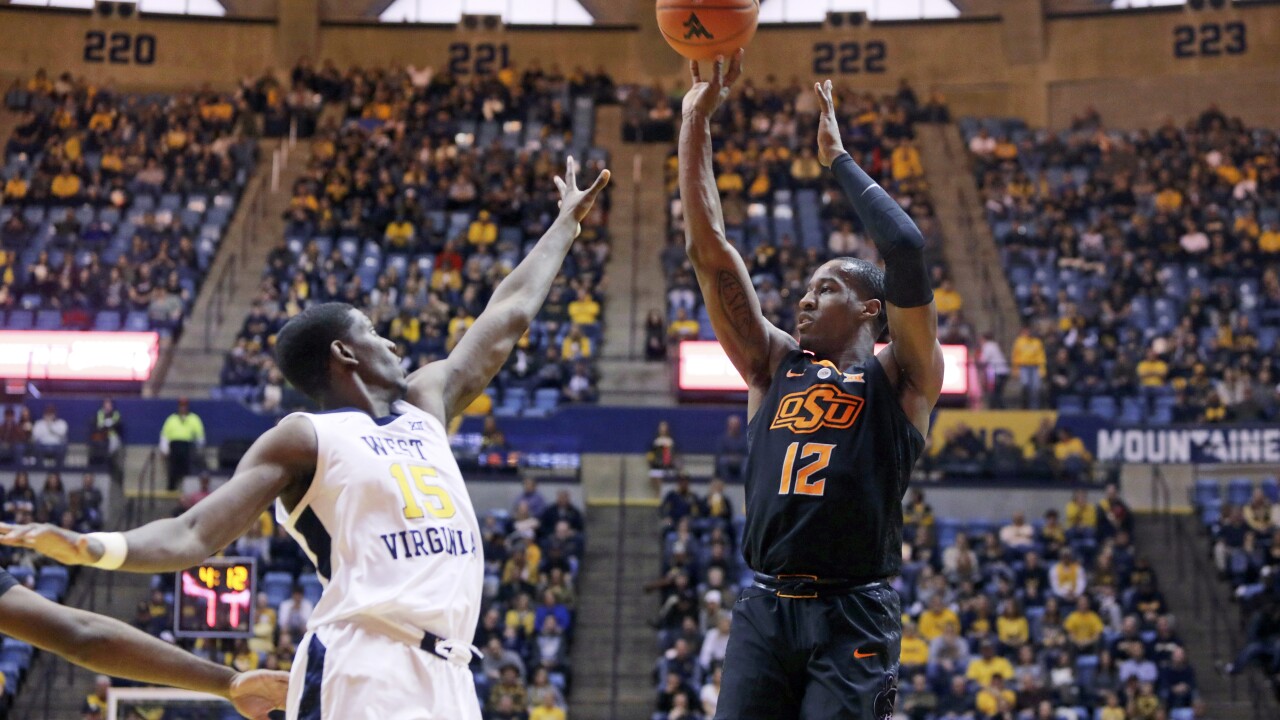 MORGANTOWN, W.Va. (AP) -- With an upcoming home stretch, it looks like Oklahoma State is getting hot at the right time.

Isaac Likekele had some fun, scoring a career-high 23 points with nine rebounds to lead the Cowboys to its first true road win, beating West Virginia 85-77 on Saturday.

"I was definitely having fun. I was just trying to remain focused on the game plan and remain aggressive," Likekele said. "Most importantly, it was fun because I feel like everybody believed and everybody wanted to come in here and win. We were just so determined."

After an ugly, back-and-forth first 15 minutes, the Cowboys (8-8, 2-2 Big 12) had a one-point lead before Cameron McGriff led a quick 11-2 run with five straight points to stretch the margin to 10 with two minutes left. The Cowboys led 39-28 at halftime.

Lamont West and James "Beetle" Bolden gave the Mountaineers (8-8, 0-4) a spark out of the break to cut the Cowboy lead to three with a little over 10 minutes to play.

Likekele then led Oklahoma State on a 12-4 run with nine points to put the Cowboys up by double digits. West Virginia would not recover.

"Obviously, we're elated to be able to come on the road anytime in our league, and be able to leave feeling good about the way you played and validating that with a win," Oklahoma State head coach Mike Boynton said. "And our team is growing. Obviously, West Virginia's personnel is still trying to figure themselves out, but I've got no doubt that (WVU head coach Bob) Huggins, with his pedigree and experience, will get it done soon, and they'll continue to be a tough out in our league moving forward."

McGriff finished with his fifth double-double of the season with 16 points and 10 rebounds. Curtis Jones came off the bench to score 15.

"We have to be all on the same page and we all have to be working for the same goal," Huggins said.

The loss gives the Mountaineers their first 0-4 start in conference play since the 1995-96 season, when they lost to Georgetown, Connecticut, Pittsburgh and St. John's to start their inaugural Big East season.

WVU remains the sole winless team in the Big 12.

Oklahoma State: After struggling during the holidays with losses to Minnesota, Tulsa, Houston and Nebraska, the Pokes are jelling at the right time with their second straight win. The red-hot Cowboys will host Baylor, Iowa State, Oklahoma, South Carolina and Kansas State over the next couple weeks.

West Virginia: The Mountaineers have struggled to find an offensive identity over the first half of their season and with games against TCU, Kansas and Tennessee in the next few weeks, the search for their ninth win may be a long one.

Regular Mountaineer starters Wesley Harris and Esa Ahamd did not see any playing time for West Virginia. Sagaba Konate also sat out his seventh straight game with a knee injury.

"All of those guys are like my kids just like all of the guys I've had in the past," Huggins said about not playing Harris and Ahmad. "As a parent sometimes, you want more for your children than they want for themselves and that's a very frustrating situation to be in."

Konate, Harris and Ahmad account for 37 percent of WVU's scoring and 35 percent of their rebounding this season.

West Virginia had their best free-throw shooting game this season with 19 of 24 (79.2 percent), beating their previous best of 78.9 percent in their 63-57 loss to Western Kentucky on Nov. 17.

HOME AWAY FROM HOME

The Cowboys have made light work of the Mountaineers in Morgantown, beating them each of the last three seasons. They are the only team in the Big 12 to do so.

"I think our guys do come in (to Morgantown) and feel good that they're prepared, and they feel good because they've had some success," Boynton said. "However, you've still got to go out there and try to find a way to take care of your basketball."

The Cowboys are 5-2 all-time against WVU on the road and are 6-4 all-time in games played in the state of West Virginia.

Oklahoma State: Returns to Stillwater to begin their five-game homestretch against Baylor on Monday.

West Virginia: Continues the search for their first conference win at TCU on Tuesday.