Cowboys Play for Injured Tylan Wallace in Win Against TCU 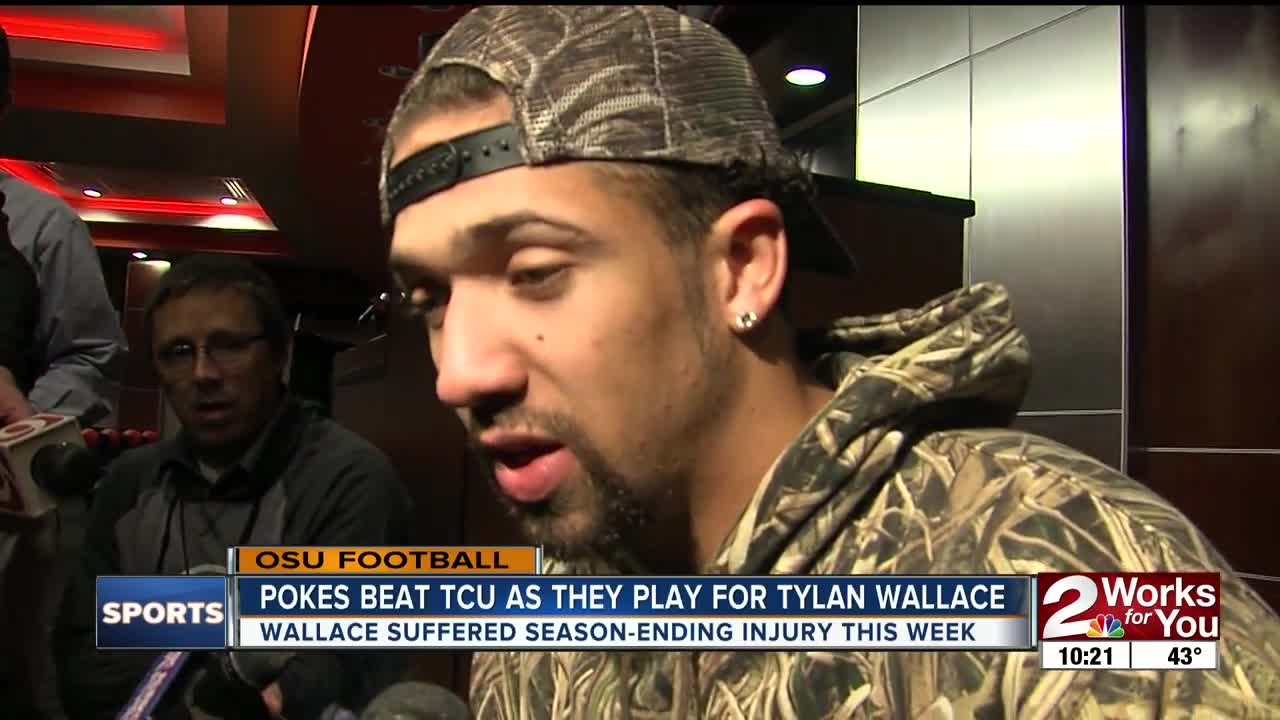 Hear from Spencer Sanders and Chuba Hubbard as they talk about the Cowboys' win vs TCU.

STILLWATER, Okla. (AP) — TCU’s Gary Patterson has long been known as one of the best defensive coaches in college football — especially against the run.

Hubbard rambled for 192 yards in the second half. A TCU spokesman said Hubbard became the first player to rush for at least 200 yards against TCU in Patterson’s 19-year run as head coach.

“When Chuba gets through there, nobody can catch him,” Oklahoma State coach Mike Gundy said. “That makes him different than other players.”

Spencer Sanders passed for 158 yards and ran for 88 and Dillon Stoner caught three passes for 93 yards and two touchdowns for the Cowboys (6-3, 3-3 Big 12), who became become bowl eligible for 14th straight year.

Oklahoma State played without star receiver Tylan Wallace, who reportedly tore an ACL during the week. Gundy said Wallace, a Biletnikoff Award finalist last season, is out for the season.

“It’s just hard for a coach to swallow,” Gundy said. “It just almost ruined my week when I left the office, when I went home. When I go home, it just makes me sick to where I can hardly function. It’s hard to lose a guy like that, not only as a player, but also as a person, what he brings to the table.”

Stoner caught touchdown passes of 57 and 22 yards in the first half to help Oklahoma State take a 17-3 lead. Duggan ran for a touchdown and threw for another to help TCU make it a 17-all game at halftime.

Hubbard broke loose for a 92-yard touchdown run in the third quarter. The fourth-longest run in Oklahoma State history gave the Cowboys take a 24-17 lead.

“I just saw the hole and hit it,” Hubbard said. “The offensive line did a great job, we had a great offensive scheme, everyone on offense and defense played their butts off and it all just came together.”

Hubbard took off for a 62-yard score in the fourth quarter to give the Cowboys a 31-17 edge.

TCU’s Jonathan Song made a field goal in the final minute, but Oklahoma State recovered the onside kick and ran out the clock.

“The times we do the things we need to do football-wise, we can win football games,” Patterson said. “Still, as bad as we played, it was a seven-point ballgame on the road. A seven-point ballgame on the road as bad as we played. So when we can play well and figure it out, we can beat anyone, and when we don’t, we aren’t going to.”

TCU: The Horned Frogs entered the day having allowed just 103.7 yards rushing per game but surrendered 307 on Saturday.

Oklahoma State: The Cowboys learned they could beat a solid team without Wallace and still run the ball well when everyone expected it to go to Hubbard. They also might have found a new go-to receiver in Stoner.

With three regular-season games a bowl game remaining, Hubbard already has 1,604 yards rushing, the eighth-best single season in Oklahoma State history. The only players in school history ever to rush for more yards in a season are Barry Sanders, Terry Miller, Ernest Anderson, Thurman Thomas and Gerald Hudson.