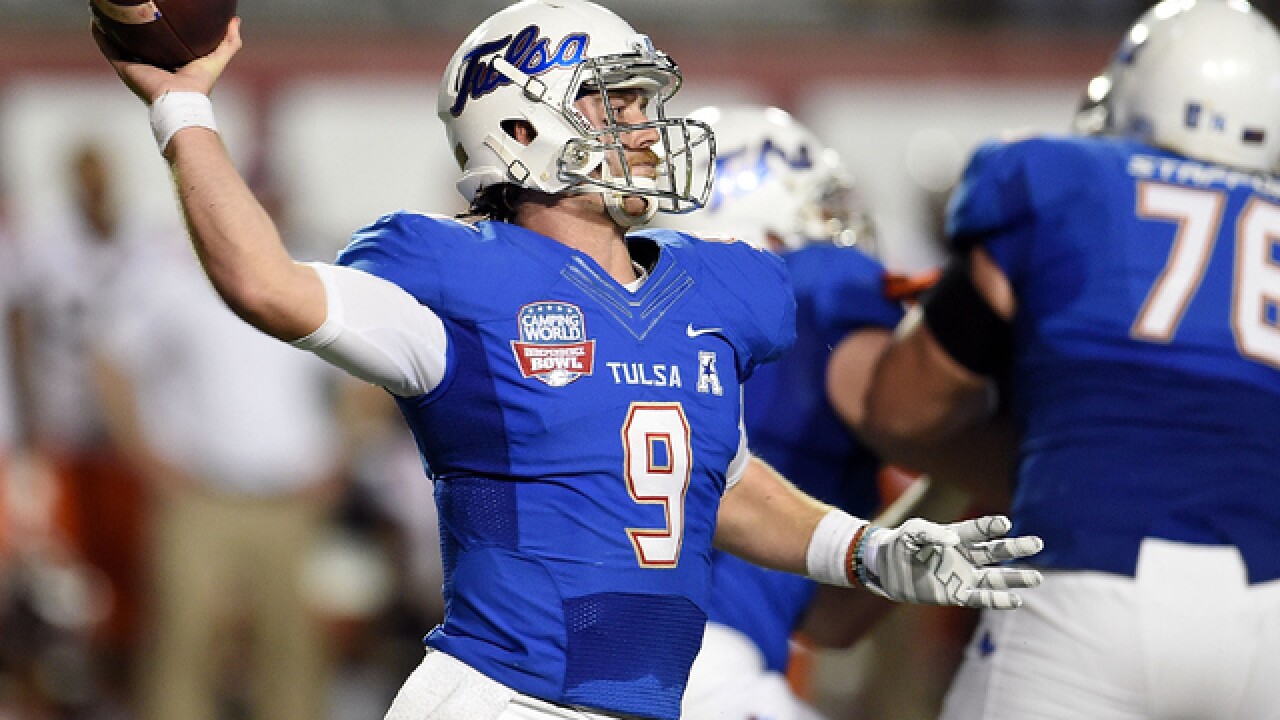 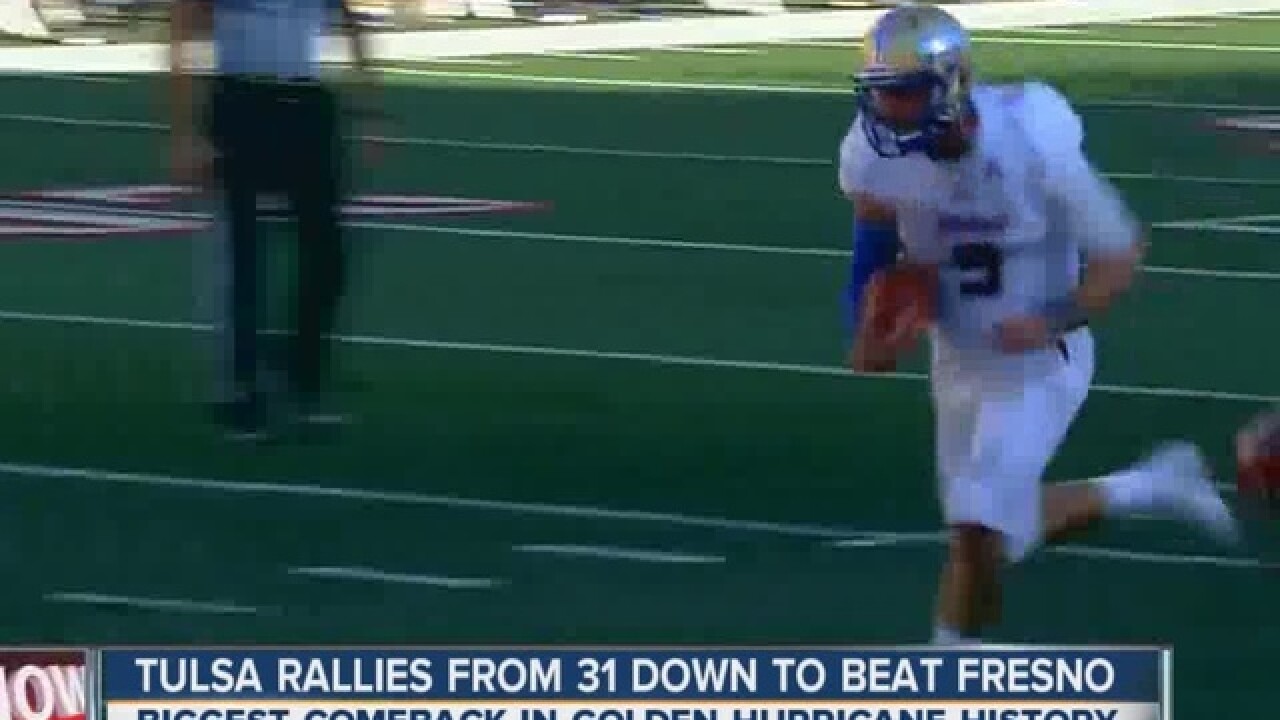 Fresno, Calif. –– Tulsa overcame a 31-0 second quarter deficit to defeat Fresno State, 48-41, in double overtime Saturday afternoon in front of a crowd of 23,273 at Bulldog Stadium. It was the biggest come-from-behind victory in Tulsa football history, surpassing a 20-point comeback in a 24-23 win over Oklahoma State in the 1995 season.

Senior quarterback Dane Evans scampered 18 yards for the winning touchdown on Tulsa’s possession in the second overtime. The defense held to preserve the victory, as the Golden Hurricane moved to 3-1 on the season.

Tulsa trailed 31-0 with 10 minutes to play in the second quarter, before embarking on three straight scoring drives to cut the deficit to 31-21 at the half. Fresno State (1-3) extended the lead to 34-21 with a field goal in the third quarter, but the Hurricane scored 17 unanswered points to take a 38-34 lead.

Tulsa amassed 617 yards of total offense, including 344 rushing yards and 273 yards through the air. D’Angelo Brewer’s 252 rushing yards were the most since Tarrion Adams’ 323 yards in 2008 against Tulane, while fellow running back James Flanders had his second career 100-yard rushing game with 101 yards.

Evans completed 22-of-32 passes for 273 yards and four TDs, while hitting Josh Atkinson seven times for 107 yards and one TD. Keevan Lucas had six receptions for 103 yards and two TDs, all coming in the first half.

Fresno State had 453 yards of total offense with 276 passing yards and 177 yards on the ground.

“What a game! We spot then 31 points, and come back and win in overtime. There was never quit in this team, and we had enough left in the tank to finish it off,” said Tulsa Head Coach Philip Montgomery. “At halftime, we felt like we were in a good spot, only down by 10 points. The game was there for us to take.”

Fresno State opened the second half with a 25-yard field goal, after driving 67 yards in 15 plays to take a 34-21 lead over the Hurricane. Tulsa had the next two scores to take its first lead of the game, 35-34, at the 13:38 mark of the fourth quarter. Evans hit Atkinson on a 24-yard pass at the 4:59 mark of the third period, and Flanders ran in from two yards out.

The Hurricane took its next possession 62 yards in 11 plays, and had to settle for a 37-yard Jones field goal that gave Tulsa a four-point lead at 38-34.

Before 11 minutes ticked off the clock, Fresno State had taken a 21-0 lead, while the Tulsa offense was stuffed on its first three possessions with -3 total yards.

After Tulsa started on the game’s first possession 3-and-out, Fresno State scored on their first play, going 44 yards on a run by Jamire Jordan. Following a Tulsa turnover, the Bulldogs took a 14-0 lead when quarterback Chason Virgil capped a 23-ayrd, four-play drive by running 14 yards for the touchdown at the 9:47 mark. Fresno State went ahead 21-0 when Dontel James ran the final yard on a 69-yard, 11-play drive with 4:01 left on the first quarter clock.

At the end of the first quarter, Fresno State had a 21-0 lead while out-gaining the Hurricane 125 to 37 in the first 15 minutes. The Bulldogs three scoring drives totaled 16 plays and 136 yards.

Fresno State added to its lead on its first second quarter possession when the Bulldogs knocked through a 25-yard field for a 24-0 lead, capping a 62-yard, nine-play drive.

A 65-yard pass play put the Bulldogs ahead 31-0 at the 10:16 mark of the third period, as the pass from Chison to Jordan on the first play from scrimmage.

“We weren’t ready to play in the first quarter, and then we performed lights out over the final eight minutes of the second quarter and through the second half. There was no momentum, no emotion on the sidelines in those first 15 minutes, and that’s not us,” added Montgomery.

Tulsa put its first meaningful drive together, going 68 yards on six plays for its first points, cutting the deficit to 24 points, 31-7, at the 8:52 mark. Evans connected the final 23 yards in the corner of the end zone to Justin Hobbs for the score.

The Hurricane offense again responded on its next possession, going 71 yards on seven plays as Evans threw 40 yards to Lucas for the score and after the PAT, cut the deficit to 31-14 with 6:48 remaining in the second quarter. Another 40-yard touchdown pass from Evans to Lucas on Tulsa’s next possession brought the Hurricane to within 10 points, 31-21. It was Tulsa’s third straight drive that resulted in a touchdown, this time traveling 60 yards in three plays.

Tulsa scored its three first-half touchdowns within a span of less than four minutes, as the drives took 1:04, 1:07 and 1:35 off the game clock.

After a dismal first quarter that saw Tulsa gain just 37 yards, the Hurricane offense put up 247 second-quarter yards and had a 284 to 277-yard edge at halftime. At the half, Brewer had131 rushing yards on22 carries, while Lucas had 103 yards and two TDs on six receptions and Evans completed 11-of-17 passes for 151 yards and three touchdowns.

The Golden Hurricane will have an open week next Saturday before beginning American Athletic Conference play at home against the SMU Mustangs on Friday night, October 1, from H.A. Chapman Stadium.