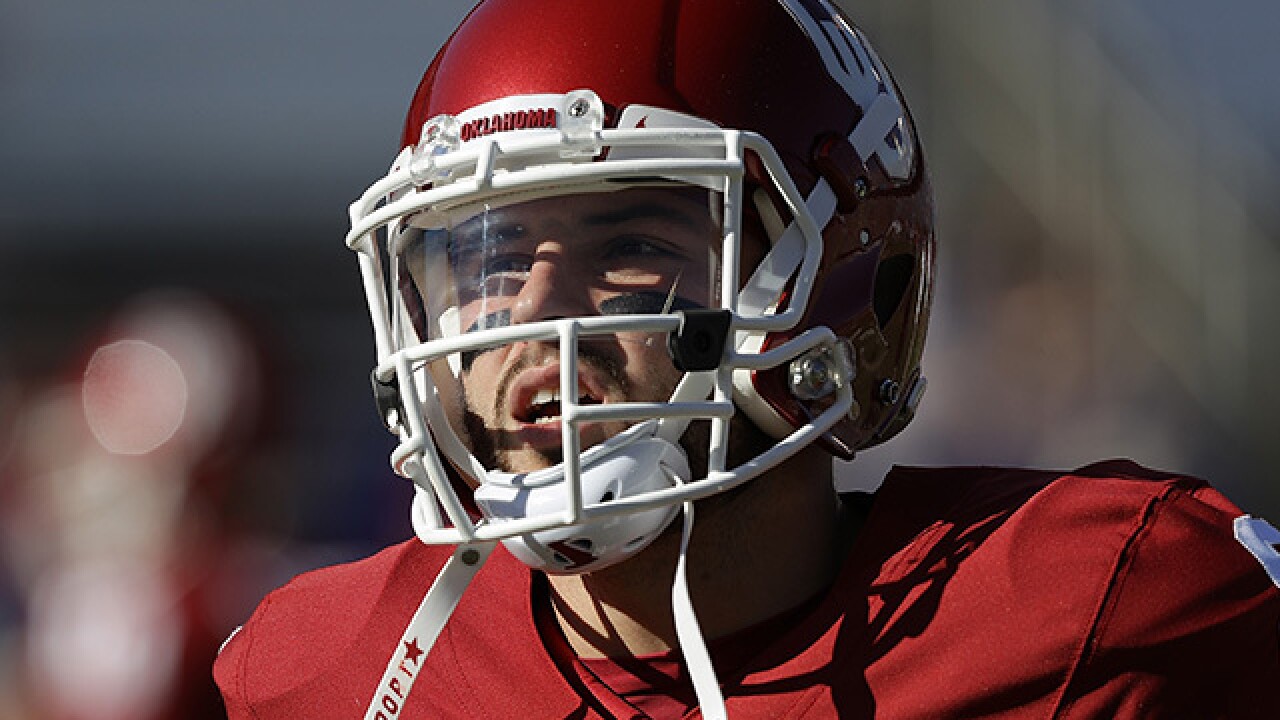 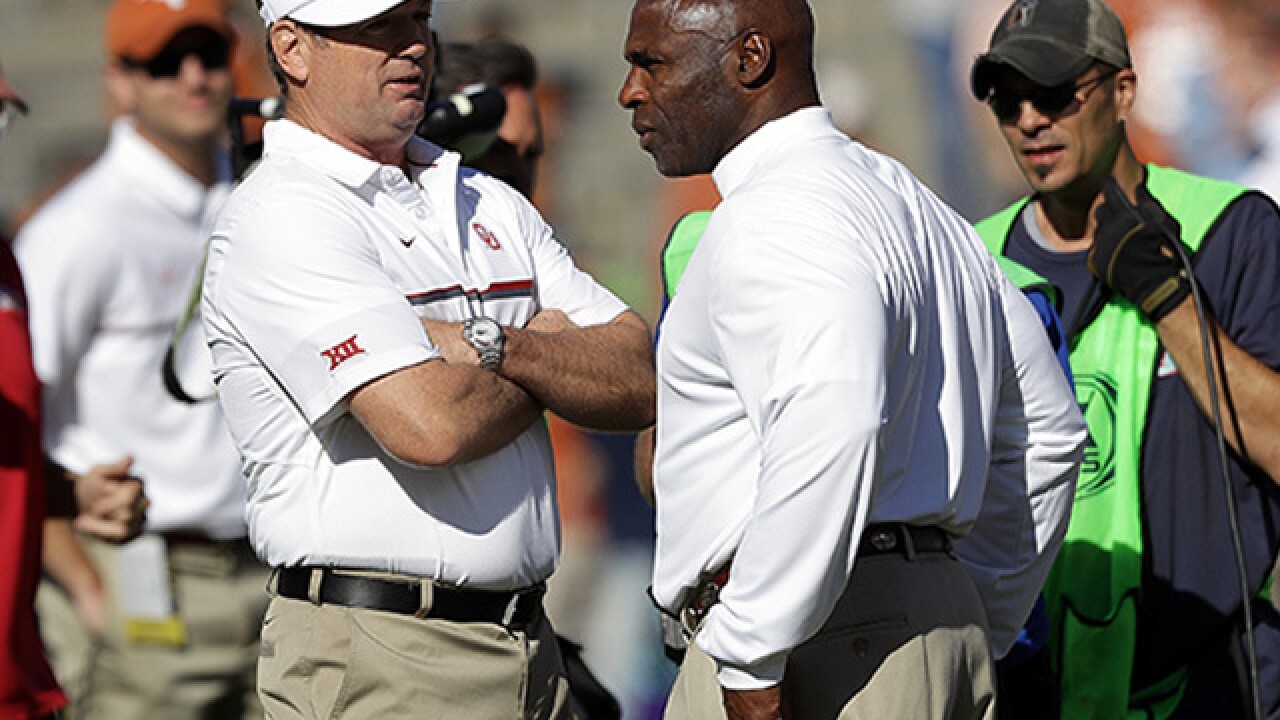 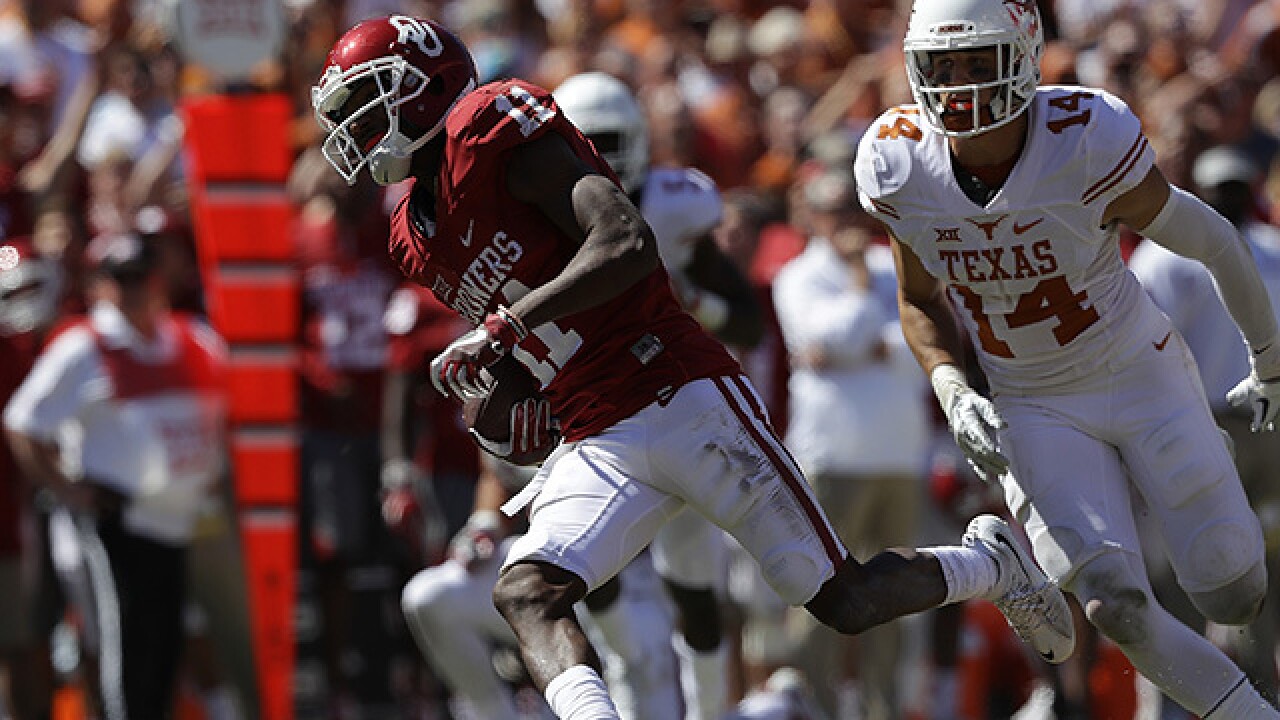 AP - Oklahoma, which still has slim hopes of cracking the four-team College Football Playoff, will try for its 14th straight Big 12 Conference win when it hosts Baylor on Saturday afternoon.

The 11th-ranked Sooners (7-2, 6-0 Big 12) were pretty much written out of the national championship picture when they lost two of their first three games to Houston (33-23) and Ohio State (45-24). But Oklahoma has won six in a row since that home loss to the Buckeyes and knows a strong finish with victories over the Bears, West Virginia and Bedlam rival Oklahoma State could put it back into contention for a CFP berth.

"I guess maybe the finish last year (is) really positive," Oklahoma coach Bob Stoops said. "But we're a new team. I know they'll have the confidence to do it regardless. But we've got to focus on not last year, (but) the work we have to do to be our best this week and keep moving forward from it. So that's all we'll talk about and look to do."

The loss to the Horned Frogs was particularly disconcerting for Baylor fans. The Bears fell behind 38-14 at halftime and allowed 688 yards in total offense, including 431 yards rushing. If that wasn't ugly enough, running back Shock Linwood, who became Baylor's career rushing leader earlier this year, got into an altercation with a graduate assistant on the sidelines during the loss and has been suspended for Saturday's contest by acting head coach Jim Grobe.

"I think there are some attitude issues right now," Grobe said. "It's not anything major. He's just not been himself. He's not really been as focused as I think he needs to be, and he's in a tough situation."

Linwood, who has rotated with Terence Williams and JaMycal Hasty for the lead running back role, has rushed for 594 yards through eight games this season to give him 4,056 yards in four seasons. He had just 29 yards on six carries in the TCU loss.

Oklahoma, which turned to fullback Dimitri Flowers (233 all-purpose yards) in its 34-24 win at Iowa State last Thursday, is expected to have its two top running backs back for this one. Joe Mixon (813 yards, 5 TDs) is expected back after a one-game suspension against Iowa State for reportedly tearing up a parking ticket and throwing it at an attendant, while Samaje Perine (475 yards, 6 TDs), who has missed the past three games after pulling a muscle against Kansas State, will practice this week and will play if all goes well. That's bad news for a Baylor defense that is allowing an average of 344 yards rushing over the last two games.

Oklahoma quarterback Baker Mayfield continued his hot streak last week against Iowa State and the Sooners' passing offense is eighth nationally with an average 342.3 yards per game. A lot of that was produced by wide receiver Dede Westbrook, who has been on a tear (1,012 yards and 12 touchdowns) during conference play.

Baylor averages a Big 12-best 278.4 yards rushing per game and will be going against an Oklahoma defense that allows just 123.6 yards per game on the ground, which ranks 25th in the country. The Sooners have generally struggled to defend mobile quarterbacks, and the Bears' Seth Russell has rushed for 436 yards and eight touchdowns so far this season.

Russell hasn't been the prolific passer Baylor fans were hoping to see this season, completing just 55.5 percent of his passes for 1,978 yards, 19 touchdowns and six interceptions. But the Bears do have a pair of dangerous receivers in KD Cannon and Ishmael Zamora.

Zamora has 393 yards receiving and five touchdowns in five games after missing the first three games due to suspension, while Cannon has 40 receptions for 560 yards and six touchdowns. They'll be going up against an Oklahoma defense that ranks just 122nd nationally in passing yards allowed per game (297.7).