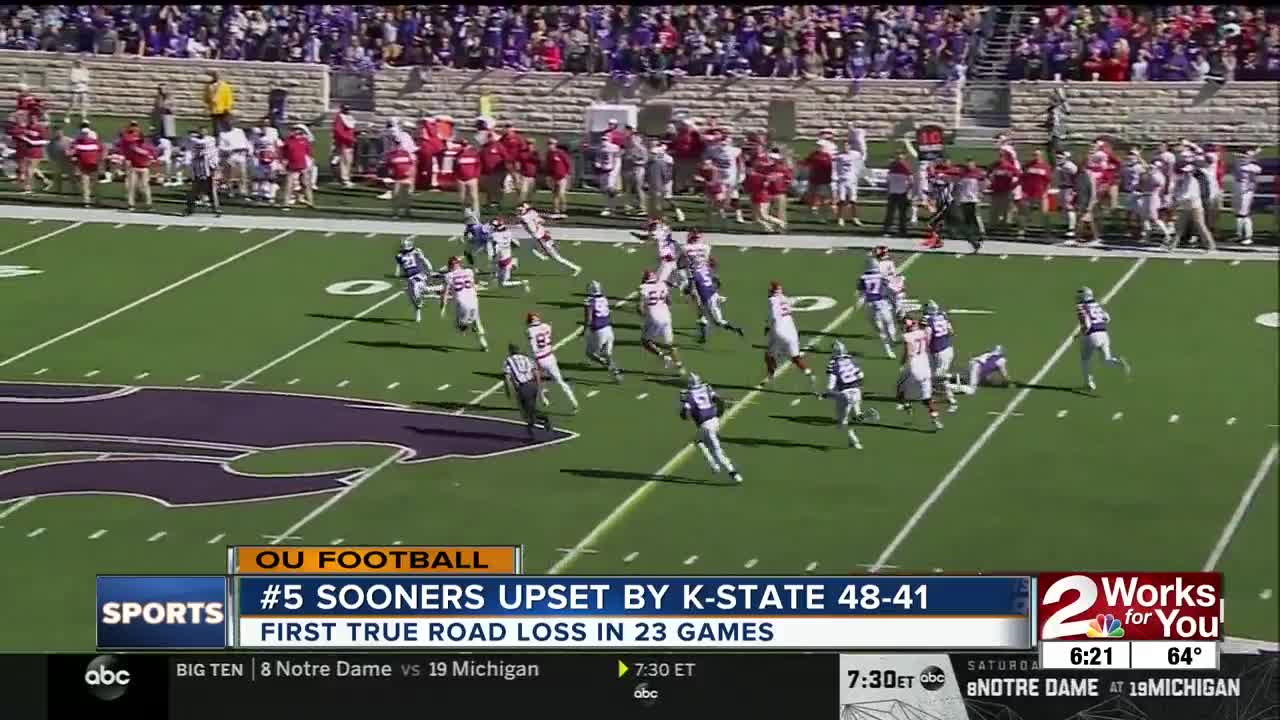 #5 Oklahoma takes their first loss of the season as Kansas State pulls off the upset, 48-41.

MANHATTAN, Kan. (AP) — There was never a moment of uncertainty on Kansas State’s sideline when fifth-ranked Oklahoma raced to an early lead, or when the wounded Sooners began to mount a frantic fourth-quarter comeback.

There might have been just a bit when they recovered an onside kick.

Officials reviewed the recovery with 1:45 left in the game and determined the ball hit an Oklahoma player a yard early, giving it to the Wildcats. They ran out the rest of the clock to finish off a 48-41 victory that dealt the Sooners’ national title hopes a major blow.

“Oklahoma isn’t a team that is used to facing adversity very well,” said Hubert, who along with the rest of the Kansas State defense did just enough to hold Heisman Trophy contender Jalen Hurts in check.

“If you can put their backs against the wall,” he said, “things are going to go more smoothly.”

Oklahoma (7-1, 4-1 Big 12) tried to make the case that its player was blocked into the ball on the onside kick. But by the time the Sooners headed for the bus, the scoreboards inside Bill Snyder Family Stadium still read the same.

“We had a similar situation at Baylor my first year. They engaged our player and it definitely hit him before the 10-yard,” Sooners coach Lincoln Riley said, “but I was under the impression if they engage our player into it that there’s no illegal touching. It was a 50-50 call that didn’t go our way.”

It was the first home win for the Wildcats (5-2, 2-2) over Oklahoma since 1996, and just their fourth win ever over a top-five team. It also snapped the Sooners’ nation-leading 22-game road win streak — a span of five years and 22 days since their loss at TCU.

Skylar Thompson had 213 yards passing while running for four touchdowns, and James Gilbert added 105 yards rushing and a score.

“I don’t have any idea on the lines and spreads, thank God,” said Wildcats coach Chris Klieman, whose team was a 21-½-point underdog. “I mean, yeah, it was a statement win for our guys. I told the seniors, ‘How many more opportunities are you going to have to play in front of your home crowd?’”

It was the third consecutive week a top-10 team lost to an unranked foe, with Oklahoma joining Georgia and Wisconsin.

Hurts threw for 395 yards and a touchdown while running for 95 yards and three more. But despite his big game, the Sooners couldn’t overcome a multitude of mistakes: two turnovers, costly penalties and the ejection of one of their defensive leaders.

Last week, it was the Sooner Schooner that crashed.

This week, it may have been Oklahoma’s chances of reaching the College Football Playoff.

It didn’t look that way early, though. The Sooners breezed downfield for a field goal, forced a quick punt, then scored again in a matter of minutes to take a 10-0 lead. And after Kansas State scored, Hurts answered with another touchdown to give the Sooners a 17-7 lead.

That’s when the unraveling began.

In the first half alone, Oklahoma twice fumbled the ball or dropped a snap. Penalties on third-and-long on each of the Wildcats’ first two scoring drives gave them first downs. The most egregious error came on a wide receiver pass in the final minute, when Nick Basquine’s throw bounced off Charleston Rambo and into the hands of A.J. Parker to set up the Wildcats’ third touchdown of the first half.

“That was a huge play,” Parker said.

That deficit swelled during the third quarter.

Kansas State marched for a field goal to open the half. Then, after a pooch kick, Eric Gallon forced a fumble on the return — and sustained a severe knee injury requiring a cart to take him from the field — that the Wildcats recovered to set up another touchdown run.

When they forced a three-and-out and scored again, they had built a 41-23 lead.

Oklahoma tried to rally in the fourth quarter, getting a 70-yard score from CeeDee Lamb, rolling downfield for Hurts’ third TD run and a 2-point conversion, then getting a field goal from Gabe Brkic to draw within one possession with 1:45 to go.

Then came the onside kick, the review — and the celebration in Aggieville.

“The guys just continued to believe throughout the game,” Klieman said. “I saw a sideline full of guys who really felt they had a chance to win this football game.”

Oklahoma: The Sooners could still reach the playoffs by winning out and getting some help, but the task become much more challenging. And the road doesn’t get any easier with games against No. 23 Iowa State and No. 14 Baylor.

Kansas State: The Wildcats have won back-to-back Big 12 games after dropping their first two, and they gave Klieman a signature win as he tries to build on longtime coach Bill Snyder’s success.

Oklahoma cornerback Parnell Motley was ejected early in the second quarter when he kicked Kansas State tight end Logan Long along the Sooners’ sideline. It came after Youngblood’s touchdown run trimmed the Wildcats’ deficit to 17-14 and occurred right in front of an official.

Oklahoma gets a week off before facing Iowa State on Nov. 9.

Kansas State heads down I-70 to face Kansas next Saturday.