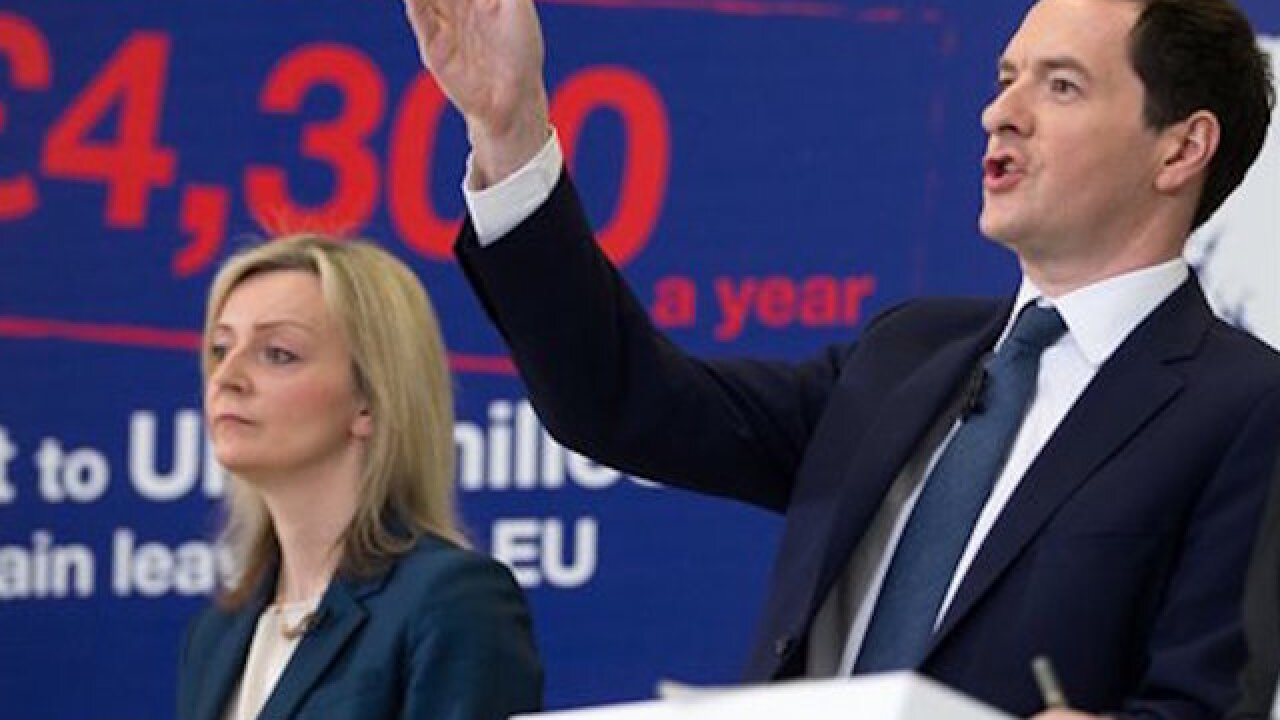 Matt Cardy/PA via AP
Matt Cardy
<p>Chancellor of the Exchequer George Osborne, right, during his speech next to Environment Secretary Liz Truss at the National Composites Centre at the Bristol and Bath Science Park in Bristol, England, Monday, April 18, 2016. Osborne has put a price tag on leaving the European Union, costing Britain the equivalent of $6,100 per household. The estimate is based on a 200-page analysis of the long-term costs and benefits of EU membership and its alternatives that George Osborne published Monday April 18, 2016 ahead of the June 23 referendum. (Matt Cardy/PA via AP) </p>

LONDON (AP) — Britain's Treasury chief has put a price tag on it: Leaving the European Union would cost Britain the equivalent of $6,100 per household.

The estimate is based on a 200-page analysis of the long-term costs and benefits of EU membership and its alternatives that George Osborne published Monday ahead of the June 23 referendum.

The U.K. economy would be 6 percent smaller in 2030 than currently forecast if the country were to leave the EU and replace it with a trade agreement similar to the one Canada is currently negotiating, according to the Treasury's analysis. Opponents rejected the estimate as absurd.

"The conclusions could not be clearer," Osborne told the BBC before the release. "Britain would be permanently poorer if we left the European Union, to the tune of 4,300 pounds ($6,100) for every household in the country. That's a fact everyone should think about as they consider how to vote, and as chancellor, I'm clear we're stronger, safer and better off in the European Union."

Osborne said the analysis looked at the benefits the U.K. receives from being inside the EU. It also considered alternatives that range from relying only on World Trade Organization rules, like Russia and China, to negotiating a Norway-style agreement in which Britain would gain access to the single market but be required to pay into the EU budget and accept the free movement of people. The Canadian option represents the middle ground, Osborne said.

"What I would reject, however, is the idea that Britain can sign up to some kind of deal where we get all the benefits of European Union membership but none of the obligations or costs," he said. "The Germans or French wouldn't give that to us because it's a better deal than Germany or France gets and it's not credible."

The analysis concludes that tax receipts would face a 36 billion pound black hole.

"This is more than a third of the (National Health Service) budget and equivalent to 8 (pence) on the basic rate of income tax," the analysis said.

It also estimated that 3.3 million jobs are linked to exports from the U.K. to other EU countries.

Osborne also rejected the idea that the analysis was merely campaign propaganda dressed up as fact, but supporters of the leave campaign argued that the warnings were an attempt to confuse the British public.

Writing in his column for the Daily Telegraph, the leading figure in the "out" campaign, London Mayor Boris Johnson, argued that the public was being asked to "accept the accelerating loss of democratic self-government as the price of economic prosperity."

Even so, he said the public sees "the emperor has no clothes and that Britain could have a glorious future outside the EU." The migrant crisis shows the dangers of remaining in the bloc, Johnson said.

"They all know that there is one event in the next few weeks that could remind the British people of at least one salient point in this debate — that this country has lost control of its frontiers — and that is another migration crisis on the borders of the EU, and within the EU itself," he wrote.