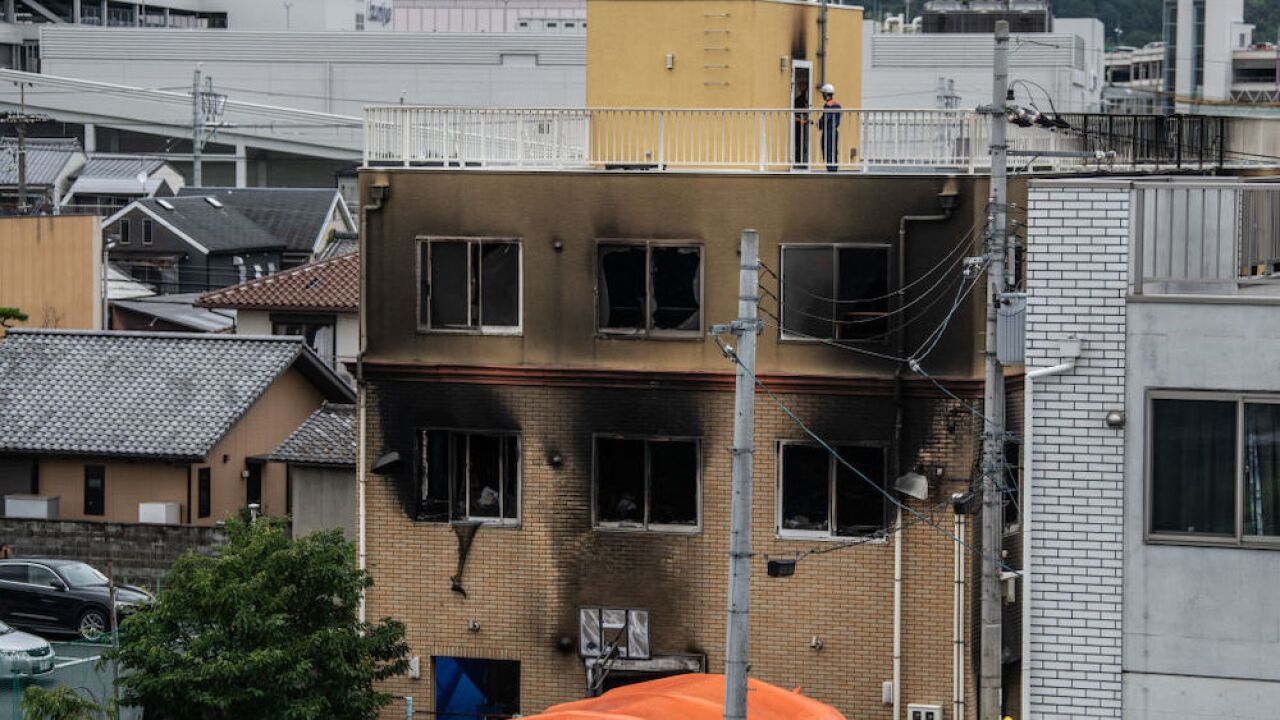 The suspect at the center of Japan's worst mass killing in almost 20 years told police that his work was plagiarized and that he used gasoline to torch the renowned Kyoto Animation studio , killing 33 people.

Police identified the suspect as 41-year-old Shinji Aoba during a press conference on Friday and said he has unspecified mental health issues.

Kyoto Fushimi Police spokesperson Ryoji Nishiyama said they were not yet aware of a link between the suspect and the studio in Kyoto's Fushimi-ku district.

The suspected arson attack on Thursday has left anime fans world-over grieving the loss of life and a studio, which claimed to put its employees first and was a major force in the industry.

Twelve men, 20 women and another individual whose gender was unknown died in the blaze and 35 were injured. All of those who died were employees.

As they apprehended the suspect, police said the man spoke about his work being plagiarized but cautioned that they need to wait until the suspect is formally interviewed before confirming a motive.

Officers have so far been unable to question the man, who remains sedated in hospital owing to the severe burns he sustained during the attack.

Grim details started to emerge from the scene on Friday as police began their inspection of the site.

After dousing flames, firefighters entered the building and found 20 bodies lying on the staircase leading to the roof exit. Another team found 11 bodies on the second floor of the building and two on the ground floor.

Police said that 74 people were inside the building at the time of the blaze.

The fire spread so rapidly that many inside did not have time to escape, Kyoto Prefectural police told CNN. Several people jumped out of the second and third floor windows and suffered bone fractures.

The attack was the worst mass killing in the country since a 2001 arson attack on a building in Tokyo's Kabukicho district, which killed 44 people. The death toll from Thursday's fire was greater than the Tokyo sarin gas attack on a subway in 1995, which killed 13.

Anime fans and mourners Friday began visiting the building and laid flowers in tribute to those who had lost their lives.

"I was so encouraged by the KyoAni works," said one young fan, calling the studio by its popular name. "I have no words to say in sorrow."

On Thursday, Japanese Prime Minister Shinzo Abe added his voice to the outpouring of grief on Twitter, saying that he was left speechless at the "gruesomeness of the crime," and offered condolences to victims.

The fire started at Kyoto Animation's 1st Studio at 10:30 a.m. local time on Thursday (9:30 p.m. ET) after the suspect began pouring what appeared to be gasoline on the first floor of the studio before setting it alight with an "ordinary lighter," police said.

Police said a local resident reported hearing an explosion-like sound coming from the building around the time the fire broke out.

A witness told police the suspect shouted "Die" as he spilled the liquid. A backpack containing several knives and two canisters of the gasoline-like liquid were discovered near the site, according to Kyoto police.

As flames tore through the building an employee ran to report the fire. On his return, he saw the suspect lying on the ground about 100 meters away from the studio, police told CNN.

The suspect, who suffered heavy burns to his face, legs, arms and torso, asked officers who had arrived to apprehend him "are you going to arrest me?"

Footage from the scene Thursday showed thick smoke billowing out of the building, which is located in a residential area several kilometers south of Kyoto Station. It took four hours for firefighters to bring the blaze under control.

'A terrible loss for both humanity and art'

Kyoto Animation's CEO Hideaki Yata told reporters the company had received death threats by mail, which had been sent to the police, and expressed sorrow that workers in the industry had been targeted.

"They are the people who carry the Japan's animation industry on their shoulders. I can't bear to accept the fact they are being hurt or losing their lives," he said.

Kyoto Animation received a death threat through its webpage in October 2018, Kyoto police said. The company filed a formal complaint to police but they were unable to identify who had sent it. Police do not know if the originated from Aoba.

Founded in 1981, Kyoto Animation -- known as KyoAni -- has made a name for itself producing high quality animations that draw on both the mystical and the mundane.

Among Japan's better-known studios, its popular works include "Free!," manga series "K-On!," the anime TV adaptation of "the Melancholy of Haruhi Suzumiya" and "Violet Evergarden," which Netflix picked up in 2018.

On its website, the company said its philosophy included promoting a "humanitarian" corporate culture and "promoting the growth of people."

Writing for CNN , Susan Napier, Goldthwaite Professor of Rhetoric and Japanese Studies at Tufts University, said KyoAni had "developed a reputation for being a unique workplace" by employing writers on a salaried basis and "offering the money and security that allowed them to create works of high quality."

The studio also operated a school for animators.

Napier said the destruction was "a significant loss, both in terms of the terrific tragedy of human life and the lost creative work that may have been stored in the studio over its almost 40-year existence."