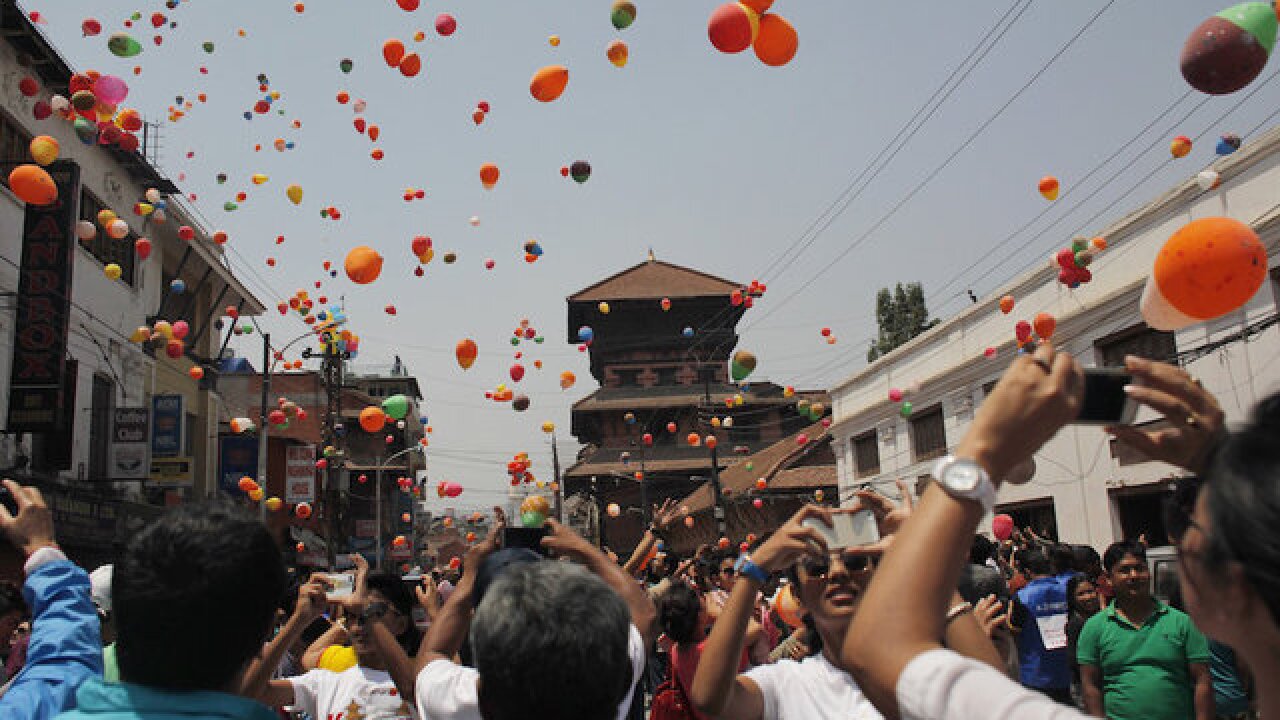 KATHMANDU, Nepal (AP) — People gathered Sunday at the remains of a historic tower in Nepal's capital that collapsed in a devastating earthquake a year ago, as Nepalese held memorial services to mark the anniversary of a disaster that killed nearly 9,000 people and left hundreds of thousands homeless.

Minor protests were also held, with demonstrators angry at the slow rate of reconstruction in the wake of the magnitude-7.8 quake that ravaged vast areas of Nepal.

Prime Minister Khadga Prasad Oli laid a wreath at the ruins of the Dharahara tower in the heart of Kathmandu. The iconic structure collapsed in the April 25, 2015, quake, killing 132 people. In all, 8,856 people died in the disaster.

Participating in the memorial ceremonies were people who lost loved ones in the quake, and others who simply came to pray for those killed.

"I lost a friend who was working at the top of the tower on that day. I hope he and others are in a good place," said Ram Shrestha, pointing at the remains of the Dharahara tower. He said that he had just stepped out a few minutes before the earthquake struck to go shopping.

Madhav Newpane, who runs a shop near the tower, witnessed its collapse. He returned on Sunday with a bouquet of flowers and candles.

"There were many people killed here on that day. I will never be able to forget that day," Newpane said.

About 100 protesters scuffled with riot police outside the prime minister's office demonstrating against the slow reconstruction of the homes. More than 600,000 homes were destroyed and around 185,000 damaged in the quake.

"Government, where is reconstruction. Open the gates of the government," the protesters chanted as they tried to force their way through a police barricade.

According to the International Federation of Red Cross and Red Crescent Societies, an estimated 4 million people are still living in sub-standard temporary shelters in conditions that pose a threat to their health and well-being. Only 661 families have received the first installment of a 200,000-rupee ($1,868) government grant, getting 50,000 rupees ($467) so far.

Nepal has made almost no progress in rebuilding from the quake despite foreign donors pledging more than $4 billion in aid during a donor's conference last year. The government, in disarray for nearly a decade, has not regrouped enough to be a strong force for reconstruction.

Out of the $4.1 billion pledged, Nepal has so far received just $1.28 billion. The delay in getting the money has been blamed on the government taking months to set up the National Reconstruction Authority, which was done only in December.

Finance Minister Bishnu Prasad Paudel said the delay was because it was necessary to conduct a detailed survey of the damaged houses before reconstruction could begin.

Now that the work is completed in 11 of the 14 districts affected by the earthquake, work will proceed at full speed, Paudel said.