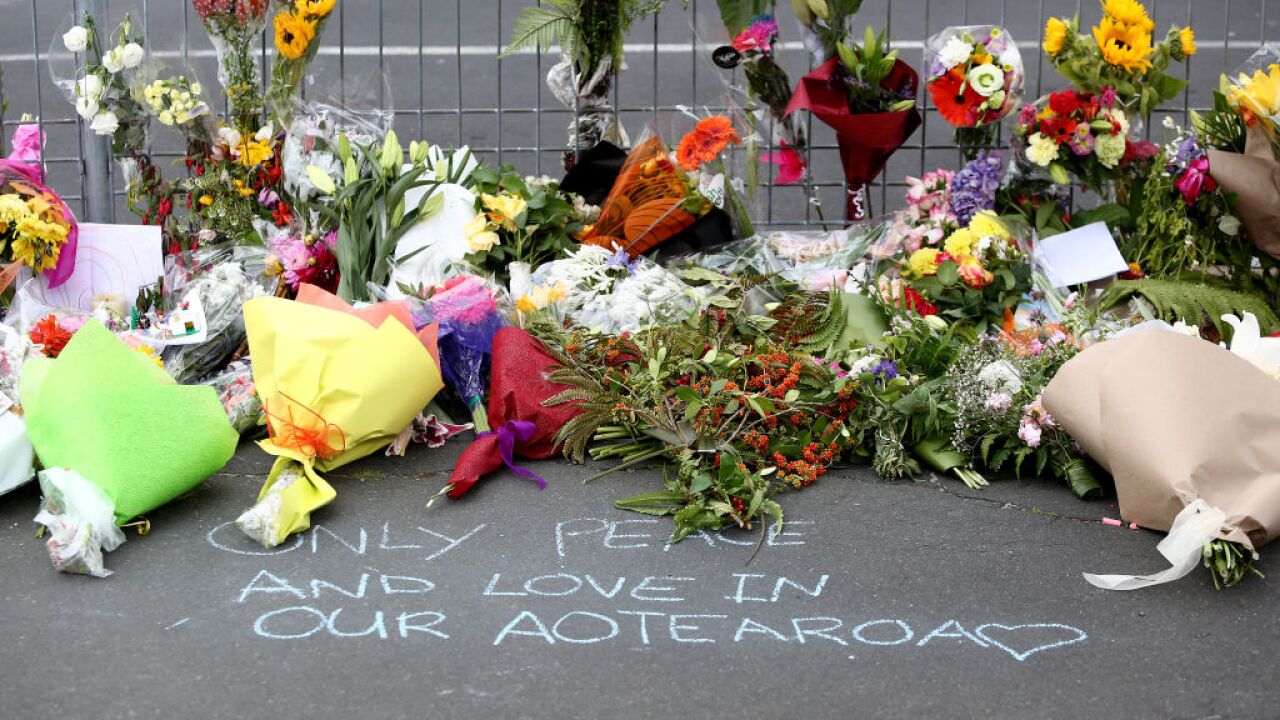 The main suspect in the deadly assault on two New Zealand mosques that was livestreamed on Facebook is a 28-year-old Australian who'd traveled the world and obtained his firearms legally, authorities said Saturday.

Brenton Harrison Tarrant has been charged with one count of murder, according to a charging sheet from Christchurch District Court. More charges will be filed later in the attacks that left at least 49 people dead, police said on Twitter .

Tarrant said nothing and showed no expression when he appeared in court Saturday morning wearing a white boiler suit. During his brief appearance Tarrant was handcuffed and accompanied by three officers armed with tasers. He's scheduled to be back in court April 5.

Part of the evidence against Tarrant may come from social media. Video of the attack on Friday worshipers and a 16,000-word manifesto filled with anti-immigrant and anti-Muslim sentiment were posted online to an account under the name Brenton Tarrant. Police have not confirmed the account belongs to the man now in custody, or that he authored the manifesto.

Speaking at a press conference Saturday, New Zealand Police Commissioner Mike Bush said Tarrant was "not willing to be arrested."

Describing the arrest and video of the arrest, Bush said: "Again, I think you'd probably seen some of that video, there was live audio coming back to my command center in Wellington of that apprehension and I can tell you, as I was listening to that, the person was non-compliant."

If convicted of murder, he won't face the death penalty because it's not used in New Zealand. The maximum penalty for the charge is life imprisonment.

Police in New South Wales say they've been speaking to Tarrant's Australian-based family, adding that the family has been "assisting and cooperating."

Speaking at a news conference Saturday morning, Prime Minister Jacinda Ardern said the suspect was from Australia and not a resident of Christchurch. He has not appeared on any terror watch lists, she said.

"This individual has traveled the around the world with sporadic periods of time spent in Christchurch," she said.

He was recently based in Dunedin, a city about 225 miles to the south of Christchurch, she said.

Two improvised explosive devices were attached to a vehicle as part of the attack, Bush said.

Authorities are still piecing together what happened Friday afternoon in Christchurch. Police said an armed man killed 41 people at the al Noor mosque on Deans Avenue and seven people at the Linwood mosque on Linwood Avenue. One person died in the hospital from injuries. Tarrant was arrested near the scene.

Two other people were arrested in possession of firearms. Police are trying to ascertain their involvement. New Zealand authorities say they had no prior information on any of those detained.

A fourth person who had been taken into custody was later determined to be an armed bystander who wanted help police.

The graphic 17-minute video shared on social media purports to show a portion of the attack.

The footage, which appears to have been taken with a helmet camera, shows a man driving through the streets of Christchurch. The camera pans to several weapons on the passenger side of the vehicle. At one point, the man turns the camera on himself, showing his face.

The song "Remove Kebab," an anti-Muslim anthem that pays tribute to a Bosnian Serb leader convicted of genocide, plays on the stereo as he drives.

He can be seen using GPS to navigate his way to Masjid al Noor mosque, where he opens fire on worshippers in a horrific attack.

Police said they were aware of the video. They have asked social media users to stop sharing the graphic footage, which was streamed live on Facebook.

"New Zealand Police alerted us to a video on Facebook shortly after the livestream commenced and we removed both the shooter's Facebook account and the video. We're also removing any praise or support for the crime and the shooter or shooters as soon as we're aware," a spokesperson for Facebook New Zealand, Mia Garlick, said in a statement.

Just before the attack, an account believed to belong to the gunman posted a link to an 87-page white nationalist manifesto on Twitter and 8chan, an online messaging board that has been used by anonymous accounts to share extremist messages and cheer on mass shooters. The post on 8chan appeared to include a link to the gunman's Facebook page, where he said he would later broadcast the attack live.

Referenced are Alexandre Bissonnette, who was sentenced to life in prison for the Quebec mosque shooting in 2017, and Luca Traini, who gunned down black immigrants in central Italy last year. One photo also shows a tactical vest emblazoned with a neo-Nazi symbol known as the black sun, or Sonnenrad in German, used by white supremacist groups.

The unsigned manifesto, which is more than 16,000 words, is filled with anti-immigrant and anti-Muslim sentiments, as well as explanations for an attack.

In it, he identifies himself as a 28-year-old white man, born in Australia, and lists the white nationalists who have inspired him. He also outlines his planned "terrorist attack" on the "Christchurch and Linwood" mosques; the two mosques that were targeted were al Noor mosque on Deans Avenue and Linwood mosque on Linwood Avenue. Both mosques are in Christchurch's city center.

Authorities have said that they "will not be discussing the offenders' possible motivations or the causes of this incident" at this stage.

Prime Minister Scott Morrison of Australia, who identified one of the suspects arrested as Australian-born, said the attack was carried out by an "extremist right-wing, violent terrorist." Morrison's New Zealand counterpart Jacinda Ardern confirmed that one of the attackers was Australian.