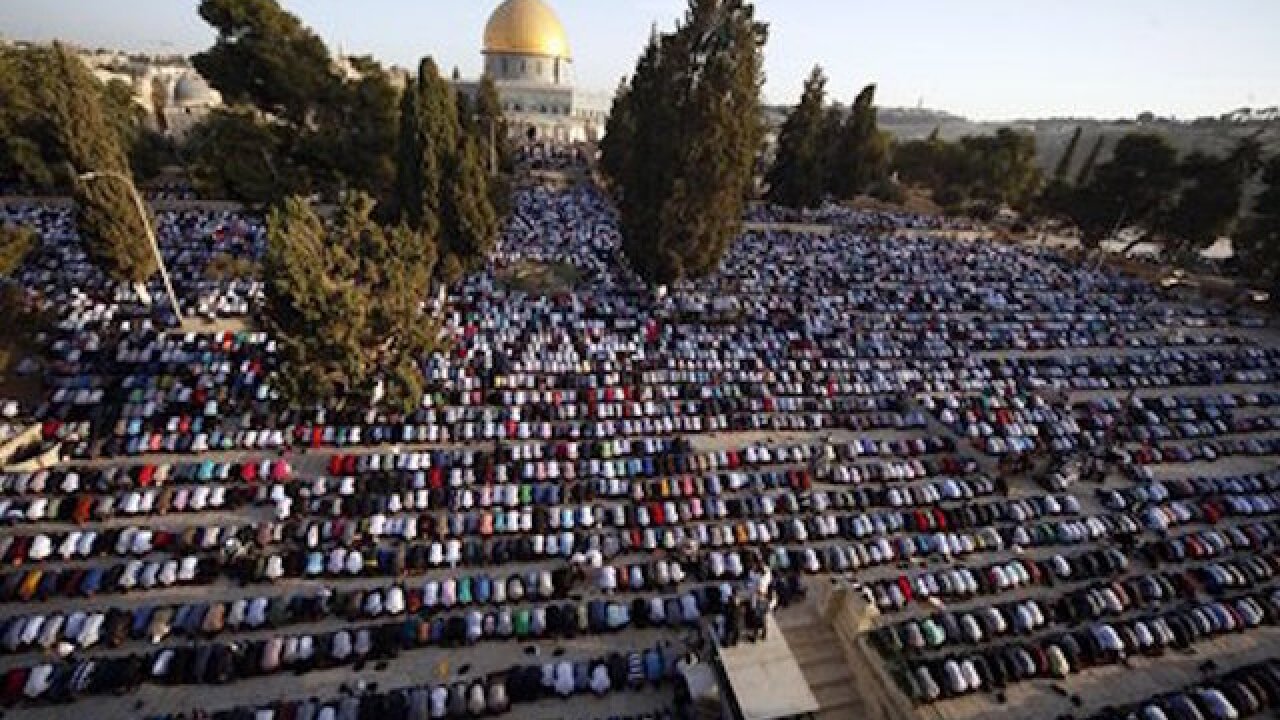 Copyright Associated Press
Mahmoud Illean
<p>In this Sept. 24, 2015 file photo, Palestinians pray during the Muslim holiday of Eid al-Adha, near the Dome of the Rock Mosque in the Al Aqsa Mosque compound in Jerusalem's old city. On Friday, March 18, 2016 a government spokesman said Jordan will install video cameras 'within days' at the tense Jerusalem shrine revered by both Muslims and Jews. The cameras were to have been set up months ago to help lower friction at the site that has contributed to the current round of Israeli-Palestinian violence. (AP Photo/Mahmoud Illean, File)</p>

AMMAN, Jordan (AP) — Jordan's prime minister on Monday said his government has decided to call off a plan to install surveillance cameras at Jerusalem's most sensitive holy site, derailing a U.S.-brokered pact to ease tensions at the volatile hilltop compound.

The decision came just days before the Jewish holiday of Passover — a time of increased activity at the site. The spot is revered by Jews, who refer to it as the Temple Mount, and Muslims, who call it the Noble Sanctuary. It has been a frequent scene of violence in the past.

In a deal brokered by U.S. Secretary of State John Kerry, Jordan offered to install the cameras last fall after clashes between Palestinian protesters and Israeli security forces.

The Palestinians had accused Israel of secretly plotting to take over the site — a charge Israel strongly denies — while Israel pointed to videos showing Palestinian protesters using the mosque as cover while throwing stones and firecrackers at police. The idea was that transparency by both sides would help ease tensions.

But the plan quickly ran into trouble, with the Palestinians objecting to Israeli demands to place cameras inside the mosque. The Palestinians also said that Israel would use the cameras to spy on them.

Jordan's prime minister, Abdullah Ensour, told the state-run Petra News Agency that Jordan was calling off the plan due to Palestinian concerns.

"We were surprised since we announced our intention to carry out the project by the reactions of some of our brothers in Palestine who were skeptical about the project," he said. "We have found that this project is no longer enjoying a consensus, and it might be controversial. Therefore we have decided to stop implementing it."

The Jordanian decision could deal an embarrassing blow to Kerry, who had hailed the deal at the time it was announced in October and pushed behind the scenes in recent months for the sides to wrap it up.

There was no immediate reaction from the U.S., Israel or the Palestinians.

The site is revered by Jews as the location where the biblical Temples once stood. Today, it is home to the Al-Aqsa Mosque, the third-holiest site in Islam. Under a decades-old arrangement, Jews are allowed to visit the site, but not pray there. Increased visits to the compound last fall by Jewish nationalists, coupled with some restrictions on Muslim access, set off clashes that quickly escalated into months of violence across Israel and the West Bank.