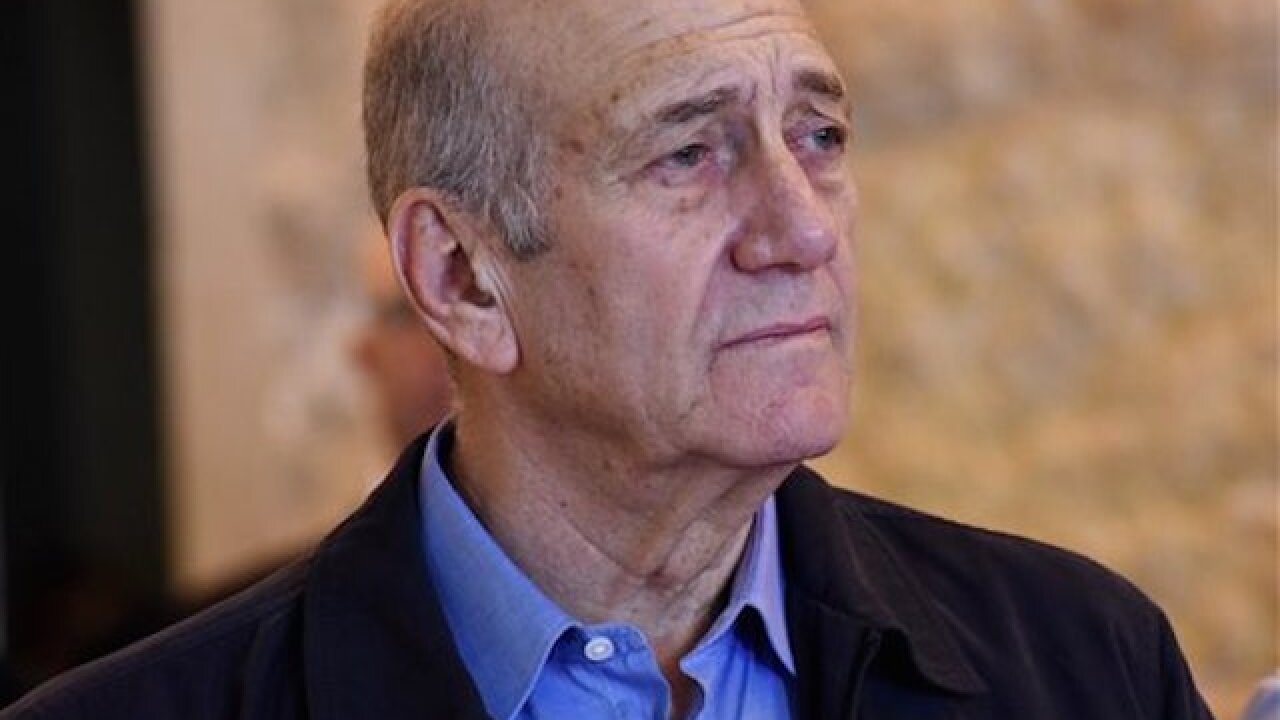 Copyright Associated Press
Debbie Hill
<p>In this Dec. 29, 2015 file photo, former Israeli Prime Minister Ehud Olmert leaves the courtroom of the Supreme Court after the court ruled on his appeal in the Holyland corruption case in Jerusalem. An Israeli court has convicted Olmert on two counts of obstruction of justice for pressuring a confidant not to testify in multiple legal cases against him. The ruling Tuesday, Feb. 2, 2016, follows a plea bargain Olmert signed last month in which he pleaded guilty to the charges. (Debbie Hill/Pool File Photo via AP)</p>

JERUSALEM (AP) — Israel's former Prime Minister Ehud Olmert started serving a 19-month prison sentence for bribery and obstruction of justice on Monday, becoming the first Israeli premier to be imprisoned and capping a years-long legal saga that forced him to resign in 2009 amid the last serious round of Israeli-Palestinian peace talks.

Olmert walked into the Maasiyahu prison in central Israel hours after he released a video making a last-minute plea to Israelis meant to salvage his legacy. In the video, he appealed to the nation to remember his peace-making efforts as leader and denied any wrongdoing in the bribery conviction against him.

The three and a half minute video, released by his office and filmed at his home a day earlier, shows a weary-looking Olmert. He says it is a "painful and strange" time for him and his family and that he is paying a "heavy" price, but also adding that he has accepted the sentence because "no man is above the law."

"At this hour it is important for me to say again ... I reject outright all the corruption allegations against me," Olmert said in the footage. He said that in hindsight, the Israeli public might view the charges against him and the seven-year legal ordeal that enveloped him in a "balanced and critical way."

"I hope that then many will recognize that during my term as prime minister, honest and promising attempts were made to create an opening for hope and a better future of peace, happiness and well-being," he said.

Olmert, 70, was convicted in March 2014 in a wide-ranging case that accused him of accepting bribes to promote a controversial real-estate project in Jerusalem. The charges pertained to a period when he was mayor of Jerusalem and trade minister, years before he became prime minister in 2006, a point he reiterated in his video statement Monday.

He was initially sentenced to six years in the case, but Israel's Supreme Court later upheld a lesser charge, reducing the sentence to 18 months. That was extended by a month earlier this year for pressuring a confidant not to testify in multiple legal cases against him.

Olmert is also awaiting a ruling in an appeal in a separate case, in which he was sentenced to eight months in prison for unlawfully accepting money from a U.S. supporter.

Israel has sent other senior officials to prison, including Moshe Katsav, who held the mostly ceremonial post of the country's president and who is now serving a seven-year prison term for rape.

But having the once popular Olmert behind bars was met with mixed emotions by many Israelis, who viewed the milestone as a proud moment for Israel's robust justice system but also a sorrowful one.

"When you look at a person like this, who is the salt of the earth, who is so talented, who is so charming, who is so capable, the fact that he is going to prison is something sad," Dan Margalit, a columnist with the daily Israel Hayom and a former Olmert confidant, told Israeli Army Radio.

Olmert was forced to resign in early 2009 amid the corruption allegations, which undermined the last serious round of Israeli-Palestinian peace talks and cleared the way for hard-liner Benjamin Netanyahu's rise to power.

Olmert led his government to the Annapolis peace conference in November 2007 — launching more than a year of ambitious, but ultimately unsuccessful U.S.-brokered peace talks with the Palestinians.

Olmert has said he made unprecedented concessions to the Palestinians during those talks — including a near-total withdrawal from the West Bank and an offer to place Jerusalem's Old City under international control — and was close to reaching an agreement at the time of his resignation.

Despite his lengthy career as a public servant, former prison officials said Olmert would be treated like any other inmate, despite being held in a special wing for security reasons.

Haim Glick, a former Israeli prison service official, told Israeli Channel 2 TV that Olmert would need to participate in roll call, be in his cell by 10 p.m. and have limited phone use.

"He will receive good treatment like the rest of the prisoners but not any better than them," he said.