Germany: Cause sought in train crash 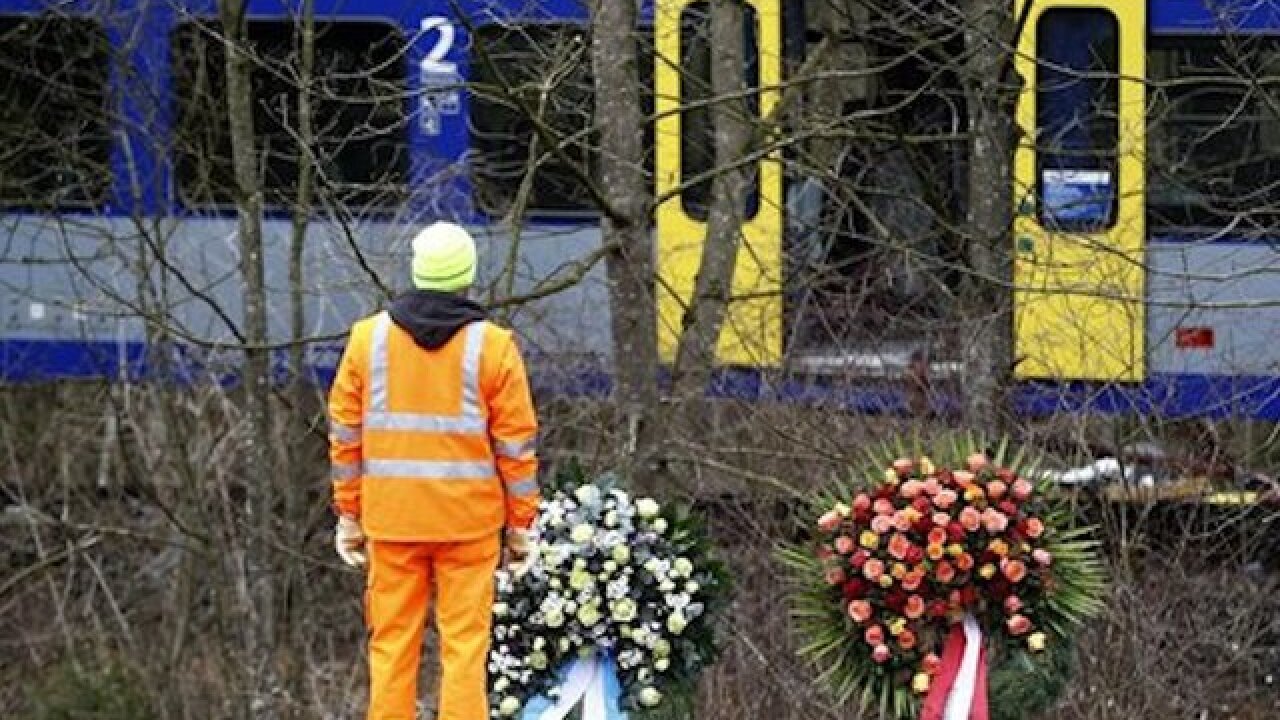 BAD AIBLING, Germany (AP) — Emergency workers on Wednesday started removing the wreckage from the head-on train crash that killed 10 people and injured dozens in southern Germany, after police said they are no longer looking for another victim.

Police spokesman Stefan Sonntag said authorities came to the conclusion that no one was unaccounted-for after contacting all hospitals in the rural region.

Authorities are trying to determine why multiple safety measures failed, allowing two trains to travel on the same single-line track and smash into each other in Bad Aibling in Bavaria on Tuesday morning. They are considering both possible technical errors and human failure.

At the scene, 40 miles (60 kilometers) southeast of Munich, a huge crane was brought in Wednesday to start moving away the wreckage from the tracks — a job the German news agency dpa reported would take two days. About 100 emergency workers are helping with the removal.

On the investigation front, the German transport ministry said both the government's train accident investigation office and local prosecutors are looking into the cause of the crash.

Asked about third-party actions that might have led to the accident, she said, "I can only say there are no indications of this yet, but the investigation is still ongoing."

Police spokesman Juergen Thalmeier warned reporters in Bad Aibling not to jump to early conclusions. While the train dispatcher had already been interrogated, that did not mean he was necessarily under suspicion.

German Transport Minister Alexander Dobrindt told German news channel n-tv that one black box has already been examined and that based on this analysis there seem to have been no technical problem, but that investigators have not yet finished their overall evaluation.

Around 50 police officers are working on the case, dpa reported.

The news agency also reported that all victims have been identified and that both train drivers were among the dead. The names of the victims were not released, but all of them were men aged between 24 and 60.

Some 17 injured are still in serious condition, but all are expected to survive, dpa said.

Officials said it was not clear for how long the train line between Holzkirchen and Rosenheim would be out of commission. The operator, Bayerische Oberlandbahn, offered bus services for passengers instead.

The trains crashed on a stretch of track running between a river and a forest. Although the first rescue crews were on the scene in minutes Tuesday morning, it took hours for all survivors to be airlifted or shuttled by boat across the river to waiting ambulances.

The two trains were supposed to pass one another at a station where the track was divided, and a safety system installed on much of Germany's labyrinthine rail network was supposed to automatically brake trains that end up on the same track heading toward each other, authorities said.

Instead, the two trains slammed into one another on a curve, meaning that their engineers wouldn't have seen each other until it was too late.

German rail operator Deutsche Bahn said safety systems on the stretch where the crash occurred had been checked as recently as last week.