Bridge collapse in Italy came after years of warnings 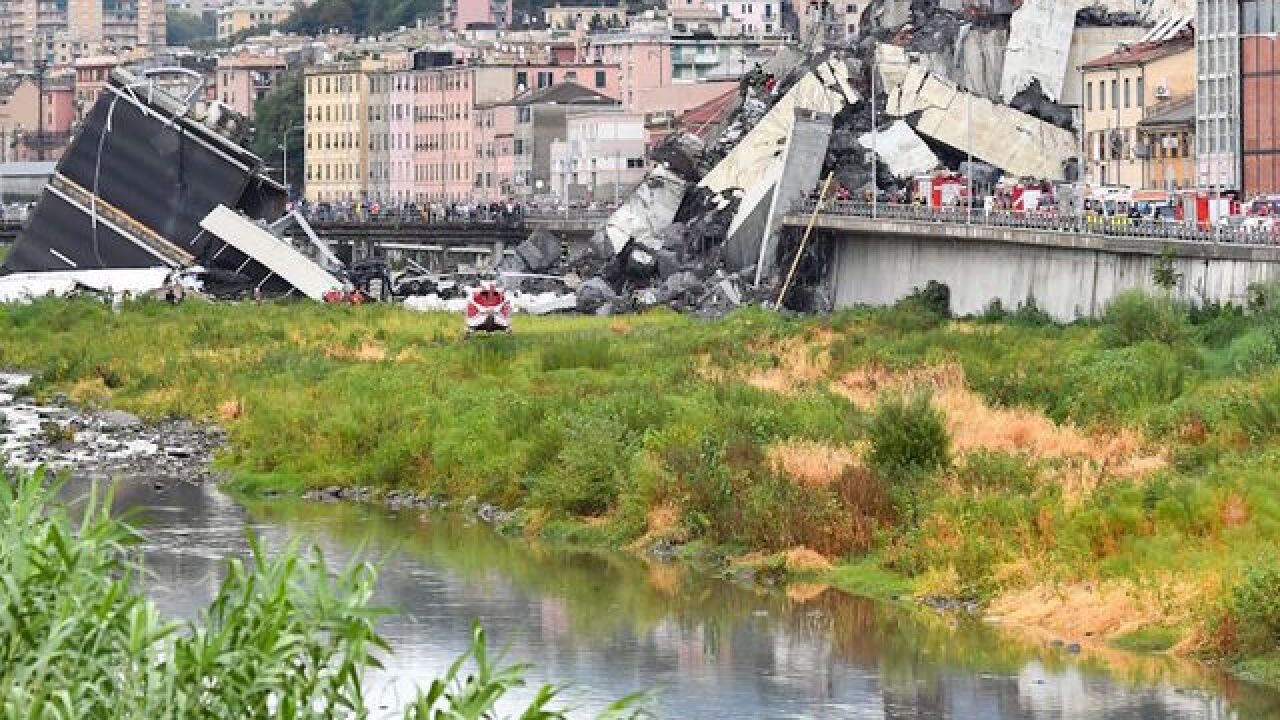 Image copyright 2018 Getty Images. All rights reserved. This material may not be published, broadcast, rewritten, or redistributed.
Paolo Rattini
<p>A general view of the Morandi bridge which collapsed on August 14, 2018 in Genoa, Italy. </p>

First the disaster, now the polemic.

As hundreds of rescuers continued their search Wednesday for survivors of a bridge collapse in Italy that killed dozens of people the day before, questions were being asked about how such an accident could happen in a modern industrialized country, the eighth-biggest economy in the world.

Fingers are being pointed and there are calls for heads to roll. And, as can be expected in Italy, political infighting is reaching a fever pitch.

Built in the 1960s, the Morandi Bridge was a vital link of the A10 highway that connects northwest Italy to France, across the Polcevera river in central Genoa. It was one of the busiest bridges in the country, carrying freight and tourists to and from the port city.

Eyewitnesses told of a huge flash of lightning hitting the structure seconds before the massive stretch of the bridge came crashing down. Engineers doubt that a lightning strike could have caused such devastation.

But there had been warnings for years that the Morandi Bridge was an accident waiting to happen.

In 2012, Giovanni Calvini, then the head of the Genoa branch of the Italian employers organization Confindustria, when seeking his organization's backing for new roads, warned in an interview with Genoa's Il Secolo XIX newspaper, "This junta mustn't think that the realization of public works isn't their problem. Because look, when in 10 years' time the Morandi Bridge collapses, and we all get stuck in traffic jams for hours, we will remember the names of the people who said 'No.'''

In 2016, Antonio Brencich of the engineering faculty at the University of Genoa also sounded the alarm, calling the structure an "engineering failure" in an interview with broadcaster Primocanale.

"The Morandi Bridge was constantly undergoing maintenance: it was affected by serious corrosion problems related to the technology that Morandi himself had patented, but stopped using, and which proved to be disastrous," he told the Italian newspaper La Repubblica on Tuesday.

"There are steel cables that are weighted and run inside sheaths, and then there is a system to fill the sheaths to prevent corrosion that can damage the cables. But the system didn't work as it was supposed to. The weighing of the cables didn't work as planned. Protection from corrosion wasn't what was hoped for. This caused the structure to deteriorate at great speed. Just think, the east tower was reinforced just 20 years after the opening of the bridge, evidence of premature decay. Twenty years is nothing, a blink of an eye in the life of a bridge."

Stefano Marigliani, a senior executive at Autostrade in charge of the part of the toll road network linking the French and Italian Rivieras that includes the bridge, told the Financial Times that the structure "was monitored constantly beyond legal requirements" and that there was "no reason to consider it dangerous."

Autostrade del Italia, the privately owned company that had the contract for maintenance of the A10 motorway, said in a statement Tuesday that "work was underway to shore up the foundations of the viaduct and that, as planned, a car bridge had been installed to allow maintenance activities to be carried out."

"First of all the top executives of Autostrade have to resign," he said in a message on Facebook. "If they can't manage the motorways, then the state will do it."

Luigi Di Maio, the deputy prime minister and leader of Five Star, the senior partner in Italy's populist coalition government, told reporters Tuesday: "If this bridge was dangerous then Autostrade should have closed it a long time ago. We will look at all these details and as Prime Minister (Giuseppe) Conte has said, we are responsible for all national infrastructure and we will look at other facilities in the same condition. We are going to look at everything across the board."

Indeed, over the past five years, 10 bridges have collapsed in Italy, killing seven more people according to the Corriere della Sera newspaper.

It will not come as a surprise to drivers navigating some of Italy's big cities like Rome, where there are potholes aplenty, that overall spending on road repair is way below that of neighboring France and Germany, according to the OECD.

The irony of the Morandi Bridge disaster is that a solution seemed to have finally been found, and agreed upon.

Earlier this year, the EU finally approved billions of euros in funding for the Gronda project, which would take traffic off the bridge and out of the center of the city.

But the election of a populist government in March injected new instability. Beppe Grillo, founder of the Five Star Movement, was a leading light in the "No Gronda" anti-motorway movement in Genoa.

Five Star dismissed the warnings of the bridge's imminent collapse as a "fairytale" on its official website. The article has since been taken down, but can be seen on web archives.

Only two weeks ago, Toninelli, the transport minister, called for a review of the Gronda project and other pipeline projects.

"We are planning to carry out a cost-benefit analysis, essential numbers for any government, with the goal of maximizing the positive effects of public works in terms of economic development, access to mobility, with minimum negative impact," Italian news agency ANSA reported him as saying.

Ignoring the fact that the EU had approved the Gronda funds, Matteo Salvini -- Italy's other euroskeptic deputy prime minister -- seized on the Morandi Bridge collapse to question whether EU budget rules had contributed to the disaster by preventing much-needed investment in infrastructure.

"If there are European constraints preventing us from spending money to secure the schools attended by our children or the highways our workers are traveling on, we will put the safety of Italians ahead of everyone and everything," he wrote on Twitter.