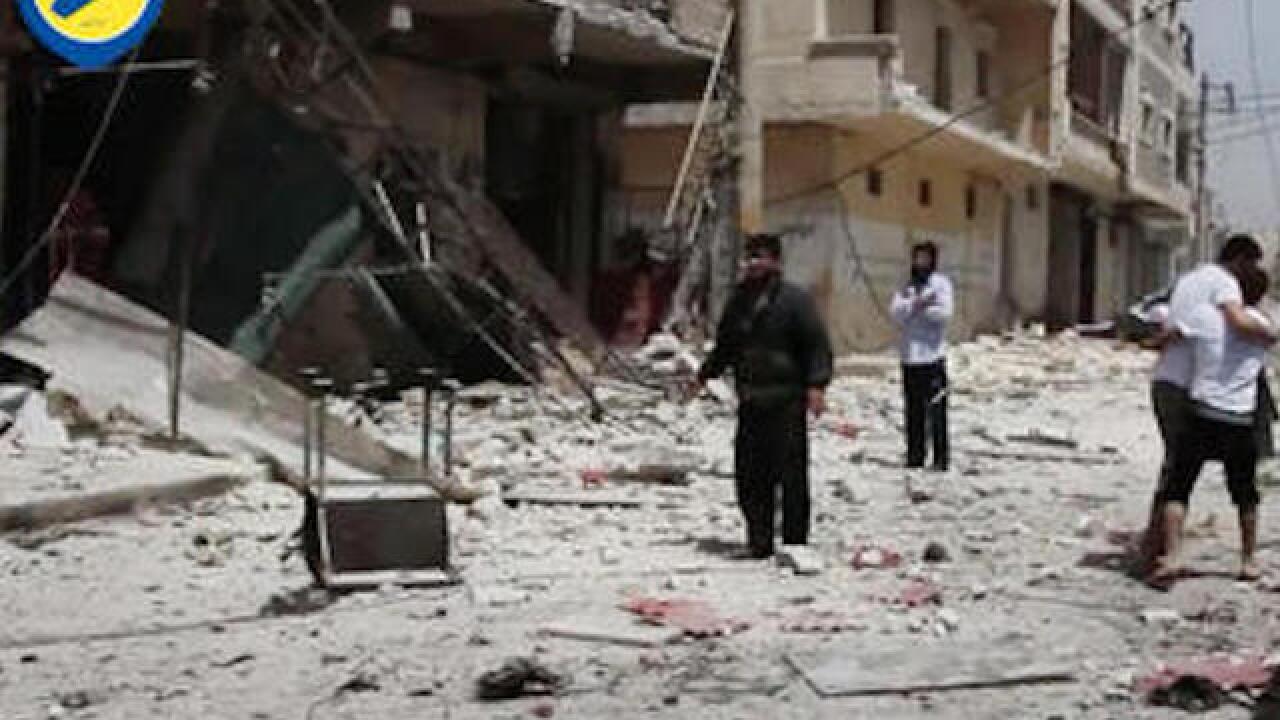 Copyright Associated Press
Uncredited
<p>In this Sunday, April 24, 2016, file photo made from video posted online by the Syrian Civil Defense White Helmets, a man helps an injured man as others stand in rubble after airstrikes and shelling hit Aleppo, Syria. A military buildup in northern Syria coupled with heavy fighting and mounting civilian casualties spells the end of a cease-fire that for two months brought much needed relief to war-stricken Syrians, ushering in what could be an even more ruinous chapter in the country's five-year-old conflict. (Syrian Civil Defense White Helmets via AP video)</p>

BEIRUT (AP) — A wave of airstrikes and shelling killed more than 60 people in less than 24 hours in the northern Syrian city of Aleppo, monitors and activists said Thursday. The contested city is now one of the main battlegrounds of Syria's devastating civil war, with a cease-fire that has collapsed and peace talks in Geneva stalled.

At least 27 people died as a hospital supported by Doctors Without Borders and the International Committee for the Red Cross and nearby buildings were hit overnight in the rebel-held part of Aleppo.

The U.N. envoy for Syria appealed early Thursday on the U.S. and Russia to help revive the peace talks and a cease-fire, which he said "hangs by a thread."

However, the violence only escalated. New airstrikes Thursday in residential areas in the rebel-held part of the city killed at least 20 while state media reported that at least 1,000 mortars and rockets were fired at government-held areas of Aleppo, killing at least 14 civilians.

The chief Syrian opposition negotiator Mohammed Alloush blamed the government of President Bashar Assad for the violence. He told The Associated Press that it shows "the environment is not conducive to any political action."

About 200 civilians have been killed in the past week, nearly half of them around Aleppo. There has also been shelling in Damascus, along with a car bombing — both rarities for the capital. The ICRC said the fighting, including the destruction in airstrikes overnight of a key hospital in Aleppo, is putting millions at grave risk.

With peace talks in Geneva completely deadlocked, Syrians are regarding the escalating bloodshed with dread, fearing that Aleppo is likely to be the focus of the next phase of the war.

Rebel commanders said government forces have been mobilizing soldiers, equipment and ammunition in preparation for a military action in Aleppo.

The well-known al-Quds filed hospital supported by MSF and ICRC and located in the rebel-held district of Sukkari was hit shortly before midnight Wednesday, according to opposition activists and rescue workers. Six hospital staff and three children were among the 27 who died there.

The Syrian Civil Defense, a volunteer first-responders agency whose members went to the scene of the attack, put the death toll at 30 and said the dead included six hospital staff. Among those slain was one of the last pediatricians remaining in opposition-held areas of the contested city and a dentist.

The defense agency, also known as the White Helmets, said the hospital and adjacent buildings were struck in four consecutive airstrikes. It said there were still victims buried under the rubble and that the rescue work continued. The Britain-based Syrian Observatory for Human Rights said three children were among the 27 victims but it was not immediately clear if they were patients at the hospital.

MSF said in a statement that at least 14 patients and staff were among those killed, with the toll expected to rise. "Destroyed MSF-supported hospital in Aleppo was well known locally and hit by direct airstrike," it said.

"This devastating attack has destroyed a vital hospital in Aleppo, and the main referral center for pediatric care in the area," said Muskilda Zancada, MSF head of Syria mission. "Where is the outrage among those with the power and obligation to stop this carnage?"

The 34-bed, multi-story hospital had an emergency room and offered services such as obstetric care, outpatient and inpatient treatment. It had an intensive care unit and an operating theatre. Eight doctors and 28 nurses worked full time in the hospital, the MSF said. It has supported the hospital since 2012, the aid group said.

An unnamed Syrian military official quoted on state TV denied reports that the hospital was targeting, saying they were false.

A video posted online by the White Helmets showed a number of lifeless bodies, including those of children, being pulled out from a building and loaded into ambulances amid screaming and wailing. It also showed distraught rescue workers trying to keep onlookers away from the scene, apparently fearing more airstrikes.

Shortly after midday, new airstrikes in rebel-held areas killed at least 20 people in two neighborhoods, the Syrian Civil Defense and the Observatory said.

Videos provided by activists show scenes of dust rising up from buildings on fire as men and women run away from collapsing houses and children cry, looking for their parents. In one clip, a man is seen lifting his daughter out of the rubble.

State media said at least 1,300 rockets and missiles fell in residential areas in government controlled parts of the city, killing 14 people on Thursday.

Alloush, who was one of the leading negotiators of the opposition in the Geneva talks, described the airstrikes as one of the latest "war crimes" of Assad's government.

"Whoever carries out these massacres needs a war tribunal and a court of justice to be tried for his crimes. He does not need a negotiating table," Alloush told the AP in a telephone interview. "Now, the environment is not conducive for any political action."

The February 27 cease-fire has been fraying in the past weeks as casualty figures from violence mount, particularly in Aleppo and across northern Syria. Airstrikes earlier this week also targeted a training center for the Syrian Civil Defense, leaving five of its team dead in rural Aleppo.

Since April 19, nearly 200 people have died, including at least 44 in an airstrike on a market place in rebel-held area in northern Idlib province, as well as dozens of civilians in government-held areas from rebel shelling.

The U.N. envoy for Syria, Staffan de Mistura, briefed the U.N. Security Council via videoconference about the largely stalled indirect talks between the Western- and Saudi-backed opposition and envoys from Assad's government, which has the backing of Moscow.

He said that after 60 days, the cessation of hostilities agreed to by both sides "hangs by a thread."

"I really fear that the erosion of the cessation is unraveling the fragile consensus around a political solution, carefully built over the last year," de Mistura said in his council briefing obtained by The Associated Press. "Now I see parties reverting to the language of a military solution or military option. We must ensure that they do not see that as a solution or an option."

The talks foundered last week after the main opposition group, called the High Negotiating Committee, suspended its formal participation in the indirect talks with Assad's envoys to protest alleged government cease-fire violations, a drop in humanitarian aid deliveries and no progress in winning the release of detainees in Syria.