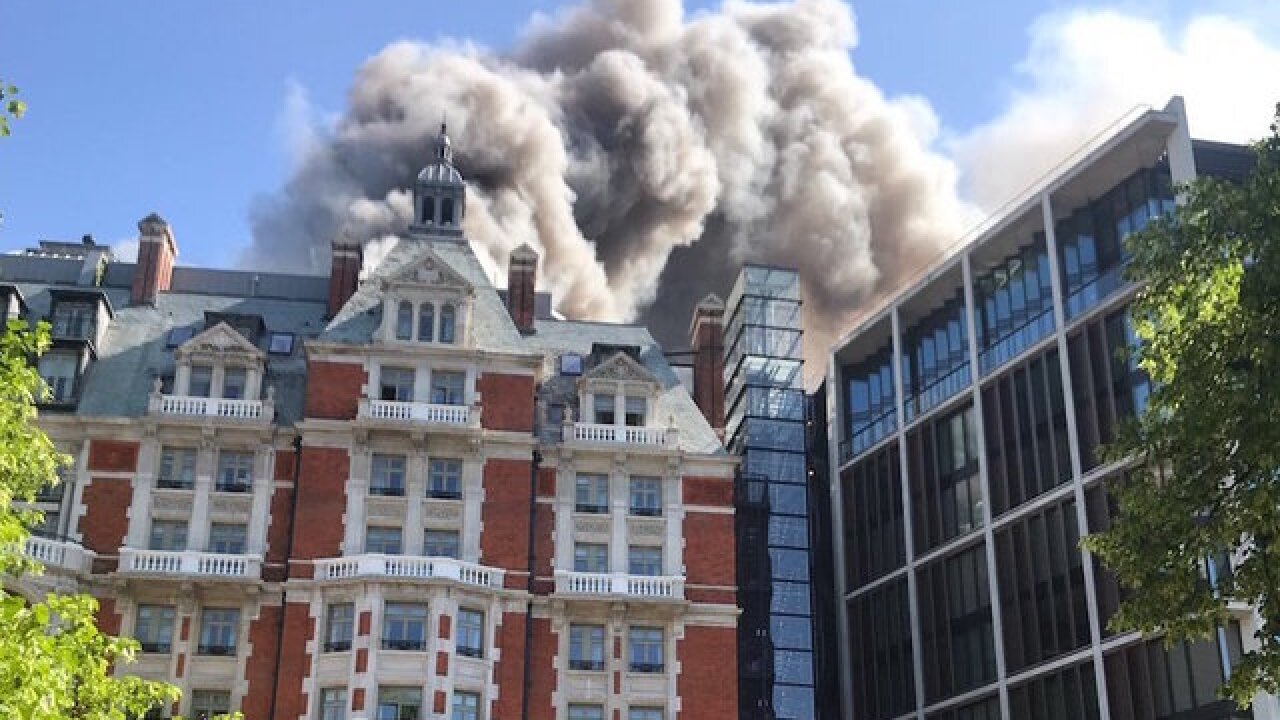 © 2018 Cable News Network, Inc.
Ennis El-Saiegh
<p>Dozens of firefighters have been sent to tackle a blaze at a hotel in the Knightsbridge area of London, the London Fire Brigade said Wednesday.</p>

A huge blaze tore across the roof of one of London's top hotels Wednesday, just days after it announced the completion of a multi-million-dollar renovation project.

More than 100 firefighters were sent to tackle the fire at the five-star Mandarin Oriental hotel, in the exclusive Knightsbridge district of the UK capital.

Plumes of thick, black smoke were seen billowing into the air above Hyde Park, as traffic in the area was brought to a standstill.

There were no immediate reports of any casualties. The hotel group said it believed that all guests had been evacuated.

First reports of the fire emerged just before 4 p.m. local time (11 a.m. ET). Two hours later, the London Fire Brigade said that 120 firefighters were still working to bring the fire under control and that the fire service was likely to remain on the scene for the rest of the evening.

The hotel had recently been undergoing a major refurbishment of its 181 guest rooms and suites. In a press release announcing the completion of the project last week, the Mandarin said the rooms were were "now more luxurious and comfortable than ever before." The largest suites, due to launch in July, offered "expansive views of leafy Hyde Park and the London skyline."

A Mandarin hotel group spokeswoman said that work on the building was still being carried out. While there were some guests staying in the hotel, it is believed they had "all been evacuated," she said.

There were also some apartments at the hotel, and the exact number of residents was being ascertained, she added.

A woman who had been in the hotel praised the evacuation. "Just evacuated Mandarin Oriental hotel to see this.... absolutely crazy!" wrote Anna Whiteley on Twitter. "So impressed by the organisation in bringing everyone to safety."

Knightsbridge is one of the most affluent neighborhoods in London, home to luxury stories Harvey Nichols and Harrods.

Roads in the area were closed while the emergency services responded to the fire and train services have been disrupted, the city's transit authority, Transport for London, said on Twitter.

The hotel was built in 1889 and first opened as an exclusive gentleman's club, according to the group's website. Just ten years later, a fire damaged the top three floors of one wing and destroyed a section of the roof. It was reopened in 1902 as a luxury hotel.

Members of Britain's royal family have often been guests at the hotel, the group said. The Duke and Duchess of Cambridge held a gala dinner in the grand ballroom before their wedding in 2011.