BBC reporter and famed photographer among 31 killed in Afghanistan 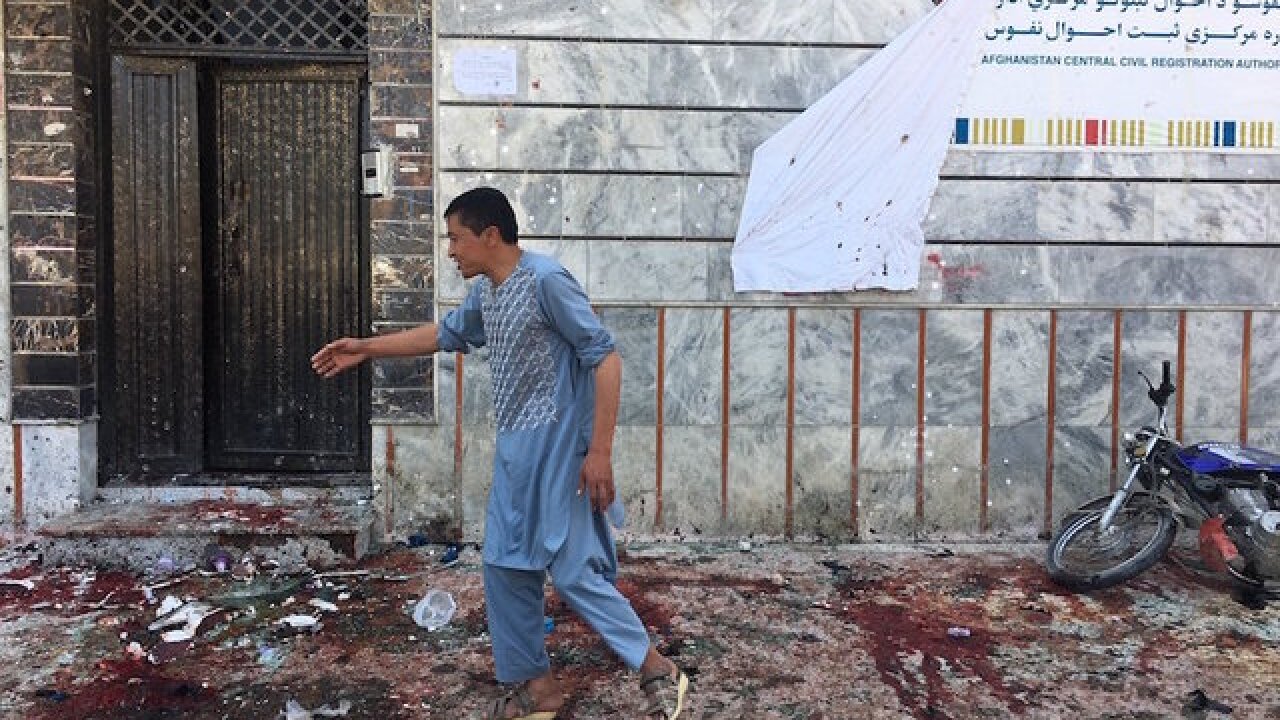 Ten journalists were among 31 people killed in a series of attacks in Afghanistan on Monday, including a BBC reporter and a well-known photographer who had written of the dangers of reporting in the Afghan capital.

Nine journalists were killed in suicide bombings in the capital, Kabul. Shah Marai of Agence France Presse was among a group of journalists who died when a bomber disguised as a TV cameraman detonated a second bomb at the site of an earlier explosion. Both attacks were claimed by Islamic State.

In a separate incident, Ahmad Shah, a 29-year-old reporter with the BBC's Afghan service, was shot dead by unknown gunmen in Khost province, the BBC said. Najib Sharifi, director of the Afghan Journalists Safety Committee, said Shah was on his way home when the attack took place.

Shah Marai of Agence France Presse was among a group of journalists who died when a bomber disguised as a TV cameraman detonated a second bomb at the site of an earlier explosion.

The other fatalities were Mahram Durani, a correspondent with Radio Free Europe and Ebadullah Hananzai, a reporter with the same outlet, Yar Mohammad Tokhi, a cameraman with ToloNews, Ghazi Rasoul, a reporter with 1TV and cameraman Nawroz Ali Khamosh, Ali Saleemi and Saleem Talash from Mashal TV. Sabawon Kakar, an RFE cameraman died in hospital from his injuries.

The first blast happened at around at 8 a.m. local time in the Shashdarak area of the city, where the US embassy and Afghan government buildings are located, prompting journalists to rush to the scene.

In a statement issued via the social media app Telegram, ISIS said a "martyrdom brother" blew his explosive vest up among a group of "apostates" and killed and wounded a number of them. The group named the first bomber as Qaqaa al-Kurdi and the second attacker as Khalil al-Qurshi. ISIS did not provide any evidence for the claim.

Eight journalists, including at least one woman, died in the blasts, according to Sharifi.

SharifiIn a tweet Monday, AFP's Global News Director, Michele Leridon, honored Marai for his "extraordinary strength, courage and generosity" and praised his "consummate professionalism" and "sensitivity" during his 15 years covering the Afghan conflict for the news agency.

AFP said the death of its "treasured colleague" Shah Marai in Monday's twin blast in Kabul was "a devastating blow".

Leridon sent "condolences to the families of other journalists killed in this terrible attack".

A further 45 people were injured in the two incidents, and have been taken to city hospitals, according to Ministry of Public Health spokesman Wahid Majroh.

The agency said Marai joined AFP as a driver in 1996, the year the Taliban seized power, and in 2002 he became a full-time photo stringer, rising through the ranks to become chief photographer in the bureau.

AFP Global News Director Michele Leridon released a statement on the death of the long-serving photographer.

"This is a devastating blow, for the brave staff of our close-knit Kabul bureau and the entire agency. Shah Marai was a treasured colleague who spent more than 15 years documenting the tragic conflict in Afghanistan for AFP."

He leaves behind six children, including a newborn daughter, AFP said.

In an essay entitled "When Hope is Gone," written in 2016 -- before the birth of his sixth child -- he acknowledged the danger of living in the city with his young family.

"I don't dare to take my children for a walk. I have five and they spend their time cooped up inside the house.

"Every morning as I go to the office and every evening when I return home, all I think of are cars that can be booby-trapped, or of suicide bombers coming out of a crowd. I can't take the risk."

The site of the explosion was close to NATO's Afghan headquarters, the US embassy and Afghan government buildings, including the Presidential palace, the Defense Ministry and the headquarters of Afghanistan's intelligence services.

"I condemn today's terrible Kabul attack (and) reaffirm our commitment (to) stand with the Afghan people in their fight for peace (and) security across Afghanistan. We mourn for those murdered, including the brave journalists who stand for truth in the face of violence," he wrote on Twitter.

A few hours after the strikes in Kabul, an attack in Kandahar Province killed 11 students at a local religious school. The suicide bomber had targeted a convoy of Romanian soldiers. Five of them were injured in the blast.

No group has yet claimed responsibility.

Afghanistan has witnessed a spate of attacks in recent weeks. Days ago at least six people were killed, including two Afghan soldiers, when a car bomb exploded in Afghanistan's southern Helmand province.

On April 22, a suicide blast killed 57 people -- including at least five children -- and wounded over 100 more at a voter registration center. That attack was preceded by a car bombing in southern Afghanistan in which at least 13 people were killed and 35 others injured.

The incident took place outside a sports stadium in Lashkar Gah, the capital of Helmand province. A wrestling match was taking place inside the stadium at the time of the attack.

The uptick in violence comes despite reports around six weeks ago that suggested some factions of the Taliban had expressed interested in pursuing peace talks with the Afghan government.

Those reports came on the heels of an Afghan government announcement in February that it would be willing to recognize the Taliban as a legitimate political party as part of a potential ceasefire agreement with the Islamist militant group.