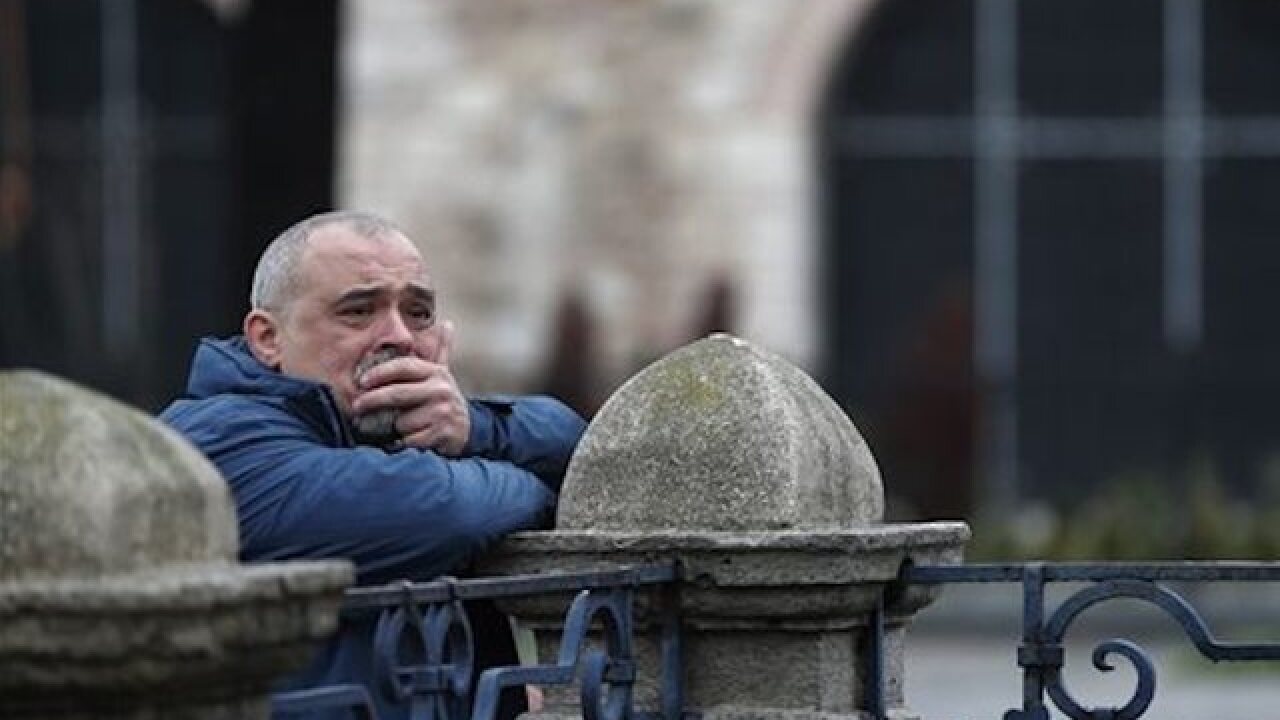 Copyright Associated Press
Lefteris Pitarakis
<p>A man watches the site of Tuesday's explosion in the historic Sultanahmet district in Istanbul, Wednesday, Jan. 13, 2016. A suicide bomber detonated a bomb in the heart of Istanbul's historic district on Tuesday morning, killing 10 foreigners - most of them German tourists - and wounding at number of other people in the latest in a string of attacks by Islamic extremists targeting Westerners. (AP Photo/Lefteris Pitarakis)</p>

ISTANBUL (AP) — Turkish police have arrested one person suspected of having a direct link to the deadly suicide bombing that killed 10 Germans in Istanbul's main tourist area, officials said Wednesday.

More than a dozen other suspected IS militants were detained in other parts of the country, but they don't appear to be tied to Tuesday's attack just steps from the Blue Mosque in the historic Sultanahmet district.

The suspect with a link to the attack was detained in Istanbul late Tuesday, Interior Minister Efkan Ala said during a news conference with his visiting German counterpart. He didn't provide further details, including whether the suspect was considered to be a key participant.

Turkish media reports said police had raided a home in an affluent Istanbul neighborhood, detaining one woman suspected of having links to the Islamic State group, although it wasn't clear if she was the suspect Ala was referring to.

Turkish authorities have identified the bomber as a Syrian born in 1988, who had recently entered Turkey, and officials say he had IS links. The Islamic State group, however, hasn't claimed responsibility for the attack. Turkish media, including newspapers close to the government, identified the bomber as Nabil Fadli, and said he was born in Saudi Arabia. Ala said the suicide bomber wasn't on any Turkish or international watch lists for IS militants.

The blast would be the first by IS to target Turkey's vital tourism sector, although the militants have struck with deadly effect elsewhere in the country.

On Wednesday, Turkish police also arrested 13 suspected IS militants, including three Russian nationals. But it wasn't clear if those arrests were directly linked to the Istanbul bombing.

The attack, which also wounded 15 other people, including Germans, a Norwegian man and a Peruvian woman, was the latest in a string of attacks by Islamic extremists targeting Westerners. Officials initially said that at least eight Germans were among the dead in Tuesday's explosion. On Wednesday, German Foreign Ministry spokeswoman Sawsan Chebli said the number had risen to 10.

German Interior Minister Thomas de Maiziere said there was no sign that Germans were specifically targeted.

"According to the investigations so far, there are no indications that the attack was directed specifically against Germans, so there can't be any connection to our contribution to the fight against international terrorism," de Maiziere said.

Germany committed Tornado reconnaissance jets to the military effort against the Islamic State group in Syria following the November attacks in Paris, and started flying missions from the Incirlik air base in Turkey last week. It also sent a tanker aircraft, as well as a frigate to help protect a French aircraft carrier in the eastern Mediterranean. It hasn't taken a direct combat role, however. Germany already was helping supply and train Kurdish forces fighting IS in northern Iraq.

Ala urged Turkish citizens and foreign visitors to go about their daily lives, insisting that the country had taken "all necessary security precautions." He said Turkey had detained as many as 220 IS suspects in the week prior to the attack.

De Maiziere said: "I see no reason to refrain from traveling to Turkey." He added there was no reason for people who are already there to break off their trips.

Top German and Turkish officials already were scheduled to meet in Berlin next week to discuss Europe's migrant crisis, in which Turkey — which borders both Syria and the European Union — is a key player. De Maiziere said those talks will now also address "the determined fight against terrorism."

"If the terrorists aimed to destroy or endanger the cooperation between partners, then they achieved the opposite," de Maziere said. "Germany and Turkey are coming even closer together."

The Russians were detained in the Mediterranean coastal city of Antalya, a popular destination for tourists. The state-run Anadolu Agency said the suspects were allegedly in contact with IS fighters in conflict zones and had provided logistical support to the group. Ten other people were detained in Turkey's third largest city, Izmir, and in the central city of Konya.

Nearly 3,000 Russians, mostly from the predominantly Muslim North Caucasus, are believed to have gone to fight alongside IS militants in Syria. Families of IS recruits and human rights activists in the Caucasus have described Turkey as the main gateway to Syria for Russian fighters. Some IS fighters of Russian origin are believed to have left the IS to settle in Turkey, families say.

The impact of Tuesday's attack, while not as deadly as two others last year, was particularly far-reaching because it struck at Turkey's $30 billion tourism industry, which has already suffered from a steep decline in Russian visitors since Turkey shot down a Russian warplane near the Syrian border in November.

Many of the victims appeared to be German couples.

The state government in Brandenburg said a couple aged 71 and 73 from Falkensee, outside Berlin, were killed, while authorities in the western state of Rhineland-Palatinate say a couple from there were killed — the husband was 61 and the wife 59. In addition, a 73-year-old man from the region was among the dead while his wife was seriously injured. The western state of Hesse said a 67-year-old man from that region was killed and his 50-year-old wife wounded.

"With you in our hearts," the Haber Turk newspaper read. "Your pain is our pain" Vatan newspaper said.