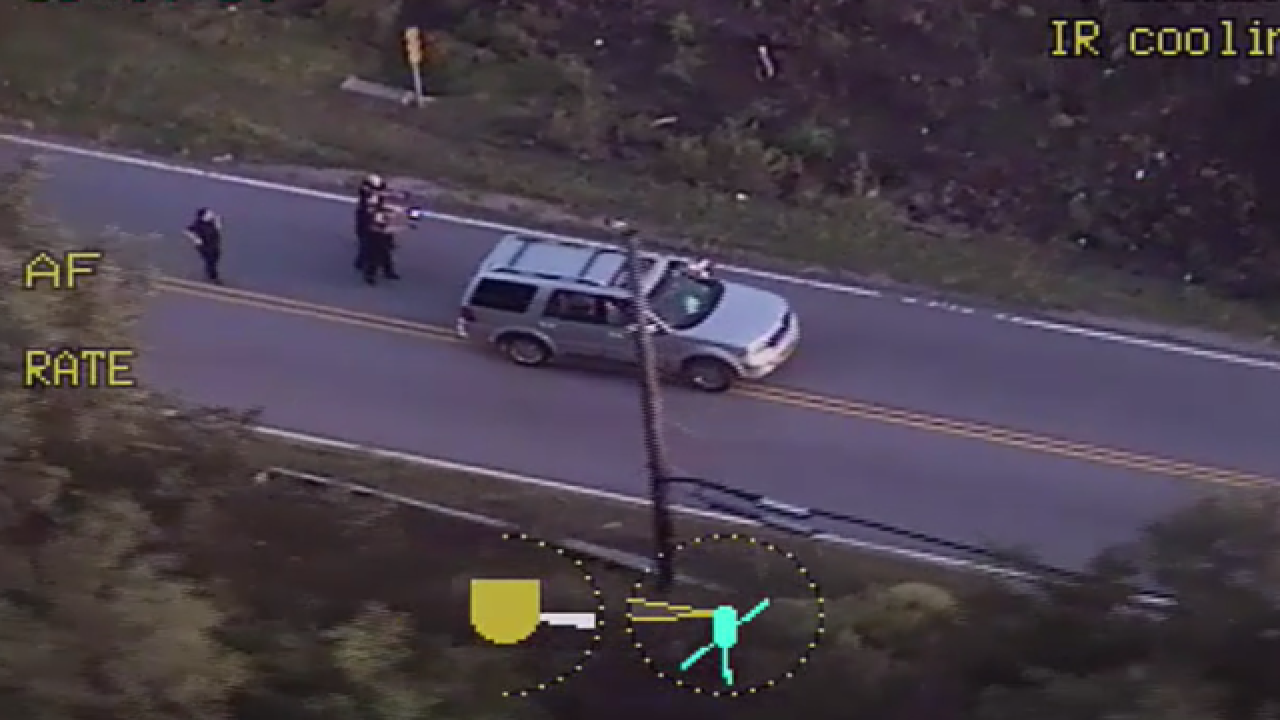 TULSA - Records show the incident that led to the fatal shooting of 40-year-old Terence Crutcher began with two anonymous calls to 911.

The time of the calls was not provided, but police released recordings of two women reporting an abandoned vehicle on North 36th Street near North Lewis Avenue

Caller: “And he just left it. I think he’s smoking something.”

7:36 p.m. - A call came into dispatch about an abandoned vehicle at 36th St. North and Lewis Ave. It was described as a tan SUV still running in the middle of the street with the doors open.

7:41 p.m. -  Dispatch recordings show Officer Shelby came across an abandoned vehicle at 2300 E. 36 St. N. and called for backup. During a press conference on Monday, Tulsa Police Chief Chuck Jordan said Shelby informed dispatch she was not getting cooperation from the driver.

At the press conference on Monday, Jordan said Turbough deployed his Taser and Officer Betty Shelby fired her gun.

7:43:57 p.m. - Dash camera recording shows Dunn arriving on the scene and parking behind Turnbough's vehicle. Dunn runs toward the scene.

7:44:20 p.m. - Helicopter video shows a pilot saying, "Alright, Betty Jo, where you at?" The camera hovers above two police officers with weapons drawn. Crutcher walks toward his SUV with his hands in the air.

A police spokesperson confirmed to 2 Works for You Shelby's husband is a police helicopter pilot. She could not say which of the two voices in the helicopter recording was his.

7:44:26 p.m. - Helicopter video shows a pilot voice saying, "He's got his hands up for her now." The video shows Crutcher walking away from Shelby with his hands in the air. Shelby has her gun pointed at Crutcher.

The helicopter camera shows two more officers running toward Crutcher and his vehicle.

7:44:13 p.m. - Dash camera video from Officer Turnbough's vehicle shows a voice on the radio asking, "Which direction is he facing?" Simultaneously, Crutcher hits the ground.

"They're facing westbound. I think he may have just been Tasered."

7:44:13 p.m. - Dash camera video from Dunn's vehicle shows Crutcher going down in the glare of headlights.

"Adam 321, we have shots fired. We have one suspect down. We need EMSA here."

7:44:44 p.m. - Dash camera video from Turnbough's vehicle shows four officers backing away in a cluster from the SUV and Crutcher's body. A patrol car pulls in next to the SUV, then drives around the front of it. Crutcher's body can been seen on the driver's side of the SUV.

7:44:56 p.m. - Dash camera video shows Officer Dunn running back to the vehicle, then driving to the front of the SUV to block traffic. Crutcher's body can be seen when the car parks.

7:45:20 p.m. - Dash camera video from Turnbough's vehicle shows a voice on the radio request EMSA "if we haven't already."

7:45:41 p.m. No sound, male officers appear to be comforting a female officer.

7:45:43 p.m. - Dash camera video from Turnbough's vehicle shows a female officer run from the front of the SUV toward Crutcher's body, observing from several feet away. Two officers stand several yards behind the SUV.

7:46 p.m. - Dash camera video from Turnbough's vehicle shows a voice asking if anyone has cleared the vehicle yet.

7:46 p.m. - Helicopter video shows a female officer walking past the passenger side of the SUV. No radio sound.

7:46:04 p.m. - Dash camera video from Turnbough's vehicle shows the female officer who approached Crutcher at 7:45:43 bends over and pulls his right arm, then appears to check his pockets.

Voice 2: "Hopefully they cleared that car. I didn't see anybody necessarily looking all up in the car.

Voice 1: "I don't know. Police 1, has anybody cleared the vehicle yet?"

Voice 2: "Okay I've got two officers kneeling down back here."

The helicopter hovers toward the front of the SUV. An officer can be seen lifting Crutcher's arm.

7:46:46 p.m. - Officer Dunn's dash camera shows four officers around Crutcher's body. They bend over and make physical contact with him.

7:48:14 p.m. - Officer Dunn's dash camera shows a voice on the radio saying, "We are secure. And we need a tactical. And go ahead and start me Crime Scene, and an on-duty captain."

7:50 p.m. - Officer Dunn's dash camera shows a female voice on the radio saying, "Hey, anybody else heading this way can slow down [inaudible]."

Download our free app for  Apple  and  Android  and  Kindle  devices.

Sign up for  newsletters emailed to your inbox.  Select from these options: Breaking News, Severe Weather, School Closings, Daily Headlines and Daily Forecasts.