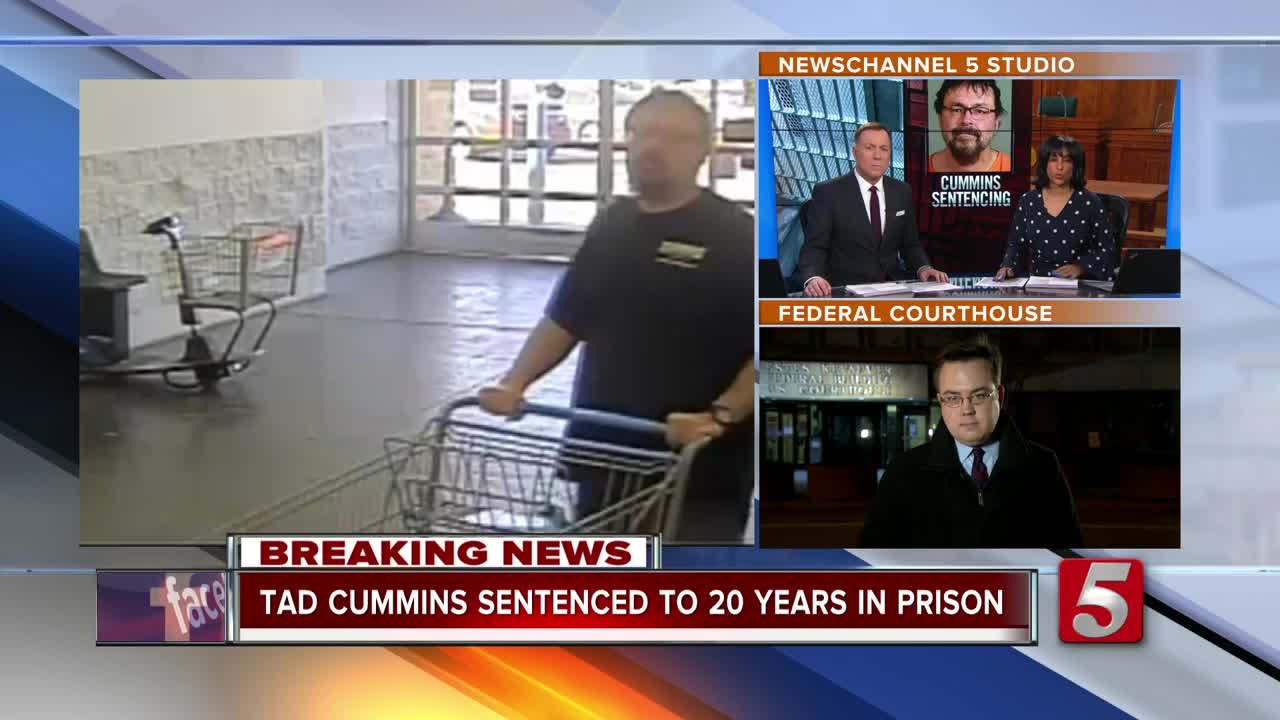 A former Maury County teacher who admitted to kidnapping a student, which prompted a nationwide manhunt in 2017, has been sentenced to 20 years in prison with lifetime supervision. 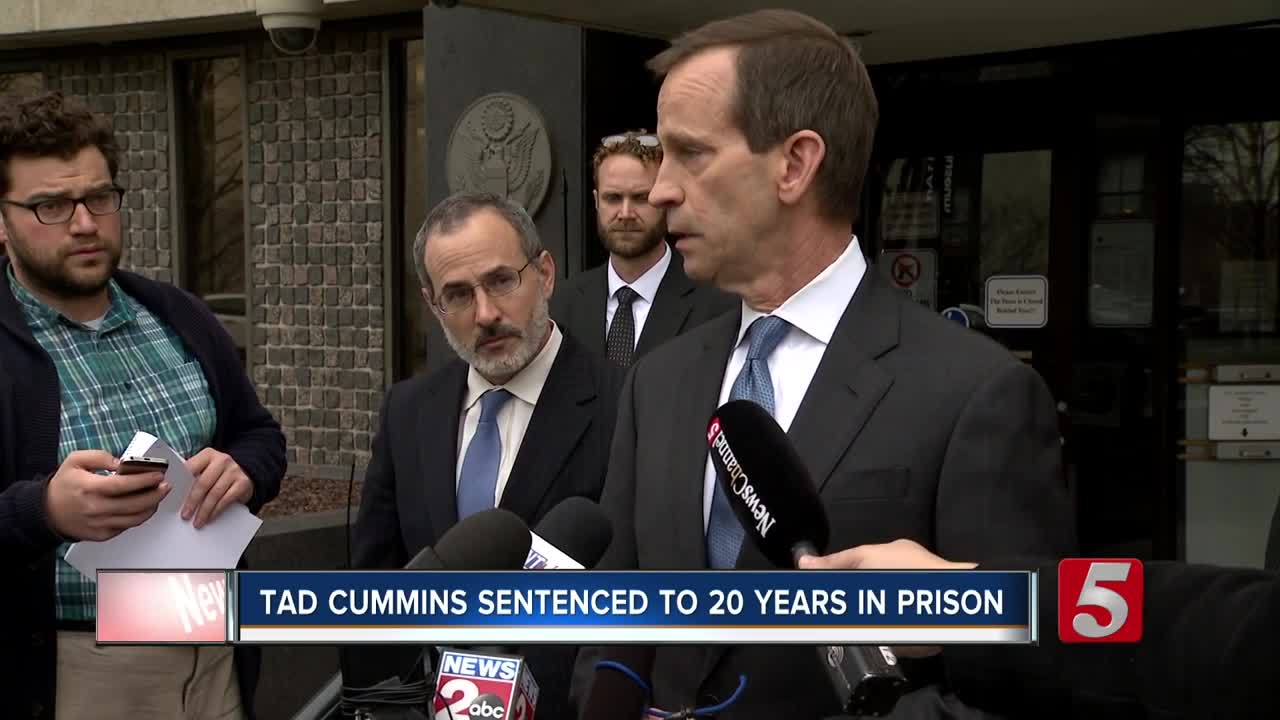 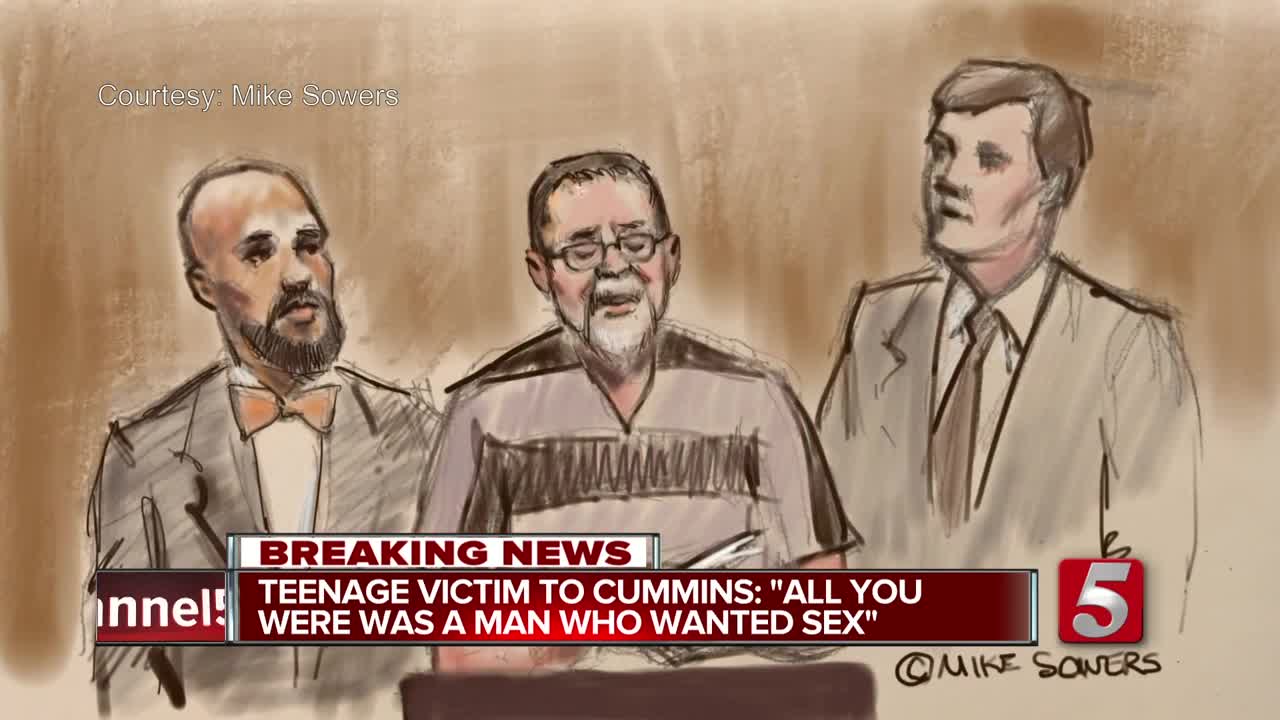 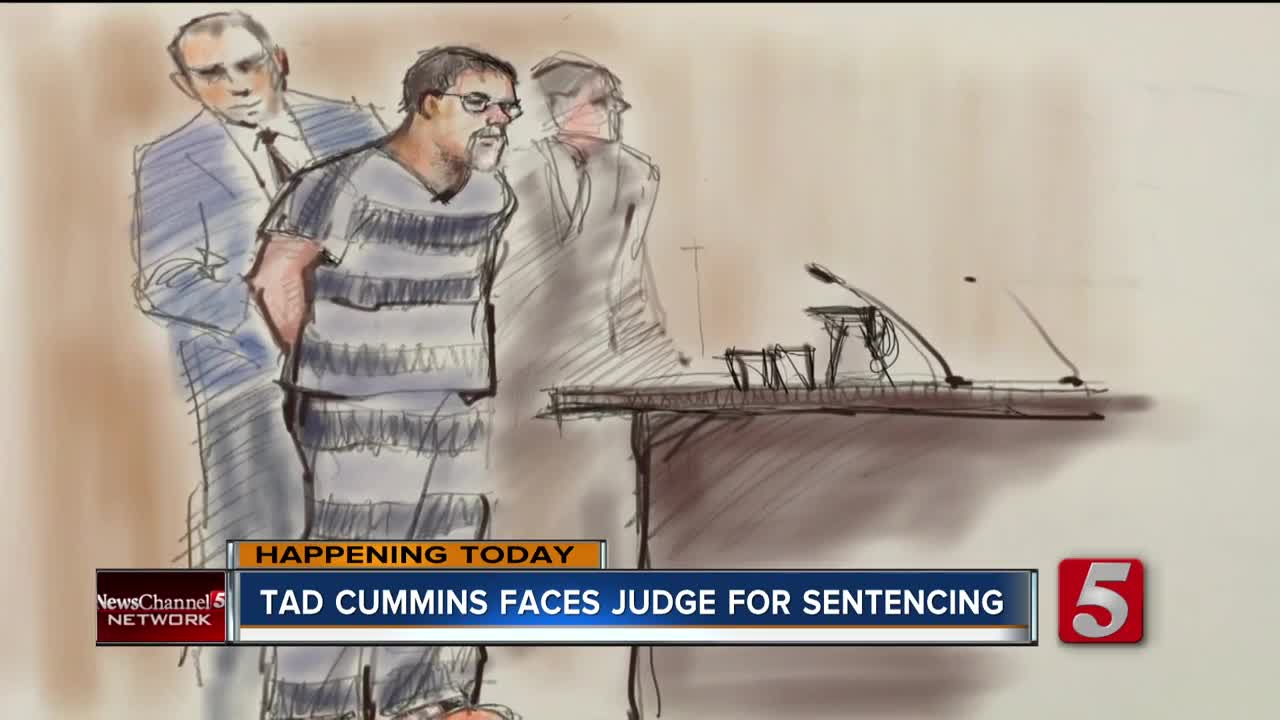 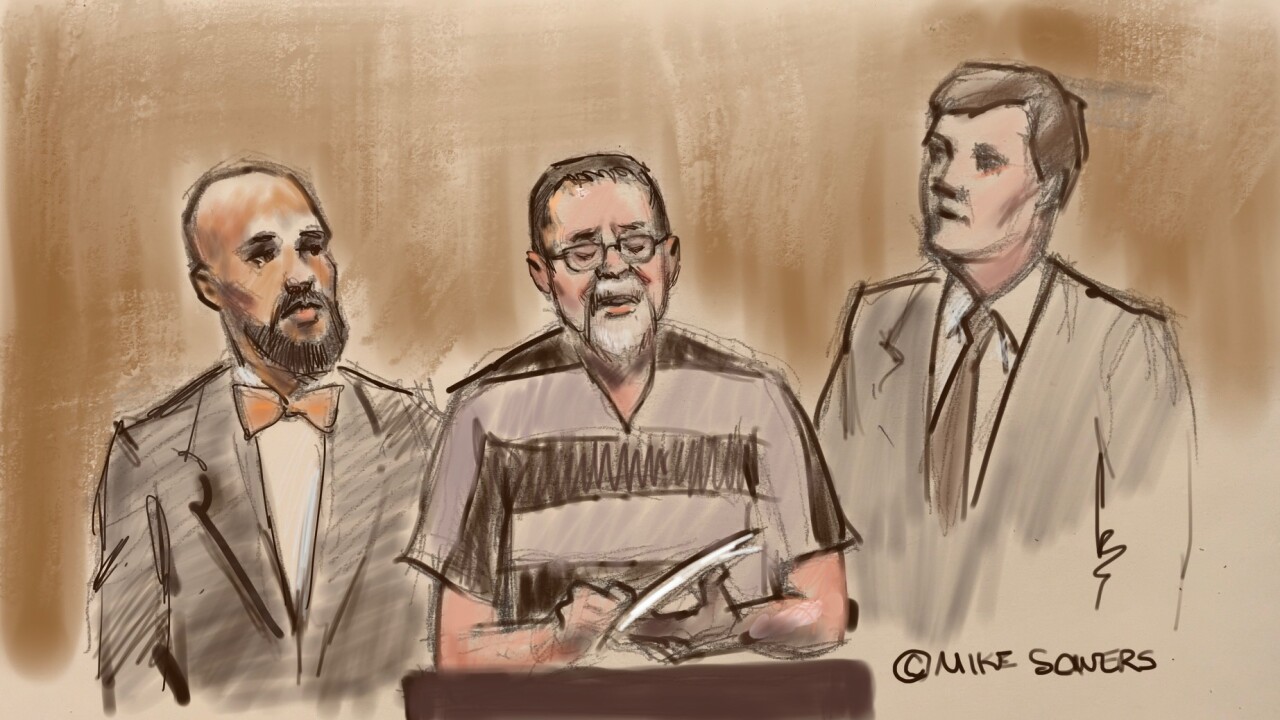 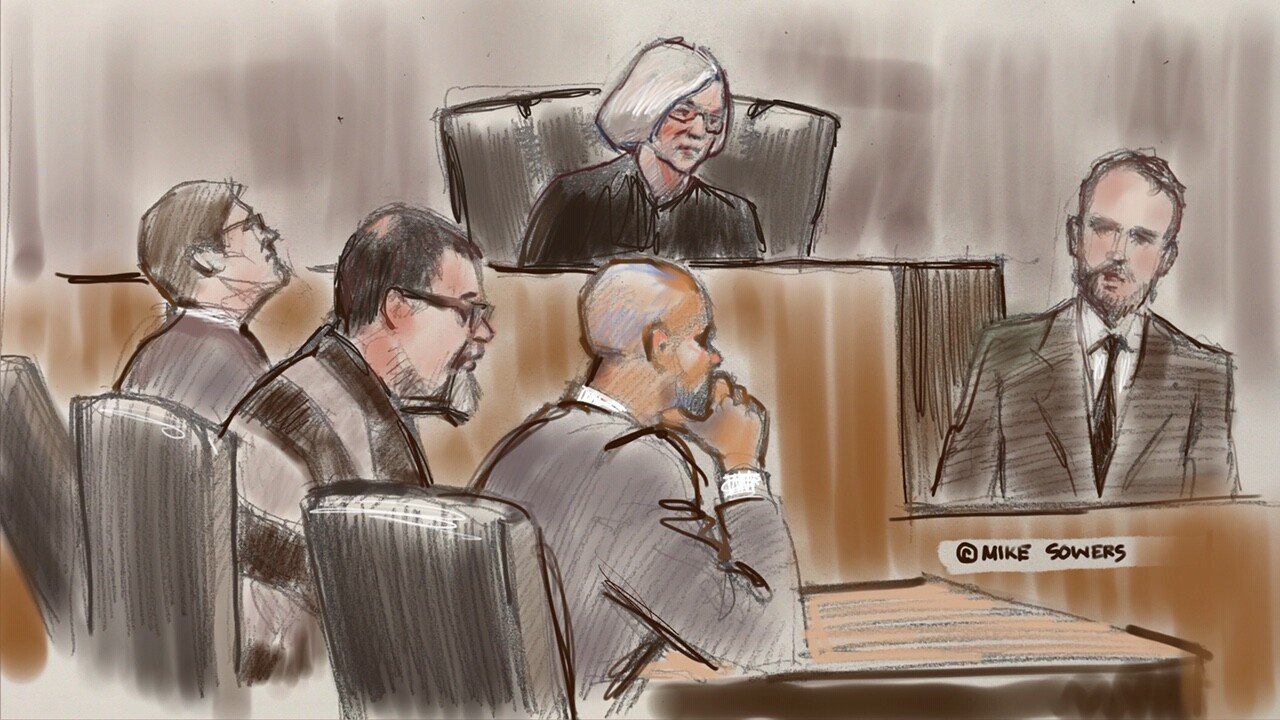 A former Tennessee teacher who admitted to kidnapping a student, which prompted a nationwide manhunt in 2017, has been sentenced to 20 years in prison with lifetime supervision.

Tad Cummins appeared in federal court Wednesday, where he faced a mandatory minimum of 10 years in federal prison. However, prosecutors pushed for a 30-year sentence.

Cummins was a teacher at Culleoka Unit School in Columbia, Tennessee when officials said he fled the state with a 15-year old-student with the intention of having sex with her.

Cummins was the subject of a nationwide search by law enforcement after leaving the Columbia area on March 13, 2017. Cummins was initially charged in a criminal complaint on April 20, 2017, after he was found in Cecilville, California with the 15-year-old victim.

He was later charged with transporting a minor across state lines to engage in sexual conduct and obstruction of justice.

Cummins walked into Wednesday's sentencing hearing wearing shackles and a gray and black jumpsuit. He mouthed "hi" and waved to family and supporters sitting in the crowd as he walked in.

"This is a case of a vulnerable little girl who trusted somebody she thought was a special teacher but turned out to actually be a sexual predator," U.S. Attorney Don Cochran said following the sentencing.

His victim also sat in the crowded courtroom. She was supposed to make a statement, but when that time came, she started sobbing and didn't say anything through the tears. After a few minutes, Assistant U.S. Attorney Sarah Beth Meyers read the statement for the victim.

"It's an emotional time to come face-to-face with a perpetrator like that so it's perfectly understandable. Sarah Beth did a good job reading her statement. Those were her words, what she had to say she felt she had been betrayed by somebody she trusted who turned out to be a predator who used her, and so we understand the strain she was under," Cochran said.

Read the victim's entire statement below:

"It is very difficult for me to stand here and fully describe the impact that Mr. Cummins’ crimes have had on my life. The effects have been devastating and permanent, and they are not over. They are still an ongoing struggle that I experience one day, and sometimes even one moment, at a time in my life. Mr. Cummins, what you did to me is unspeakable. I don’t know that any words could ever accurately express how much pain I have suffered and continue to suffer because of you. When I started school, you picked me out of the crowd. I was just a kid who wanted to make friends, but you were someone who had a plan. You saw a broken girl, who was lonely, scared, and traumatized. You made her feel safe and loved because you saw what she needed and made her believe you would be her “protector.” I was at a point in my life where I needed to be protected the most. And when it came down to it, that was all a part of your plan. All you were was a man who wanted sex, and you manipulated me and used me just for that. I don’t know if you have ever taken or could ever truly take responsibility for those actions. First, you said I was to blame. Then, you said the devil made you do it. But if that’s true, then you are the devil. Your choices were yours and yours alone. A 17-year-old girl should not have to tell a 52-year-old man this, but choices have consequences. Your choices destroyed not just my family, but also yours. You act like you care now and that you’re full of all this regret, but where was any of that before? Where was any of that when you first had me alone in your classroom and told me you wanted to see me naked? Where was any of that when you directed me into your classroom closet and violated me over and over again for months? Where was any of that when you spend untold amounts of time and effort into manipulating, pressuring, and deceiving me into thinking that you were the only person who cared about me? Where was of that when I told you I was depressed and wanted to see a therapist, but you talked me out of it? Where was any of that when you convinced me to get in the car with you on March 13, 2017? Where was any of that when you made me sleep without my clothes on? Where was any of that when you made the decision to keep me away from my home and my family not once, not twice, but for 38 straight days? It is convenient that you only say you’re sorry now, while sitting in a courtroom, in front of a judge who is about to sentence you. But the truth is, no matter how much time you have to serve, you’ll never be able to undo what you did to me. You may someday have the luxury of moving past it, but I never will. I will have to live with the scars you left on me forever. You preyed upon a vulnerable girl and robbed her childhood. For the last two years, I’ve been picking myself up, piece by pice, and proving to myself that I am much, much stronger than you convinced me I was. I choose to surround myself with people who pick me up, who cherish me, and who truly love me. Because of that, I’m able to stand here today, face you, and tell you that you don’t have the power over me that you used to have. You can’t hurt me anymore. I really hope that no matter what happens today, you learn from your actions. You did this. No one made you. No one influenced you. I hope the court is able to see the truth about Tad Cummins. This is not a man who has the convenient opportunity of using a troubled upbringing, bad relationships, or poor mental health as excuses for his actions. Mr. Cummins was a man who could have had anything he wanted in life. He had a good career, a family who loved him and a community who admired him. But Mr. Cummins is also a man who craved power and control. He is a man whose needs came first to him. Mr. Cummins always made it clear that if anyone found out what he was doing to me, everyone would take his side and no one would believe me. He could have had anything in life and he chose to be a sexual predator. He chose to prey on me, knowing the problems I had in my home life, and he convinced me that I was weak. He chase to belittle me, degrade me, and abuse me. There is no doubt in my mind that if Mr. Cummins had never been caught he would have eventually discarded me like a piece of trash and made another impressionable young woman his next chosen victim. Tad Cummins is a sick disgusting criminal. I believe Mr. Cummins’ sentence should be 38 years in prison - one year for each day he kept me away from my family. Thank you."