George H.W. Bush's former service dog Sully has a new job with the US Navy 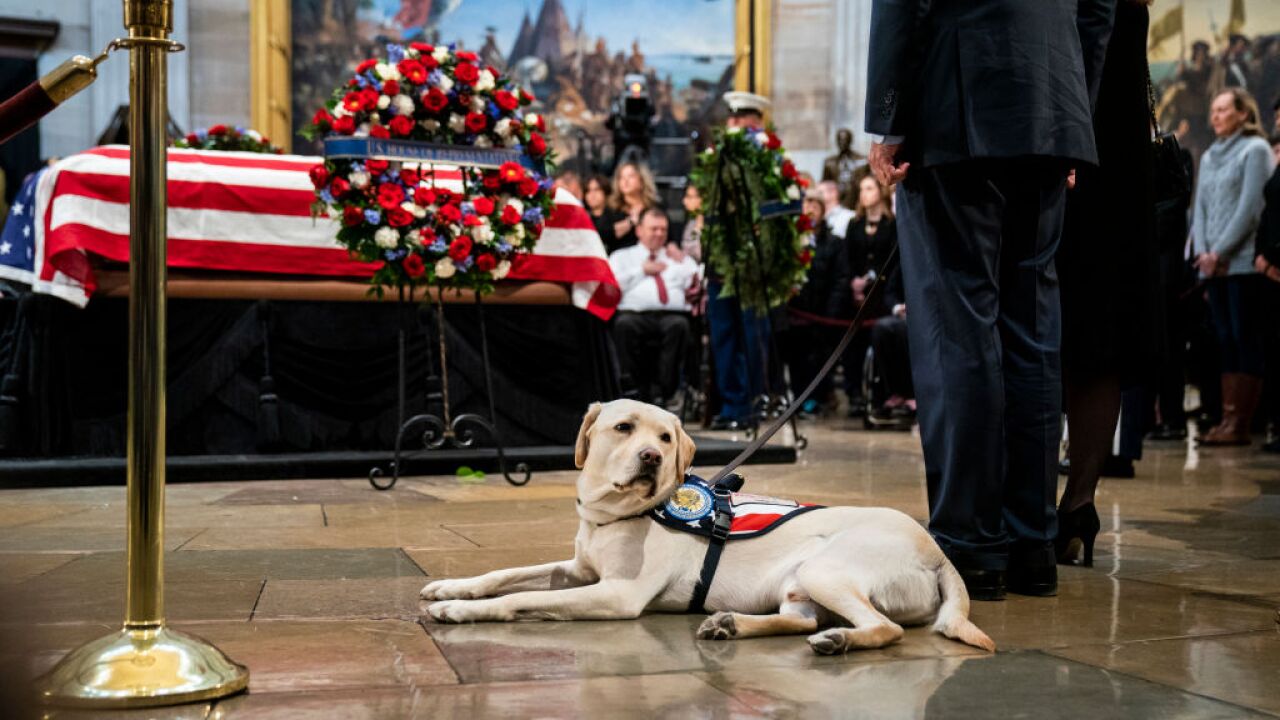 During a ceremony streamed live on Facebook Wednesday, the yellow Labrador was appointed to the rank of hospital corpsman second class.

"Your appointment as a petty officer in the United States Navy makes you heir to a long and proud tradition of naval leadership," said a Navy spokesman at the Bethesda, Maryland, ceremony. The dog then was outfitted with a new "military uniform" -- a vest representing the medical center's dog team.

Sully's personalized oath of enlistment: "Do you affirm or pant as a hospital corpsman in the United States Navy that you will support, comfort and cure warriors and their families, active duty and retired? That you embrace our staff and bear unconditional love and solace, especially on busy days? That you take this obligation freely, without any promise of treats or tummy rubs and that you will faithfully discharge the duties to provide joy, love and nurturing for our soldiers, sailors, airmen, Marines, and sailors and their families?"

Sully joins the medical center's facility dog program. His duties will include reducing stress and increasing well-being among patients and staff.

The dog captured hearts last year after a photo went viral of Sully resting near President Bush's casket at the US Capitol.

Named after Chesley "Sully" Sullenberger , the pilot who safely landed US Airways Flight 1549 in New York's Hudson River, Sully was assigned to President Bush through a request on his behalf after the passing of former First Lady Barbara Bush.

"When we received the request for President Bush, we knew we needed to find a dog that was super adaptable, because the President did a lot of traveling and got a lot of visitors," Brad Hibbard, chief program officer at Guide Dog Foundation for the Blind/America's VetDogs, told CNN last year.

"We immediately thought of Sully. We knew he was the right dog for the job, especially with Mr. Bush being older and in a wheelchair. He needed a dog that would also help him with daily tasks."

Trained by America's VetDogs -- a non-profit organization that trains service dogs for disabled military veterans and first responders -- to be a service dog, therapy dog and guide dog, Sully is capable of doing a number of tasks, from answering phones to turning lights on and off.

"Not only is he good at retrieving things, he helped the President by opening doors, knew when to get assistance from someone else, and knew when Bush needed comfort, so he would place his head on his lap," Hibbard said .

The service dogs at Walter Reed in Bethesda collectively work over 200 hours per month and average 2,500 contacts, according to a spokesperson for for the facility.