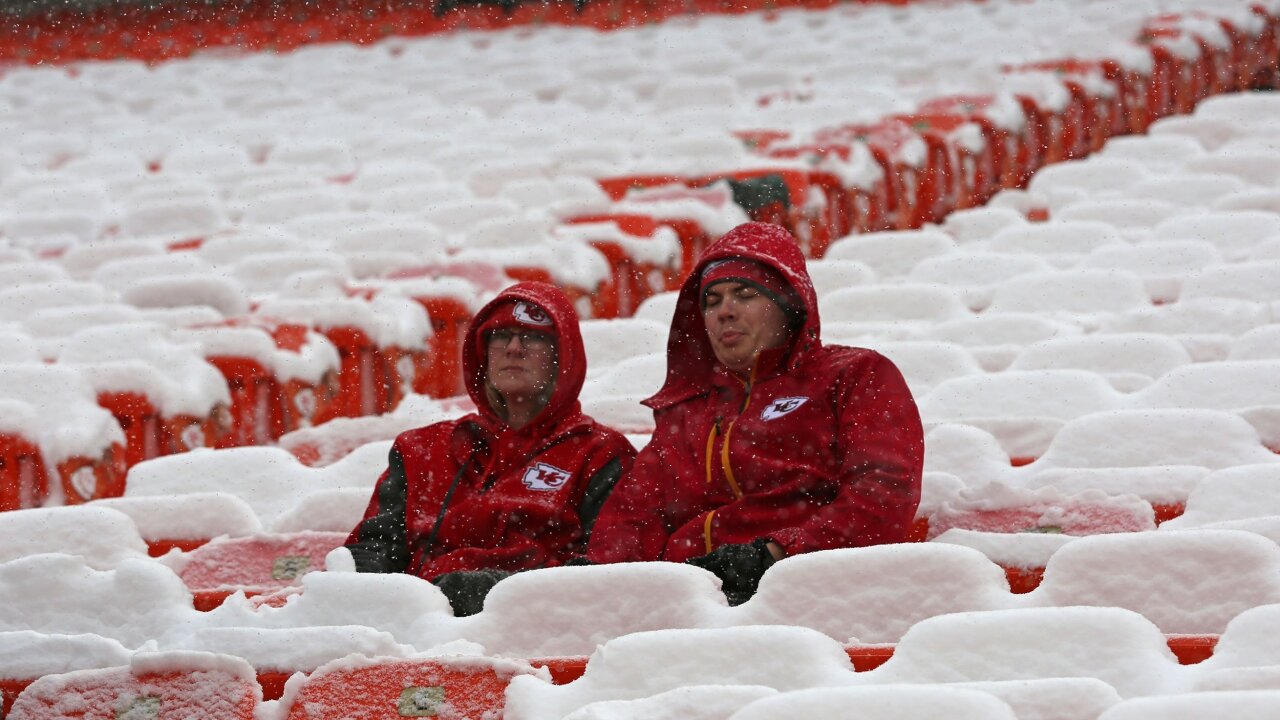 See caption/See caption
Fans sit in the cold and snow before an AFC Divisional Round playoff game game between the Indianapolis Colts and Kansas City Chiefs on January 12, 2019 at Arrowhead Stadium in Kansas City, MO. **Crecdit: Scott Winters/Icon Sportswire via Getty Images**

(CNN) -- Die-hard Kansas City Chiefs fans did not let a little snow get in the way of their football.

The snow is falling steadily, but hot dogs are grilling and fans are tailgating just like any other weekend at Arrowhead Stadium in Kansas City, Missouri.

The Chiefs are facing off with the Indianapolis Colts on Saturday afternoon in the divisional round of the NFL playoffs.

The temperature is hovering at the freezing mark and there are 7 inches of snow on the ground. But the cold isn't scaring away the fans who are there for such a pivotal game.

The seats inside the stadium are blanketed in snow, making for a wet, cold sit for the fans inside -- but they aren't bummed.

Tailgaters are flocking outside, wearing Chiefs hats and scarves, and jerseys and team jackets over layers. Pete Cervantes and dozens of others like him are cooking and cheering outside the stadium.

Cervantes at least has the cover of a tent, but others are out there without one, keeping warm next to the flames roaring on their grills.

Jaime Gallaway has been a Kansas City Chiefs fan her whole life and was finally able to get season tickets this year, she said.

"There is no way I'd miss this game in any weather," she told CNN on Saturday.

A snowman in the stadium parking lot was dressed in the jersey of Chiefs quarterback Patrick Mahomes and surrounded by team flags.

And those who aren't at the game are finding creative ways to cheer on their home team.

"My husband showing his team spirit while shoveling snow this morning. Let's go Chiefs!!" wrote Courtney Hill on Facebook. Her husband shoveled the Chiefs' arrowhead logo out of snow in their driveway on Saturday in Lee's Summit, Missouri. And yes, they planned to watch Saturday's game.

But Colts fans weren't letting the Chiefs have all the fun. There's plenty of snow to go around. A photo on Twitter showed two young fans posing with a giant snowman, decked out in his finest Colts gear.