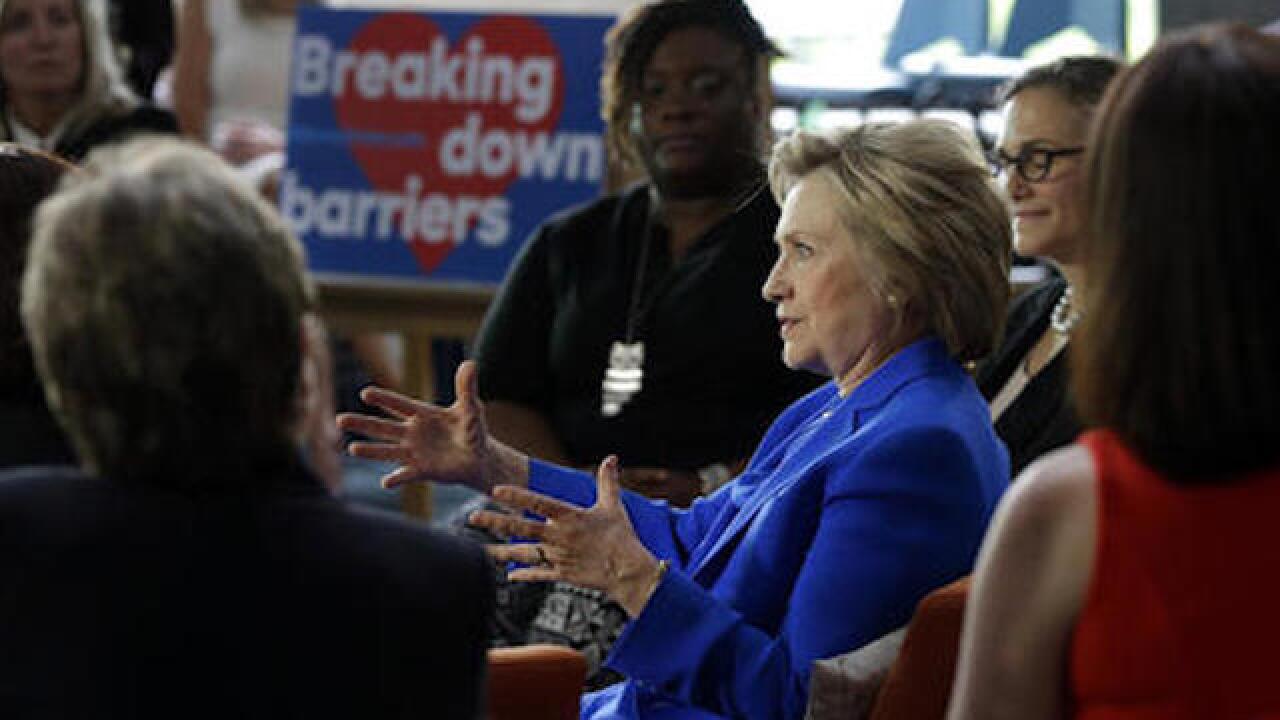 Voters in West Virginia and Nebraska are casting primary ballots on Tuesday, but the only competitive presidential race that remains in the Democratic contest in West Virginia.

With Nebraska's Democrats having caucused in March — giving Bernie Sanders a comfortable win over Hillary Clinton — the state's Republicans went to the polls Tuesday with their party's presidential race all but sewn up by businessman Donald Trump. Voters must decide several other races, though, including the Republican contest to pick a challenger to U.S. Rep. Brad Ashford, who is running for re-election to his seat that represents the Omaha area.

In West Virginia, the headline race is between Clinton and Sanders, with Trump having cleared the GOP field of rivals in Indiana last week. West Virginians are also voting in a Democratic showdown for governor, a state Supreme Court race and other contests.

Here are some voters' thoughts:

Democrat Christopher Blackmon, a 31-year-old social worker from Charleston, West Virginia, said he is voting for Clinton because he thinks her views are more realistic.

"With all the politicians and everybody that's running, to be honest, I don't believe with everything that they all say," Blackmon said. "But when you have this choice, it's one of those things where you've got to pick the lesser of the evils, in a sense."

He said Bernie Sanders is almost trying to make everything like the "Garden of Eden."

Dave George, 47, said he voted for Republican Ted Cruz in Lincoln, Nebraska, even though Trump has effectively won the nomination. George said he wanted to make a statement against Trump with his vote.

"The man's a pig," George said outside his polling place at the Belmont Recreation Center in Lincoln. "He's a terrible human being. He's a megalomaniac, and I'm absolutely astonished he's made it to this point."

George said he was "incredibly" frustrated that the GOP primary was over by the time Nebraska's election arrived. He said he feels that moderate voices are being overshadowed, and he plans to vote for a write-in or third-party candidate in November.

"The only candidate still in the campaign is Trump, and he's a caricature," George said. "This is ridiculous."

Brad Rhodes, of Lincoln, said he voted for Cruz because he sees him as a more ethical person than Trump. The 61-year-old said he generally votes Republican, but will vote for Clinton in November if Trump is the only Republican on the ballot.

"There's just so much controversy around him," said Rhodes, sitting in his pickup outside the Lincoln Air Park Neighborhood Center. "He doesn't seem to have a lot of nice things to say about women, Muslims and Latinos. He's definitely kind of a loose cannon. If he gets in, I can definitely see us going to war with Iran, North Korea or Russia."

Vicki Baines, who voted at Covenant Presbyterian Church in west Omaha, said she didn't feel great about her options in the presidential race because her favorite GOP candidates weren't even on the ballot.

"The people I related to didn't even make it to the top four," said Baines who didn't name her favorites.

Baines, 62, joked that she wrote in a fictional character for president that she could trust.

"I'm sticking with my man Pinocchio," she said.

Dorothy Burford, an 81-year-old retiree from Charleston, West Virginia, is a registered Democrat who says she voted for Hillary Clinton in 2008.

This year, she left the Democratic race for president empty because she wants to vote for Donald Trump in the fall.

She said the change dealt with how she thinks the candidates view the coal industry.

Carol Parsons, of Cross Lanes, West Virginia, said she voted for Trump on Tuesday, but not because he was her favorite candidate. Rather, the 70-year-old retiree called Trump "the lesser of two evils" compared to Clinton.

"I think in his heart, he has America's best interest," she said. "Because he's not a politician, he views things from a different viewpoint."

After voting at a polling place at Point Harmony Elementary School in her hometown, Parsons said this election is important because the next president will have a huge challenge. She said from foreign policy to problems at home, she believes "the United States is going to go down the tubes if something doesn't happen — all the way around."

Edward Milam, a retiree from Cross Lanes, said the voting lines at Point Harmony Elementary School were longer than he can recall.

A self-described socialist, the 68-year-old Milam said he voted for Clinton despite previously donating to Sanders' campaign.

"After about six-seven months of debating and watching, I think Hillary has a lot more to offer than Bernie, internationally," Milam said. "I think she handles herself well. I've known about her for 30 years just like everybody else has. I don't think there will be any surprises."

Kelli McKinney, a writer from Omaha, said she was disappointed that the Republican presidential contest was settled before Nebraska voted.

"It's hard to make your voice heard when it's all decided for you," McKinney said.

McKinney, 46, said she didn't vote for Trump, but instead backed one of the four GOP candidates whose names still appear on the ballot even though they have suspended their campaigns. She declined to say whom she backed, though. Regarding Trump, McKinney said: "I want my son and his generation to have someone to look up to, and he's not the guy."

McKinney said that in the 2nd Congressional District race, she voted for Republican Don Bacon because her husband knows him.

Ross Polking, a wealth manager from Omaha, said he wasn't bothered that the Republican presidential contest was settled before Nebraska voted because at least he wasn't subjected to the deluge of ads and the hoopla go with competitive campaigns.

Polking, 39, grew up in Iowa, where the early caucuses dominate the airwaves and conversation for weeks leading up to the winter gatherings.

He said it will be good for the party to have a chance to unify behind Trump.

Polking said he thinks Clinton will get the Democratic nomination and that he looks forward to her debates with Trump.

"We know who he is and who Hillary is," Polking said. "The debates will be must-see TV."