US waylaid by Costa Rica in World Cup qualifying 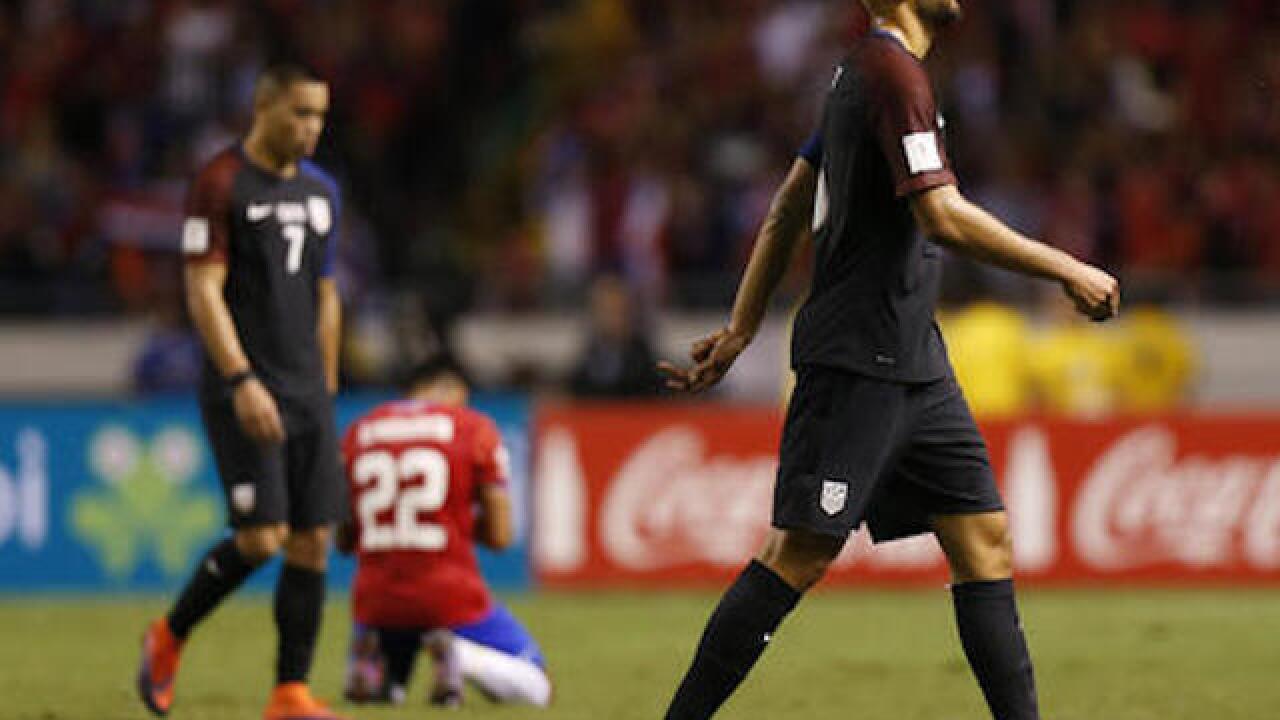 Only these players were Costa Ricans in red jerseys, not Brazilians in yellow or Italians in blue.

With one of its worst performances in decades, the United States put itself in a deep — but not insurmountable — hole in World Cup qualifying.

"There's going to need to be some urgency," U.S. captain Michael Bradley said after Tuesday night's 4-0 wipeout. "We're going to have to look collectively real hard in the mirror at ourselves and understand it's not been a good start. But the reality of this hexagonal format is that nothing is lost yet, not even close. So anybody who thinks that is sorely mistaken."

The U.S., which dropped to 0-2 in the final round of the North and Central American and Caribbean region for the first time, had not lost a qualifier by four goals since a 5-1 defeat at Mexico in November 1980 and had not dropped a shutout loss in a qualifier by that margin since a 6-0 rout at Mexico in April 1957.

"A very, very bitter moment for us. There's no doubt about it," said U.S. coach Jurgen Klinsmann, who called it "the defeat that hurts most" of his five-year tenure.

Costa Rica (2-0), a 2014 World Cup quarterfinalist, leads the hex with six points, followed by Mexico and Panama, both 1-0-1 following Tuesday night's 0-0 draw in Panama City. Honduras (1-1) has three points, and the U.S. is tied with Trinidad and Tobago.

Seeking its eighth straight World Cup berth, the Americans opened with a 2-1 loss to Mexico on Friday at Columbus, Ohio, their first home defeat in a qualifier since 2001.

The top three teams qualify for the 2018 tournament in Russia, and the No. 4 finisher advances to a playoff against Asia's fifth-place nation.

"Mexico qualified with 11 points," Gulati said, thinking back to the last hex. "There's a lot of points left on the board — 24 to be exact."

As the U.S. dropped to 0-9-1 in qualifiers at Costa Rica, jubilant Ticos fans sounded air horns at the end of a match that reignited questioning of Klinsmann's tactics. A former World Cup champion and coach with Germany, Klinsmann will be under perhaps the most scrutiny since he was hired.

He insisted he is the right person to lead the team.

"I obviously understand that when you lose two games and especially two World Cup qualifiers right after each other, that there will be a lot of your comments," he told reporters after the match. "That is just part of the job."

Qualifying resumes with a March 24 home game against Honduras followed by a match at Panama four days later. Gulati would not be drawn into a coaching discussion.

"We don't make any decisions right after games," he said. "We'll think about what happened today and talk with Jurgen and look at the situation."

There was some whistling during "The Star-Spangled Banner" from the capacity crowd of about 35,000 in Estadio Nacional, where the field is surrounded by an athletics track and crowd noise dissipates — even from a band in the second deck. The venue appears less intimidating to visitors than old Estadio Ricardo Saprissa, where fans were directly behind the benches.

Costa Rica went ahead after a giveaway by Brooks. Randall Azofeifa took a short pass from Jose Salvatierra in the center circle and played a long ball into the corner, where Bolanos ran it down on its third bounce. Gonzalez didn't close down Bolanos, who crossed for Venegas just outside the 6-yard box. Venegas beat Brooks to the ball and sent a header across Guzan.

Bolanos scored after a turnover by 18-year-old midfielder Christian Pulisic near midfield. Salvatierra sent a pass down the flank to Bryan Ruiz, and his cross found Bolanos in front, with Chandler a step late.

Ronald Matarrita created both of Campbell's goals, first sending a looping ball that Brooks misplayed into the path of the forward, who broke in alone and slotted the ball past Guzan from 16 yards. Then Matarrita lifted the ball from just past midfield as Campbell beat an offside trap by Brooks and Gonzalez, to break in alone again and follow with a second celebratory dance.

"At moments like this it does you no good to point fingers and to be looking around trying to figure out who you can throw under the bus," Bradley said. "Come March, there's going to be the need to go after things in a strong way so we can start to put things right."

Notes: Chandler and MF Jermaine Jones are suspended for the next qualifier because of yellow-card accumulation, both cautioned by Mexican referee for fouls against Ruiz. ... Honduras (2-0) beat visiting Trinidad and Tobago 3-1 on goals by Romell Quioto in the 16th, Emilio Izaguirre in the 19th and Eddie Hernandez in the 80th. Carlyle Mitchell scored in the 51st for the Soca Warriors (0-2).