U.S. moves ahead with oil leases near sacred park 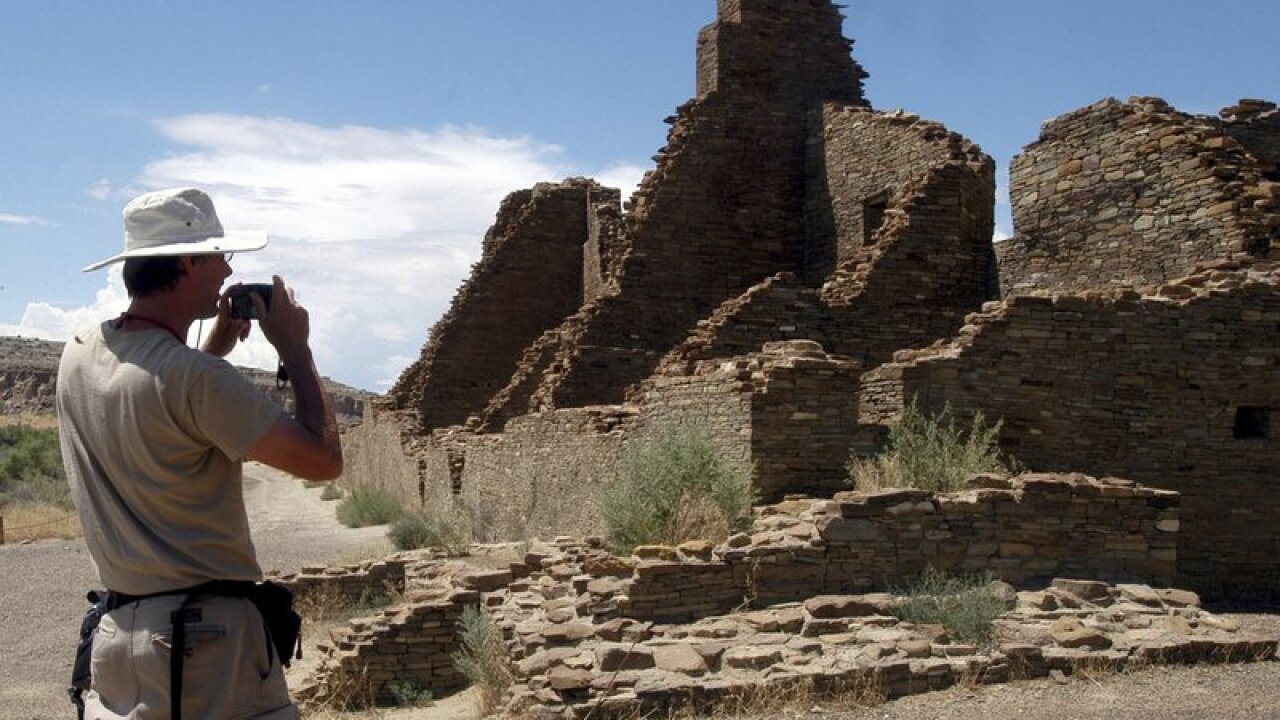 (AP Photo/Jeff Geissler, File)
In this Aug. 10, 2005, file photo, tourist Chris Farthing from Suffolks County, England, takes a picture while visiting Chaco Culture National Historical Park in northwestern New Mexico. The Bureau of Land Management has rescheduled an oil and gas lease sale for March 28, 2019, that includes several parcels that are within 10 miles of the park. The agency says the sale was pushed back to accommodate a public protest period that was delayed due to the recent government shutdown.

ALBUQUERQUE, N.M. (AP) — U.S. land managers will move forward in March with the sale of oil and gas leases that include land near Chaco Culture National Historical Park and other sites sacred to Native American tribes.

The sale comes as Democratic members of Congress, tribal leaders and environmentalists have criticized the federal Bureau of Land Management for pushing ahead with drilling permit reviews and preparations for energy leases despite the recent government shutdown.

With limited staff on duty over the last month, the critics complained that they were locked out of the process because the agency didn’t release any information about the sale. They also questioned whether the agency would be able to adequately review the land that’s up for bid and whether it would consider protests to the move.

U.S. Sen. Tom Udall told The Associated Press in an email that he’s concerned about the latest attempt to lease potentially culturally significant land in New Mexico without a more comprehensive plan in place.

“It’s a mistake that while critical public services were shuttered for 35 days during the government shutdown, BLM still moved forward with this opaque process,” the New Mexico Democrat said.

Agency spokeswoman Cathy Garber said officials decided to push back the lease sale by a couple of weeks to accommodate a public protest period that was delayed because of the shutdown. The agency quietly confirmed on its website that it would accept comments starting Feb. 11 and that the sale was scheduled for March 28.

Depending on the outcome of the protest period, it’s possible for the agency to withdraw the land in question, including nine parcels near Chaco, a world heritage site with massive stone structures, kivas and other features that archaeologists believe offered a religious or ritualistic experience.

In all, more than 50 parcels in New Mexico and Oklahoma will be up for bid.

“We cannot help but protest what appears to be an intentional bias in the favoring of oil and gas development over other interests,” former Acoma Pueblo Gov. Kurt Riley said last week during a congressional forum.

Riley and others said the shutdown exacerbated an already tense situation over the expansion of oil and gas development in northwestern New Mexico.

In recent years, land managers have declined oil and gas exploration on land within 10 miles (16 kilometers) of the park, creating somewhat of an informal buffer. In early 2018, then-Interior Secretary Ryan Zinke halted a lease sale over cultural concerns after hundreds of people protested.

The battle over energy development around Chaco has been simmering for years. In 2015, government officials visited the region in hopes of brokering a way forward for the tribes and energy companies.

The Bureau of Land Management and the Bureau of Indian Affairs began working together on revamping the resource management plan for the San Juan Basin, which covers a larger portion of northwestern New Mexico and parts of southern Colorado.

The partnership was meant to ensure tribes would be consulted and that scientific and archaeological analysis would be done to guarantee cultural sensitivity.

Udall argued that the repeated pursuit of land near the park and the lack of a final management plan have resulted in “a scattershot, shoot-from-the-hip approach.” He called for the upcoming lease sale to be delayed.

Paul Reed with Archaeology Southwest said the informal buffer should be adopted as part of the management plan because scientists have barely scratched the surface when it comes to studying and understanding Chaco.

“Aside from the sites that everyone knows about in Chaco, there are a number of communities that exist within the 10-mile zone that we think need a greater level of protection,” he said.