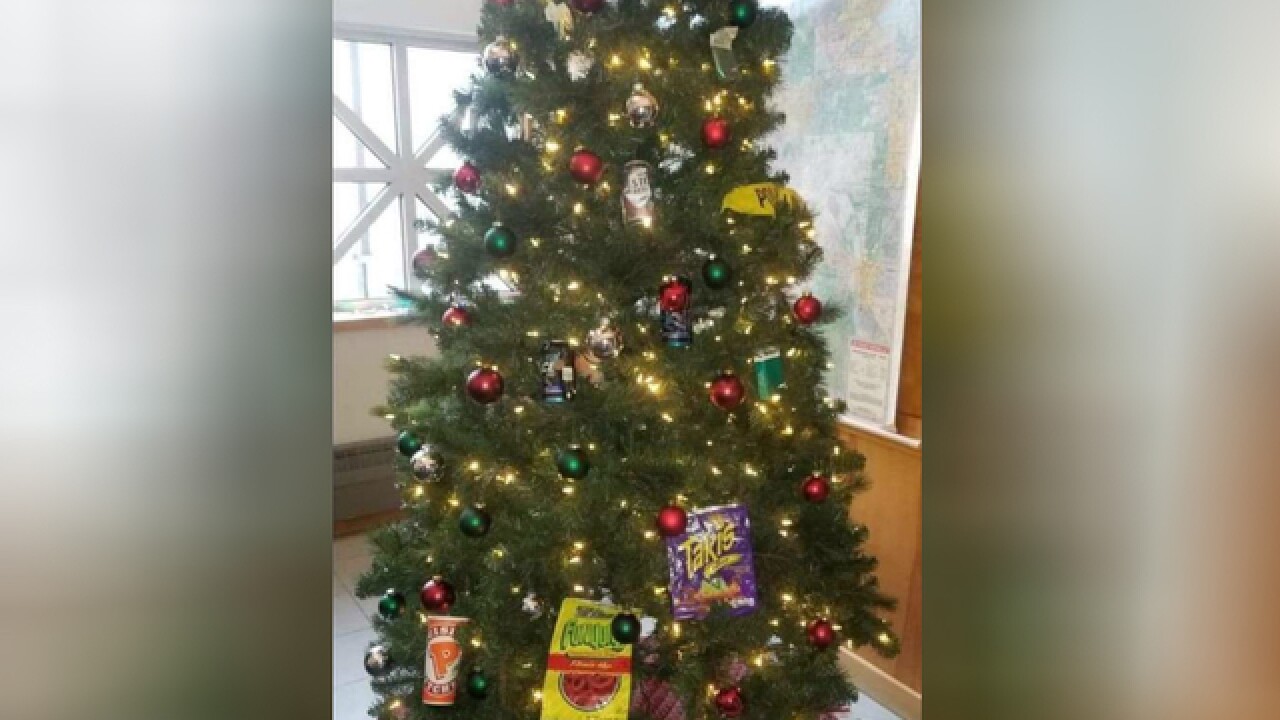 Copyright 2018 Scripps Media, Inc. All rights reserved. This material may not be published, broadcast, rewritten, or redistributed.
@northxnorthside/Twitter
<p>Along with the ornaments and strands of lights, two police officers in the 4th precinct of Minneapolis' Police Department added some unusual items to their lobby's Christmas tree: A collection of street trash, including packs of Newport cigarettes, a crumpled bag of Takis chips, a cup from a Popeyes fried chicken outlet, a can of Steel Reserve malt liquor and some yellow crime scene tape. Critics say the items chosen play on negative stereotypes about African-Americans.</p>

Along with the ornaments and strands of lights, two police officers in the 4th precinct of Minneapolis' Police Department added some unusual items to their lobby's Christmas tree: A collection of street trash, including packs of Newport cigarettes, a crumpled bag of Takis chips, a cup from a Popeyes fried chicken outlet, a can of Steel Reserve malt liquor and some yellow crime scene tape. Critics say the items chosen play on negative stereotypes about African-Americans.

"These pieces of trash were deliberately chosen to represent how certain officers feel about the community they serve: that Black people are a stereotype to be mocked and the lives of those they serve may as well be reduced to trash in the gutter," City Councilman Phillipe Cunningham said on Facebook.

The department has since placed the officers on leave and has launched an internal investigation amid an outcry that the decorations mocked the precinct's predominantly black neighborhoods. The precinct commander also was demoted, according to the Star-Tribune.

Minneapolis Mayor Jacob Frey called the tree "racist" and "despicable." On Friday, he vowed the officers responsible would be fired.

"Shifting the culture of the police department requires swift and decisive action," he said. "Termination is necessary -- both to discipline the officer and to send a clear message."

A spokesman from the mayor's office has since walked back parts of that statement, acknowledging that the fate of the officers responsible will take some time to determine.

"Every day I work to bridge the divide between the police department and the community, as do so many others in our department," said Minneapolis Police Chief Medaria Arradondo in a statement. "The culture of the Minneapolis Police Department has undergone positive change, however as this recent incident shows we still have much work ahead."

Three years ago, the department was heavily criticized for the fatal police shooting of Jamar Clark, a 24-year-old African-American, during a scuffle with white officers. An internal investigation concluded in 2016 that the officers involved did not violate any department policies, and they were not disciplined.

Cunningham, the city council member, said the conversation around the Christmas tree is about a lot more than the trash used to decorate it.

"It's about broken trust. The police break our trust when they do things that undermine the humanity of our community," he said.

"Reminders like this continue to infuriate me and so many in my community. They hurt EVERY gain made in improving community-police relations. On a personal level, despite being a (councilman), I am still a Black man myself and these outrageous reminders only further my own feeling generally unsafe around police officers."

Another city councilman, Jeremiah Ellison, said on Twitter that he's working to address the incident.

"It might seem small to some, but it simply is racist and offensive, and I'm sorry the community has to experience this from our precinct," he said.

"The yellow tape is so traumatic," she said. "It's just triggering to anybody who's experienced any kind of crime in the past year."

She said she felt the objects on the tree were "a representation of everything that's deadly in our community."

This is a photo of a racist and derogatory Christmas tree at the Minneapolis 4th precinct. @jeremiah4north @CunninghamMPLS @Jacob_Frey We must demand an apology and commitment to build better community relations. This is unacceptable. pic.twitter.com/xNq4CUZUu5

Mel Reeves, a Twin Cities human rights activist, said there's no trust to break because there was never trust between the police and the community in the first place.

"The police is supposed to serve and protect," he said. "If something happens over and over again, it just means it's something you're doing on purpose."

After the shooting of Clark, there are still wounds in the community that haven't healed, Reeves said.

"It just sends a message that they don't really have any respect for our community," he told CNN. "There's no trust. It's an uneasy tension between the community and the police."

"We're disgusted and we're outraged," said Reeves, who also appeared at a press conference Friday about the incident. "This is Christmas season. This is time for peace, goodwill towards other human beings. The message they send is they don't even like us, and that disdain doesn't take a holiday."