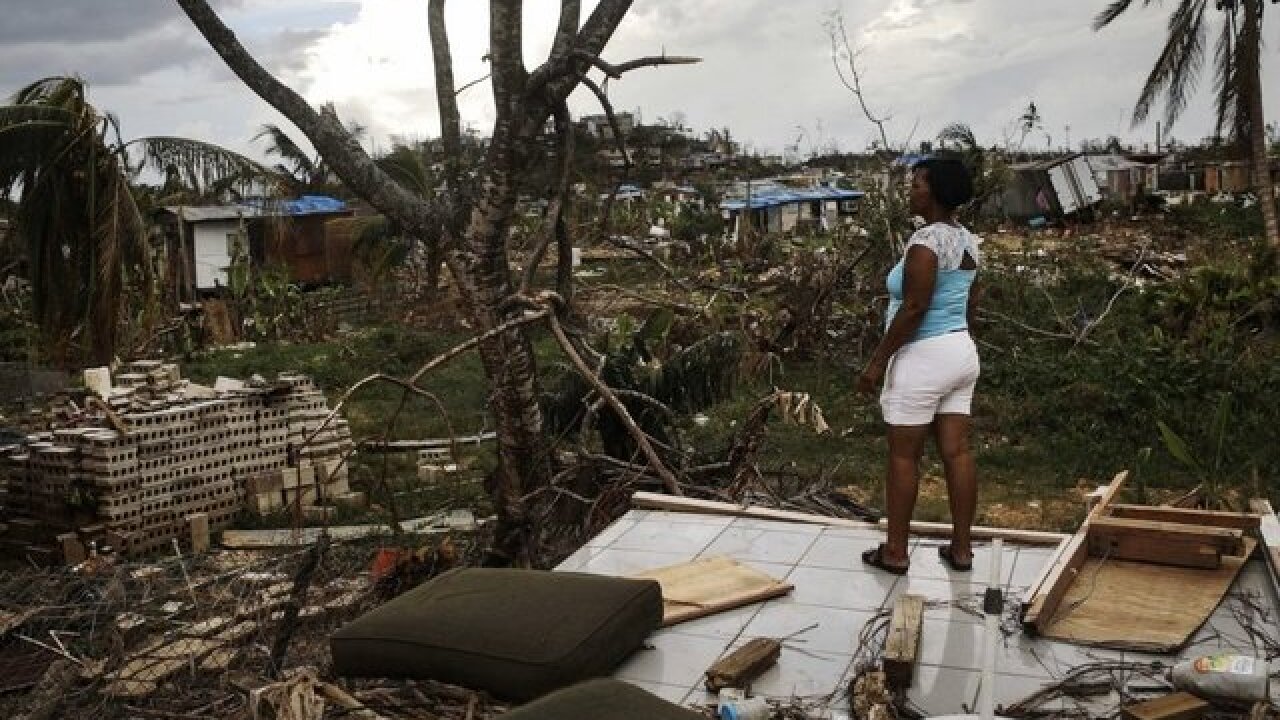 President Donald Trump, facing a drastically revised death toll in Puerto Rico a year after dual hurricanes devastated the island, offered a still-rosy outlook of his administration's handling of the disaster on Wednesday.

"I think we did a fantastic job in Puerto Rico," Trump told CNN's Jim Acosta during an exchange with reporters at the White House. "We're still helping Puerto Rico."

It was an optimistic accounting of his administration's handling of the natural disaster, which left much of the US territory without power for months and resulted in thousands of deaths.

The island's governor formally raised the death toll from 64 to 2,975 on Tuesday following a study conducted by researchers at George Washington University.

The study accounted for Puerto Ricans who succumbed to the stifling heat and other after-effects of the storm and were not previously counted in official figures.

Trump has trumpeted his handling of the storm's aftermath, including saying in the days afterward the storm had resulted in a relatively small number of deaths compared to a "real catastrophe like Katrina." Hurricane Katrina, which devastated parts of Louisiana in 2005, killed roughly 1,200.

He also awarded himself a "10 out of 10" on disaster recovery efforts during an Oval Office meeting last year with Puerto Rico's governor.

"Did we do a great job?" he asked his guest.

Through it all, Trump has maintained that Puerto Rico's languishing infrastructure and geography hampered efforts. He said on Wednesday an outdated electric grid and the territory's status as an island continued to the difficulty.

"Puerto Rico was actually more difficult because of the fact it was an island," he said. "It's much harder to get things on the island."

Trump has come under stiff criticism for his handling of the disaster, principally from Carmen Yulín Cruz, the mayor of Puerto Rico's capital city San Juan.

"The administration killed the Puerto Ricans with neglect. The Trump administration led us to believe they were helping when they weren't up to par, and they didn't allow other countries to help us," Yulín Cruz said on CNN Wednesday, later adding, "Shame on President Trump. Shame on President Trump for not even once, not even yesterday, just saying, 'Look, I grieve with the people of Puerto Rico.'"

Trump did not respond directly to his critics Wednesday, instead saying he hoped the island doesn't suffer a similar fate this year.

"I only hope they don't get hit again because they were hit by two in a row," Trump said.

"Brownie, you're doing a heck of a job," Bush said then.

Trump's comments on Wednesday were not the first time he has praised the federal response in Puerto Rico. And while the death toll was not known when he voiced some of his earlier praise, they did come as disaster relief experts and local officials sounded the alarm about the slow pace of the federal response.

"Every death is a horror -- but if you look at a real catastrophe, like Katrina, and you look at the tremendous hundreds and hundreds and hundreds of people that died, and you look at what happened here with, really, a storm that was just totally overpowering -- nobody has ever seen anything like this," Trump said in Puerto Rico less than two weeks after Maria struck. "Everybody around this table and everybody watching can really be very proud of what's taken place in Puerto Rico."

Trump not only repeatedly praised the federal response, but he also struck out at the news media and critics who highlighted the slow pace of some of the recovery efforts and the dire conditions that much of the island continued to face for weeks and months after the hurricane made landfall.

Ten days after the hurricane made landfall, Trump lambasted news reports about the troubled situation in Puerto Rico in a series of tweets.

"Despite the Fake News Media in conjunction with the Dems, an amazing job is being done in Puerto Rico," Trump tweeted. "The Fake News Networks are working overtime in Puerto Rico doing their best to take the spirit away from our soldiers and first R's. Shame!"

In another tweet, he lashed out at San Juan's mayor, who had taken to the airwaves to raise alarm about the slow pace of recovery efforts.

"Such poor leadership ability by the Mayor of San Juan, and others in Puerto Rico, who are not able to get their workers to help," he tweeted.