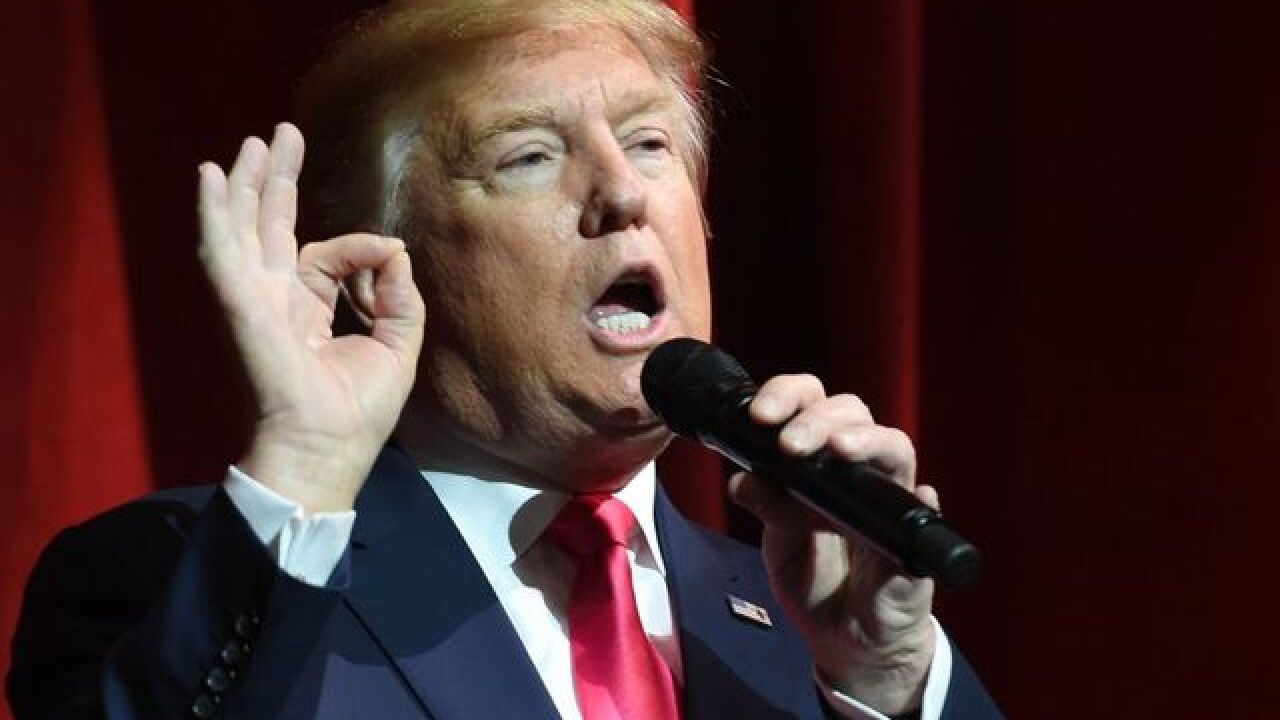 WASHINGTON (AP) — Donald Trump's most prominent supporters insisted Sunday that he's put the burden of "birtherism" behind him with his concession that President Barack Obama was born in the United States. But like their candidate, they tried to blame Hillary Clinton's campaign and rejected any notion that Trump's political identity is founded on five years of peddling the false rumor that Obama was born elsewhere.
"It's over," said Trump's running mate, Indiana Gov. Mike Pence.
But saying Trump's admission of the error was behind him — as two sitting governors and several other Trump supporters did across the Sunday talks shows— doesn't necessarily make it true. The issue is nearly certain to come up during Trump and Clinton's first debate, Sept. 26.
The episode reflects Trump's penchant for spreading unsubstantiated claims when he stands to gain from them and his refusal to apologize or take responsibility when he's been wrong. That operating style did not stop the billionaire developer from vanquishing 16 Republican challengers and capturing the GOP nomination. But in a one-on-one battle with Clinton, it can add up to a character questions with three debates and mere weeks to go before the Nov. 8 elections.
Recent polls suggest Trump may have benefited in recent weeks by his own newfound discipline and Clinton's missteps. She called half of Trump's supporters "deplorables" — then apologized for saying "half" — only to fall ill with pneumonia and wobble during an abrupt exit from this year's 9/11 memorial ceremony. For hours, Clinton's campaign obfuscated about what was wrong with her. It was the worst stretch of her campaign, and during it, a newly confident Trump for the first time in several weeks began to veer off his written remarks.
After scripted well wishes for her recovery, he returned to questioning her stamina as she prepared to resume campaigning last week. "You think Hillary would be able to stand up here for an hour and do this?" he asked at a rally. "I don't think so."
And on Friday, he made his usual sarcastic call for Hillary Clinton's Secret Service agents to be stripped of their firearms, then added an aside to his rally remarks: "Let's see what happens to her."
An uproar ensued over what Clinton supporters said was Trump's newest suggestion of violence against her. On Sunday, Pence called that interpretation "absolute nonsense," adding on ABC that Trump was only suggesting Clinton has been protected by gun-toting security guards for decades. Pence said Trump's point was that "she'd change her attitude about the right to keep and bear arms" if she didn't have a security detail. In fact, Clinton has not challenged the constitutional right to bear arms, despite calling for some stronger gun control measures.
Clinton's campaign on Sunday largely let Trump's stands-ins on TV splash around in the morass of "birtherism" while it grappled with her critical challenge: winning young voters who don't trust her and whose support has waned in recent weeks. Running mate Tim Kaine argued there are five "litmus test" issues that show the former secretary of state, not Trump, stands with millennials. The issues, he said, are climate science, women's health, LGBT equality, immigration and college affordability.
But Trump's high-profile supporters weren't focused on issues. One by one, they argued Trump didn't start the birther fable, that he's the victim of a biased media and that people don't care about the birther issue, anyway.
New Jersey Gov. Chris Christie, who's heading up Trump's transition team and has long said Obama was born in the U.S., insisted on CNN that "the birther issue is a done issue."
He blamed a Clinton aide for saying that Clinton herself pushed questions about Obama's birthplace during the 2008 Democratic presidential primary. But that aide, Clinton's 2008 campaign manager Patti Solis Doyle, told CNN that a volunteer county coordinator in Iowa forwarded an email that promoted the debunked theory. She said she apologized to Obama's campaign chief, made clear "this is not coming from us" and Clinton dismissed the coordinator when she learned about the matter.
Meantime there's plenty of evidence that Trump, beginning in 2011, became the chief promoter of "birtherism" as he considered running for president in 2012.
Christie asserted Trump had not pushed the issue: "It wasn't like he was talking about it on a regular basis."
But in August 2012, in just one example of Trump bringing the subject up, he tweeted: "An 'extremely credible source' has called my office and told me that @BarackObama's birth certificate is a fraud."
As recently as January, Trump sounded skeptical on whether he now believed the president was a natural-born citizen eligible under the Constitution to be president.
"Who knows? Who cares right now? We're talking about something else, OK?" Trump said in a CNN interview. "I mean, I have my own theory on Obama." On Friday, he finally acknowledged: "President Barack Obama was born in the United States, period."
Copyright 2016 The Associated Press. All rights reserved. This material may not be published, broadcast, rewritten or redistributed.