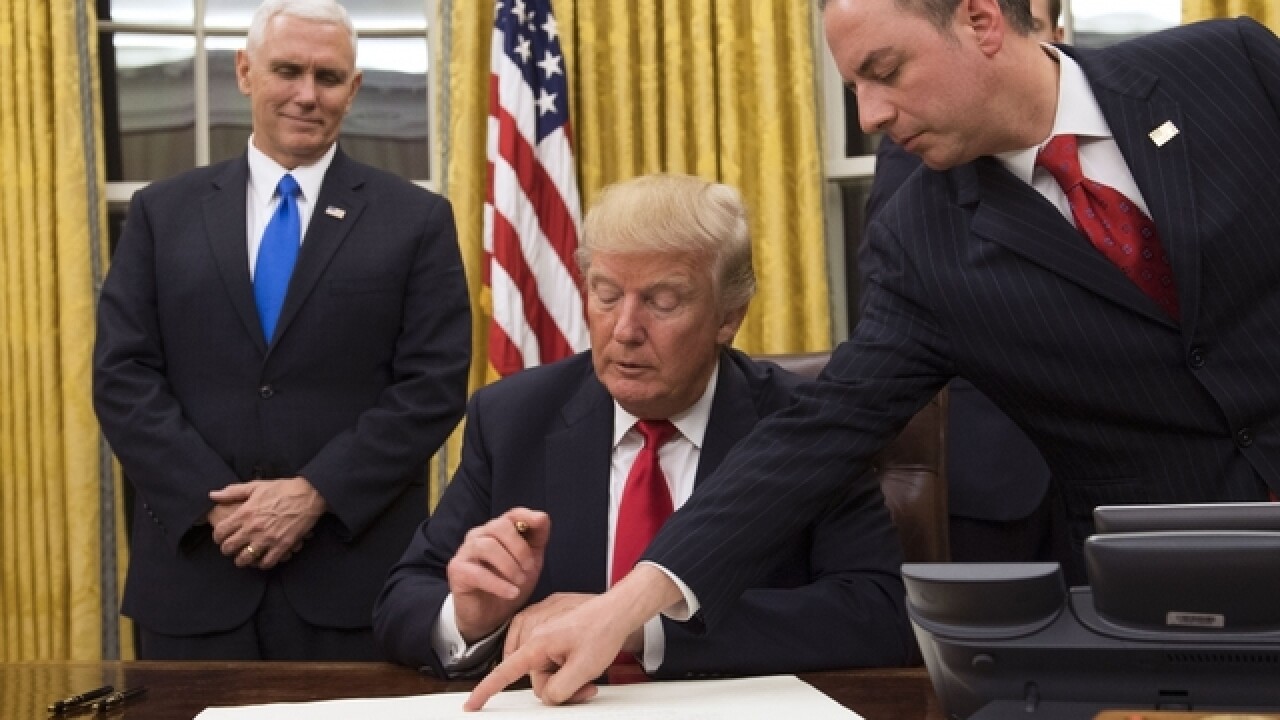 WASHINGTON (CNN) -- Within hours of taking the oath of office, President Donald Trump on Friday night signed an executive order aimed at trying to fulfill one of his most impassioned campaign promises: Rolling back Obamacare.

The multi-part executive order stated that the administration's official policy is "to seek the prompt repeal" of the Affordable Care Act -- but at the same time emphasized that it must continue to uphold the law.

With his signature, Trump sent a powerful signal on Day One of his presidency: His top priority in the Oval Office will be dismantling the health care law that covers some 20 million Americans.

The order does not change the law, but could have a significant impact nonetheless.

It directs the secretary of health and human services, as well as other agencies, to interpret regulations as loosely as allowed to minimize the financial burden on individuals, insurers, health care providers and others.

It stressed that agencies can "waive, defer, grant exemptions from or delay implementation of any provision or requirement" of Obamacare that imposes a burden "to the maximum extent permitted by law."

One possible example is the individual mandate, which requires most Americans to be insured or pay a penalty unless they can prove a financial hardship. The Trump administration could try to loosen the criteria for qualifying for a hardship exemption. That way, fewer people would have to pay the penalty, which would be in line with the executive order and the call to provide relief to Americans suffering from the Obamacare's high costs.

"This will set the gears of the bureaucracy moving in a very different direction," said Larry Levitt, senior vice president at the Kaiser Family Foundation. "Many of the changes envisioned in this order will take time to implement, but it signals a clear direction."

In keeping with longstanding Republican beliefs, the order also looks to give states more flexibility and control over their health care markets and to allow insurers to offer policies across state lines.

All of these actions will start to shift the nation's health care rules toward Republican ideas. And it will allow the Trump administration to chip away at the law going forward.

However, little can be done until a health secretary -- and other key HHS officials -- are in place to work on changing those guidance and regulations. Trump's choice to lead HHS, Tom Price, faces the Senate Finance Committee on Tuesday.

An HHS spokesman said the agency will not release a statement on Friday.

Much of Obamacare has already been set in regulation, which a president does not have the power to nullify and which can take months or even a year or two to change.

Also, Trump and other Republican leaders have repeatedly said they want a "smooth transition" to a GOP plan so that millions of Americans will not suddenly lose coverage.

"He has been told that he needs to comply with the law," said Timothy Jost, an emeritus professor at Washington and Lee University School of Law, "but is directing the agencies to begin taking steps towards reducing regulatory requirements and giving more discretion to the states. It's going to take time."

Meanwhile, congressional Republicans are working to actually repeal major sections of the law -- including the individual mandate, subsidies and penalties -- but they remain divided over when and how to replace Obamacare. Conscious that millions of Americans are worried about losing their coverage, lawmakers have repeatedly said that their plan will give people more access to more affordable plans.

Trump has also said he is nearly done working on a replacement proposal. Republican leaders in Congress, however, have said they have not been consulted.

White House Chief of Staff Reince Priebus also sent out a memo to all government agencies and departments calling for a regulatory freeze.

Signal on Day One

Republicans have been railing against the health care law for years, using "repeal and replace Obamacare" as a political rallying cry to gin up support within the GOP base. During the presidential campaign, Trump promised his supporters that as president, he would do away with the law and that his alternative would be "something terrific."

But Republican lawmakers are quickly learning how difficult it will be to overhaul the law.

Initially, GOP leaders signaled that they would move forward with a vote to repeal major portions of Obamacare but delay the repeal from going into effect for a few years to give the party time to craft a replacement plan.

But that "repeal and delay" strategy drew almost immediate pushback. Rank-and-file Republicans grew nervous that the uncertainty created by the lack of a replacement would spark chaos in the insurance market -- and leave the party holding the blame for millions of Americans who might confront either disrupted or halt in coverage.

Trump has been adamant that "repeal and replace" must happen more or less simultaneously -- a stance that GOP leaders on the Hill have since adopted.