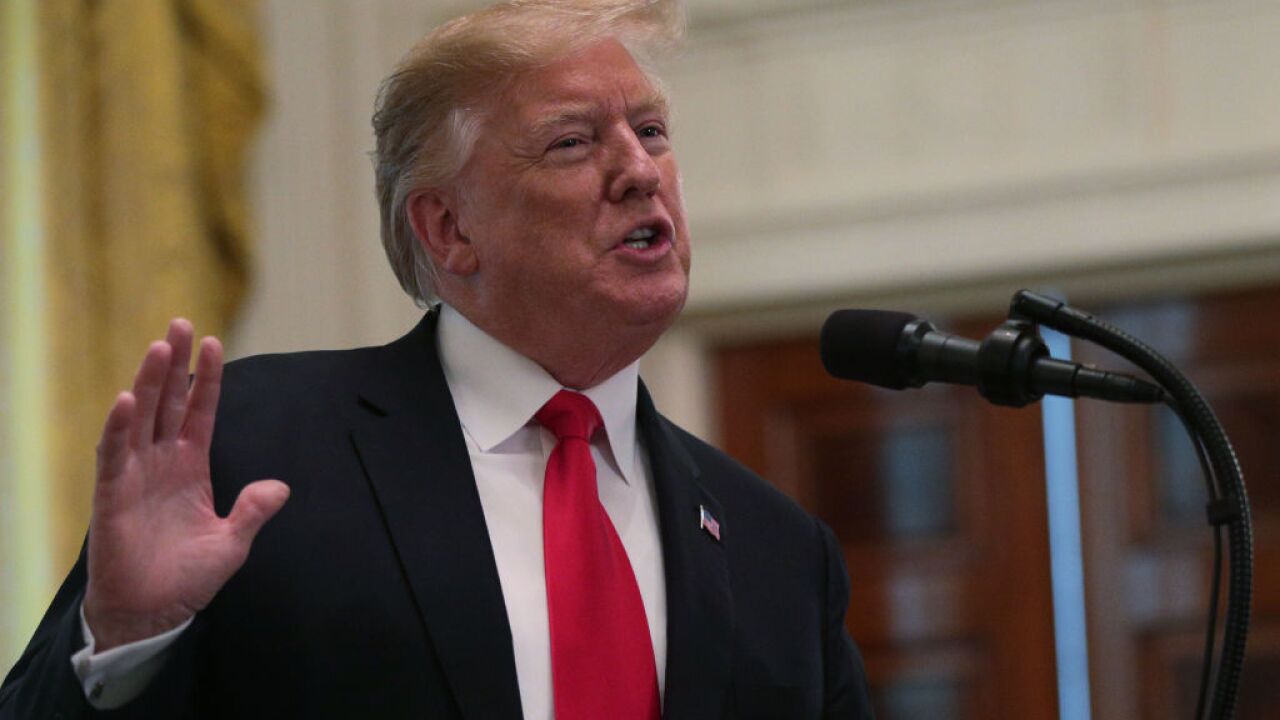 Donald Trump signed an executive order Thursday afternoon aimed at improving transparency and promoting free speech on college campuses, part of a largely symbolic gesture to the President's conservative base announced at a conference for conservative activists earlier this month.

"We're here to take historic action to defend American students and American values. They are under siege," Trump said during a signing event at the East Room of the White House.

"Every year the federal government provides educational institutions with more than $35 billion dollars in research funding, all of that money is now at stake. That's a lot of money. They're going to have to not like your views a lot, right?" Trump said. "If a college or university does not allow you to speak, we will not give them money."

The order, a senior administration official told reporters on a call previewing the signing, is part of the President's vision of "making higher education more transparent and holding institutions more accountable."

Education Secretary Betsy DeVos, who attended the signing, said the executive order "demonstrates this administration's commitment to supporting and empowering students with meaningful resources as they pursue their life-long learning journeys and future careers."

Earlier in his presidency, Trump called for bumping up further restrictions on the press by "opening up" libel laws. However, Trump's new executive order is happening against the backdrop of conservative voices highlighting instances of alleged violence directed toward student activists in viral videos on social media.

The official speaking to press on Thursday would not comment on recent incidents, saying only that Trump "is fully committed to free speech on college campuses."

Aside from certification, the official would not offer key details -- including how the order would be implemented or enforced, as well as how much grant money will be affected or what specific language higher education institutions are being told to agree to. It's largely unclear how the measure will affect college campuses in practice.

But the order also aims to provide transparency to students on the financial risk of attending specific colleges and universities, including adding program level earnings, debt and loan default and repayment rates to the federal College Scorecard started under the Obama administration.

The President first announced his intention to sign an executive order on the issue at the Conservative Political Action Conference earlier this month -- an annual gathering of conservative activists near Washington.

"Today, I am proud to announce that I will be very soon signing an executive order requiring colleges and universities to support free speech if they want federal research funds," Trump said then, adding that if schools do not comply, "it will be very costly."

Conservative activist and Turning Point USA founder Charlie Kirk told CNN he will be at the White House for the executive order signing.

Turning Point USA works to train conservative students to protest and organize more effectively with conferences across the country.

The President's son, Donald Trump Jr., who is close with Kirk, praised him in a Thursday morning tweet.

"Great work by @TPUSA and @charliekirk11 who have been pushing this since the first time I met him years ago," he wrote.

Sarah Ruger, the director of the toleration and free expression division of the Charles Koch Institute, a Libertarian-leaning policy group, said the group is "concerned that wrongly framing censorship as an ideological issue works against efforts to foster open intellectual environments on campus."

"For continued progress to be possible, we must have a vanguard to defend speech that's above partisanship," she said.

The Foundation for Individual Rights in Education (FIRE), a group focused on freedom of speech and religion in academia, said in a statement that the executive order "should be uncontroversial."

"FIRE will watch closely to see if today's action furthers the meaningful, lasting policy changes that FIRE has secured over two decades — or results in unintended consequences that threaten free expression and academic freedom," the statement said. "We note that the order does not specify how or by what standard federal agencies will ensure compliance, the order's most consequential component. FIRE has long opposed federal agency requirements that conflict with well-settled First Amendment jurisprudence. We will continue to do so."