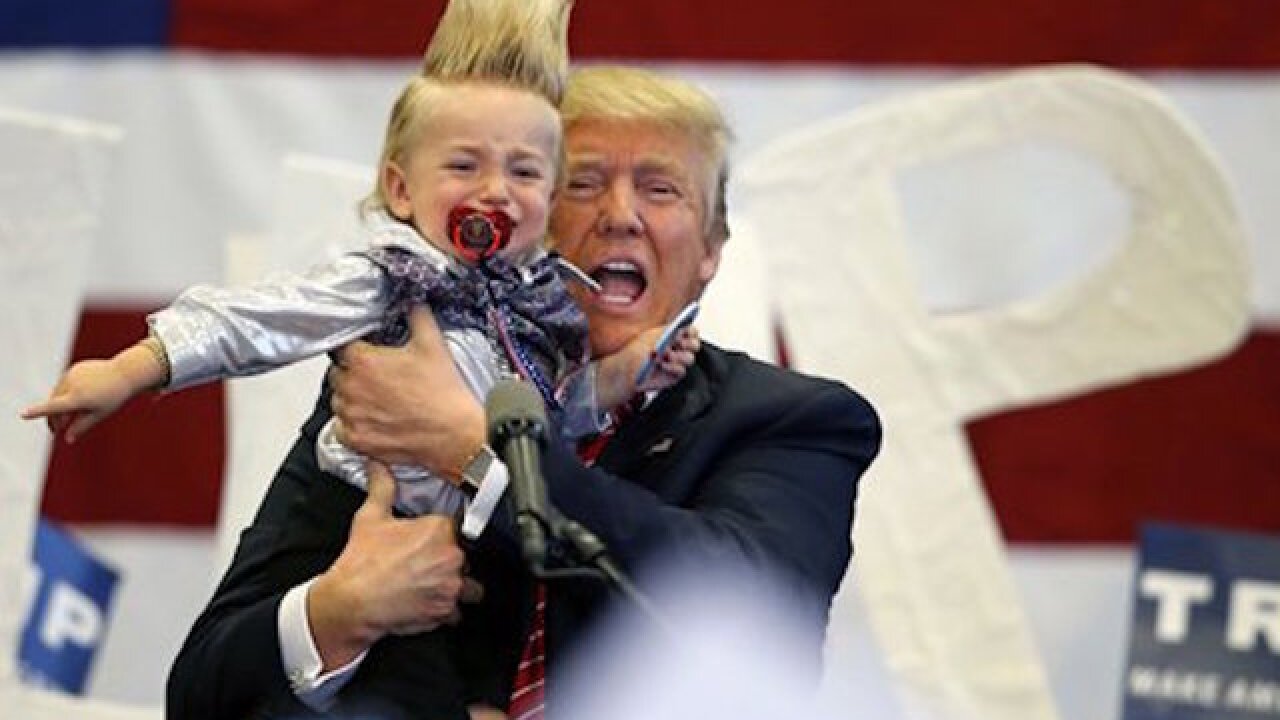 Copyright Associated Press
Gerald Herbert
<p>Republican presidential candidate Donald Trump holds up a child he pulled from the crowd as he arrives to speak at a campaign rally in New Orleans, Friday, March 4, 2016. (AP Photo/Gerald Herbert)</p>

VALDOSTA, Ga. (AP) — Among the many ways Donald Trump has redefined presidential politics, he stands alone for how he has used large, protest-ridden rallies, often bubbling with raw anger, to fuel his candidacy.

The Republican front-runner says the massive events are evidence of a "movement" of a "silent majority" frustrated by everything from the nation's uneven economy and immigration laws to a government run by "stupid people."

"And you know what?" he asked from the stage in Louisville, Kentucky, this week. "It's not about me. I'm a messenger. It's really about you. We're going to take our country back and make it great again."

While Trump generally exaggerates his crowd sizes, thousands routinely line up for hours to attend. There are almost always protests, and the response to them isn't always peaceful. Yet Trump supporters, some driving hours to see the former reality television star, appreciate the boisterous performance and see in it a strength they don't find in Washington leaders.

In Texas last week, Arlene Smart attended her fourth Trump rally. "It's just the feeling," said Smart, 58, who said she'd be traveling the country to his events if she didn't have a construction business to run. "There's pride in America. There's a reason to believe."

"It's a spectacle driven by pure hate," said Michael Marmol, a 20-year-old student who was ejected from the Radford event after he yelled at Trump over his plan to construct a wall on the Mexican border.

Indeed, crowds from Nevada to New Hampshire have devoured Trump's hour-long offerings of economic populism and unrepentant nationalism, all wrapped in promises to "win, win, win" and "make you so proud of this country again."

A natural showman, Trump peppers his speeches with humorous asides, imitation and dramatic acting. In Texas last week, he threw water across the stage and then tossed the bottle behind him to mock a rival's sweat. He frequently holds events in open airplane hangars, circling in his private jet with giant gold "T-R-U-M-P" letters as thousands hold cellphones up to capture its descent as soaring music from the movie "Air Force One" plays.

"We're going to build a wall. And who's going to pay for the wall?" Trump shouts.

"Who's going to pay for the wall?"

"MEXICO," they thunder back.

Police are investigating at least two alleged assaults against protesters at a recent Kentucky rally. One, captured on video, involves a young African-American woman who was repeatedly shoved and called "scum."

In recent weeks, one of Trump's biggest applause lines has been his vow to bring back waterboarding and other methods of torture. "We don't go far enough," he told a Las Vegas crowd before the Nevada caucuses, prompting thundering applause and chants of "USA! USA!"

Anti-Trump protesters have also becoming increasingly common as the election calendar has moved away from the more subdued early-voting states.

"Get 'em outta here, get 'em outta here," Trump often booms when he spots one. "Are you protesting, darling?" he asked a demonstrator at Radford. He mocked another: "He just got on television. He's happy." Sometimes, he suggests they're high on drugs.

Occasionally Trump complains police are being too gentle with protesters, bemoaning the "old days" when police didn't fear for their jobs when they roughed up citizens.

"You know what they used to do guys like that when they were in a place like this?" he asked in Las Vegas as a protester was removed. "They'd be carried out on a stretcher, folks." Amid cheers, he added, "I'd like to punch him in the face."

On Friday, Trump recalled an incident at a New Hampshire rally where a protester started "swinging and punching." Trump said some people in the audience "took him out."

"It was really amazing to watch," he told an audience in Warren, Michigan.

Later Friday in New Orleans, Trump's rally was interrupted by a near-constant stream of protesters, including many from the Black Lives Matter movement. At points, campaign manager Corey Lewandowski was spotted personally assisting police as they escorted protesters out of the building. Members of Trump's personal, private security detail were also on hand to assist.

Months ago, Trump's team began telling supporters they should not harm demonstrators. Instead, crowds are instructed before rallies to surround protesters with signs and chant "Trump! Trump! Trump!" until authorities arrive.

Some incidents have carried racial undertones. At Radford, Trump asked one protester, who appeared to be of Asian descent, "Are you from Mexico?"

While Trump often talks about how much he likes protesters — suggesting he'll hire some because they encourage television cameras to show his crowds — his aides have, at times, become aggressive about ejecting them.

On Monday, black Valdosta State University students were escorted out of a campus event in Georgia before it began. Ameer Junious, 19, said police directed him to the back of the arena — with no explanation given — before Trump arrived. Videos shot by Junious show a person who appeared to be police officer telling him, "They asked me to have y'all moved," adding, "I can't explain that, OK?"

In a statement, Trump campaign spokeswoman Hope Hicks said the campaign "had no knowledge of the incident."

Video of a fall rally in Birmingham, Alabama, captured Trump supporters physically assaulting Mercutio Southall Jr., an African-American activist Trump ordered removed — "Get him the hell out of here, will you, please?" — after Southall shouted "black lives matter!"

Trump later said on Fox News, "Maybe he should have been roughed up."

Yet as he continues his march toward the nomination, Trump reassures his backers they have the moral high ground. "I'm not an angry person," he said at Radford. "You're not angry people." Then, pointing at demonstrators, he said: "They're angry people."