Trump: I wanted month delay before travel ban, was told no 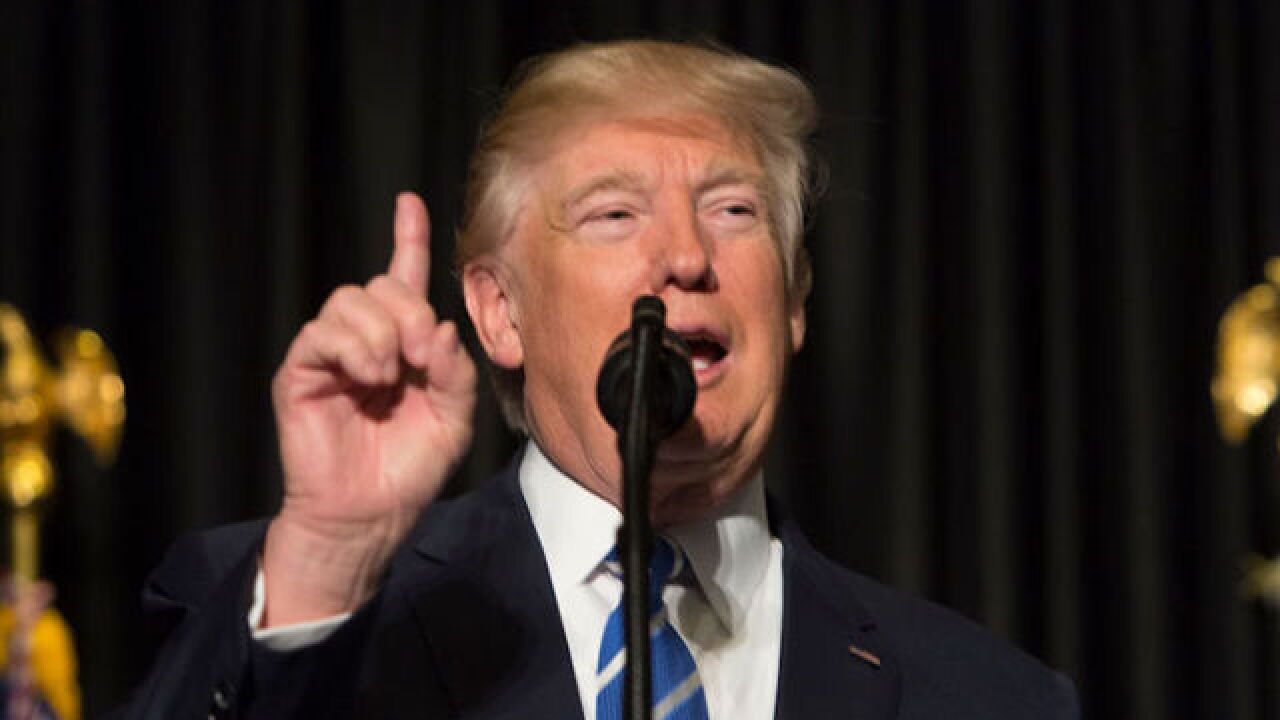 Copyright Getty Images
Pool
<p>WASHINGTON, D.C. - FEBRUARY 8: (AFP-OUT) U.S. President Donald Trump speaks to the Major Cities Chiefs Association (MCCA) Winter Meeting on February 8, 2017 in Washington, DC. During his speech, Trump said one of the main reasons he was elected was his stance on law and order. (Photo by Chris Kleponis-Pool/Getty Images)</p>

President Donald Trump -- even as he blasted lawyers contesting his immigration executive order -- detailed for the first time Wednesday his own hesitations about the controversial plan before it was signed.

Trump, speaking to law enforcement officials in Washington, said he argued before the order was finalized for giving travelers a month's notice before cutting off entry to the US.

But he said he was overruled by law enforcement officials, who he didn't name, alleging the delay could prompt a flood of dangerous terrorists into the country -- an explanation that failed to account for the lengthy process of obtaining a US visa or applying for refugee status.

"The law enforcement people said to me, 'Oh, you can't give a notice,' " Trump said at a conference for the Major Cities Chiefs Association. "I suggested a month. And I said, 'What about a week?' They said you can't do that because then people are gonna pour in before the toughness."

It was a surprising admission, given the President's full-throated defense of his travel ban. He even tweeted Sunday after a judge suspended its implementation: "Just cannot believe a judge would put our country in such peril. If something happens blame him and court system. People pouring in. Bad!"

Trump also insisted his administration properly went about enacting the order, which bars citizens of seven Muslim-majority countries from entering the US for 90 days, all refugees for 120 days and indefinitely halts refugees from Syria.

"We do things well. We did things right," Trump told the sheriffs. "It's as plain as you can have it."

In the week-and-a-half since Trump signed the contentious order, he's expressed no public reservations about its preparation or consequences, amid skepticism and protests. Even some of Trump's political allies bemoaned the rollout, which was drafted by a tight circle of Trump's aides with little input from lawmakers or the federal agencies who would ultimately be responsible for enforcing it.

In defending his administration, Trump tweeted last week that advance warning on who the order would ban could have led to a flood of migrants into the US.

"If the ban were announced with a one week notice, the 'bad' would rush into our country during that week. A lot of bad 'dudes' out there!" Trump tweeted on January 30, without noting he'd expressed his own thoughts on delaying the ban before the order was signed.

Their claim that such a move would encourage waves of immigration doesn't match the realities of obtaining a US visa, which can take months and wouldn't allow such a rush of migrants. Procedures already in place require the citizens of the seven countries on the administration's list to undergo background checks and intelligence reviews before obtaining permission to enter the US.

Refugees must also undergo lengthy vetting before being allowed to enter the US for resettlement.

But White House press secretary Sean Spicer said last week that delaying the order could place the country at risk.

Speaking before Congress Tuesday, Secretary of Homeland Security John Kelly suggested the rollout of the immigration restrictions could have been eased by greater transparency ahead of time.

"In retrospect, I should have -- and this is all on me, by the way -- I should have delayed it just a bit so I could talk to members of Congress," he told the House Homeland Security Committee. "The thinking was to get it out quick so that potentially people that might be coming here to harm us would not take advantage of some period of time they could jump on an airplane and get here."

In his speech on Wednesday, Trump didn't explain his reasoning in raising a month-long delay on the ban. The executive order, which he signed at the Pentagon on January 27, contends the restrictions on travel are necessary while US security agencies review vetting measures on travelers and enact more stringent requirements. The President didn't specify whether that review would also have been delayed.