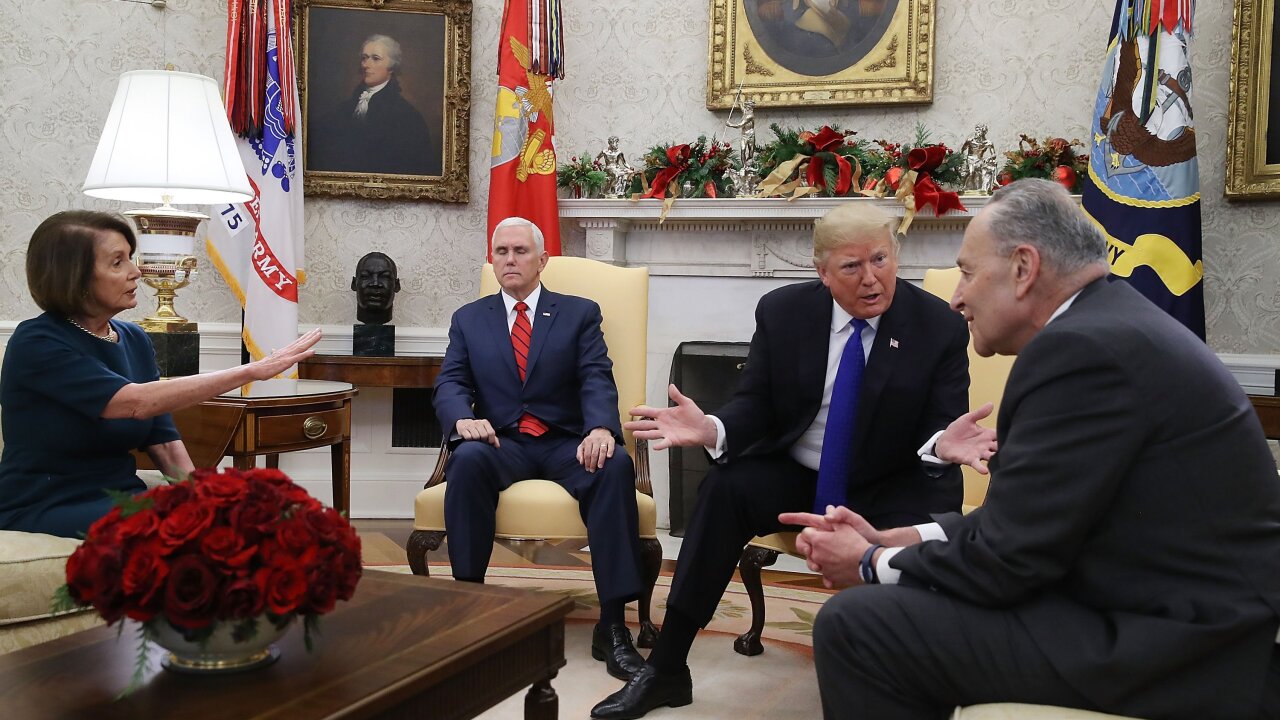 (CNN) -- President Donald Trump is expected to propose extending protections for Deferred Action for Childhood Arrivals recipients and individuals with Temporary Protected Status in exchange for border wall funding in his remarks Saturday afternoon, a senior administration official and a source familiar with the matter confirmed to CNN. The proposed deal, however, will likely be dead on arrival due to a lack of support from Democrats.

The President's latest offer, which he is set to deliver from the White House Saturday at 4 p.m. ET, will link his demand for $5.7 billion for a border wall to the BRIDGE Act, legislation that would extend protections for so-called "Dreamers," undocumented immigrants who arrived in the US as children and are covered by the DACA program.

The compromise proposal would also allow immigrants covered by Temporary Protected Status -- some of whose protections Trump has rescinded -- to remain in the country.

While early last year Democratic senators worked on a deal with Republicans which offered $25 billion in border funding in exchange for a permanent path to citizenship for some 1.8 million Dreamers (an offer rejected by the President), the new offer expected to be put on the table by Trump would only extend temporary status, not citizenship, to DACA and TPS recipients.

The lack of a path to citizenship is a nonstarter for Democrats.

House Speaker Nancy Pelosi said in a statement Saturday that initial reports of the proposed deal "make clear that his proposal is a compilation of several previously rejected initiatives, each of which is unacceptable and in total, do not represent a good faith effort to restore certainty to people's lives."

"It is unlikely that any one of these provisions alone would pass the House, and taken together, they are a non-starter. For one thing, this proposal does not include the permanent solution for the Dreamers and TPS recipients that our country needs and supports," Pelosi added.

And despite co-sponsoring the BRIDGE Act, Illinois Sen. Dick Durbin said in a statement Saturday that he would not support the upcoming proposal to reopen the government.

"First, President Trump and Senate Majority Leader McConnell must open the government today. Second, I cannot support the proposed offer as reported and do not believe it can pass the Senate. Third, I am ready to sit down at any time after the government is opened and work to resolve all outstanding issues," Durbin said.

A senior administration official told CNN that this proposal remains fluid and could change.

"Democrats were not consulted on this and have rejected similar overtures in the past. It's clearly a Republican-and-Republican negotiation," a Democratic congressional aide with direct knowledge of negotiations told CNN.

Axios was the first to report the proposal.

The makings of a proposal

A source familiar with the discussions said the President tasked his son-in-law and White House adviser Jared Kushner, acting chief of staff Mick Mulvaney and Vice President Mike Pence with working to craft a broader compromise proposal that they could present to Democrats.

The three men set out to put together a "fair and reasonable proposal," engaging with numerous members of Congress in recent weeks, the source said.

The aides then began discussing the proposal with Trump in recent days to get him on board.

As for the timing, the White House wants it to look like they had a valid reason for canceling House Speaker Nancy Pelosi's trip to Afghanistan, and feared that if there was no movement this weekend -- no meetings, no negotiations or no speeches -- they would look bad, two people familiar with the schedule told CNN.

Trump's latest proposal to Congress came together over the last week, with White House officials working into Friday night to hammer out the details and how Trump would lay it out in his Saturday afternoon address.

Republican Sen. Lindsey Graham of South Carolina had floated such a compromise to the President as early as late December.

Another source told CNN the plan is modeled after proposals Democrats have supported and voted for in the past in an added effort to pressure them back to the negotiating table.

The White House, though, hasn't gotten assurances that Democrats will be open to this. But rather, the proposal is based on conversations with Republicans and a belief that moderate rank-and-file Democrats are more willing to compromise than their party's leadership.

Democrats have so far refused to provide any funding for the border wall and have insisted that Trump reopen the government before a broader immigration or border security deal can be hashed out.

Kushner and Pence had also presented the concept to Senate Majority Leader Mitch McConnell on Thursday night, according to multiple Republican congressional aides.

Though he didn't come up with or help craft the proposal, McConnell offered suggestions over the last two days as to how to move the plan forward, a source familiar told CNN. House Republican leaders are also supportive of the move and will hold a call with their conference members Saturday afternoon to walk through the details.

The BRIDGE Act -- proposed by Graham and Durbin -- would provide temporary protected status and work authorization for three years to eligible Dreamers.

While Democrats supported the original BRIDGE Act, they have largely moved away from it as a solution as DACA has moved into the domain of the courts. The legislation doesn't provide a pathway to citizenship and is only a temporary solution. When asked about the BRIDGE Act as a possible way out of the shutdown last week, Durbin made clear to reporters the government needs to be re-opened before discussions about it could become real.

The President's willingness to address DACA in a possible border wall deal is a reversal from his position that the courts should sort it out first.

In 2017, Trump's administration announced plans to phase out the DACA program and Trump has previously said he would wait to address protections for its recipients after a Supreme Court ruling on the matter.

House Democrats to move on spending bills without wall money

Trump's proposal comes as House Democrats are pushing forward with legislation to beef up security at the borders -- without funding for the wall -- a move bound to intensify the standoff over a partial government shutdown heading into its fifth week.

As part of a package of six spending bills, House Democrats next week will vote on $1 billion for additional border security measures, according to a Democratic source.

The $1 billion would not include money for the border wall, as Democrats are trying to make the case there are other border security measures that are more effective.

The money includes port security measures as well funding for immigration judges who could help with cases of migrants crossing the US-Mexico border seeking asylum, the source told CNN.

The money is roughly split between port security and funding for additional judges.

The proposal is highly unlikely to break the impasse between Democrats and the White House to reopen the government, which is now in its 29th day. Even though the House will vote next week, Senate Majority Leader Mitch McConnell has said he won't hold a vote on a bill that lacks Trump's support.

The spending package that the Democrats intend to vote on next week will be the six agreements the House and Senate came to in conference.

This package including the $1 billion will be the 10th measure House Democrats vote on in an effort to reopen the government since the new session of Congress began. So far, the House has approved seven of those bills, with a re-vote scheduled for the eighth bill on Tuesday that is expected to pass.