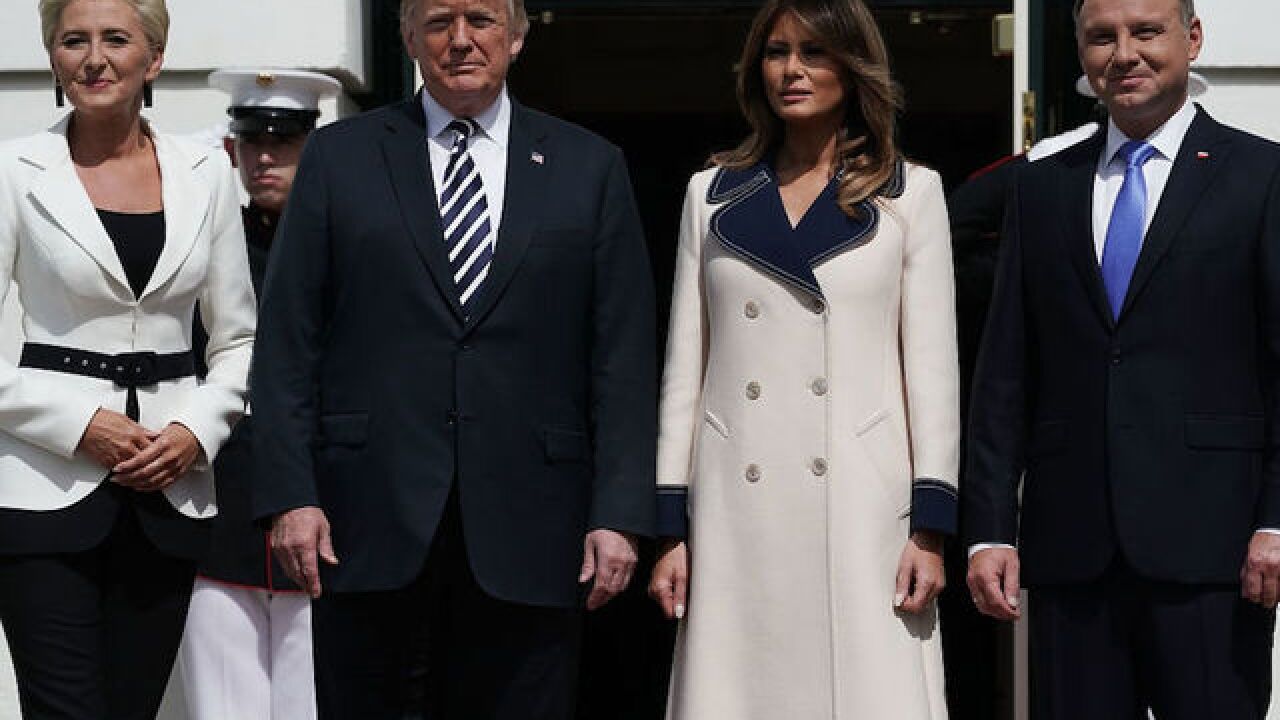 Image copyright 2018 Getty Images. All rights reserved. This material may not be published, broadcast, rewritten, or redistributed.
Alex Wong
<p> U.S. President Donald Trump (2nd L) and first lady Melania Trump (3rd L) welcome President Andrzej Sebastian Duda (R) of Poland and his wife Agata Kornhauser-Duda (L) during their arrival at the South Portico of the White House September 18, 2018 in Washington, DC. While Trump made Poland the first stop on his European tour last year, Duda is on his first trip to the White House. </p>

"It wouldn't bother me" if the FBI reopened a background investigation on Kavanaugh, he said, but "the FBI...they really don't do that.

"I feel so badly for him that he's going through this," Trump said. "This is not a man that deserves this."

In talking about the nation's relationship with Poland, Trump said the two countries "are deeply committed to energy diversity all across Europe."

"No nation should be dependent upon a single foreign supplier of energy," he said.

The President also discussed ISIS, saying there has been "tremendous progress with respect to defeat" of the terror organization.

Also during the news conference, Trump said, “Both Poland and the United States understand that strong nations must have very strong borders.”

In other Trump news, the President plans to visit hurricane-stricken North Carolina on Wednesday. The death toll in Hurricane Florence is 33.

EARLIER STORY:
President Donald Trump said Tuesday he does not believe the FBI should delve any further into the decades-old sexual assault allegation leveled against Supreme Court nominee Brett Kavanaugh, claiming the FBI does not want to be involved.

"I don't think the FBI really should be involved because they don't want to be involved," Trump said, though he then held open the possibility of the FBI involving itself in the matter. "If they wanted to be, I would certainly do that. But as you know, they say this is not really their thing."

Trump's comments came as Senate Democrats ramped up calls for the White House to direct the FBI to reopen Kavanaugh's background investigation before any hearings on the allegation of sexual assault leveled over the weekend against the Supreme Court nominated judge can proceed.

The Senate Judiciary Committee has invited both Kavanaugh and Christine Blasey Ford, his accuser, to testify before the committee on Monday.

Democrats on the committee, in a letter to White House counsel Don McGahn and FBI Director Chris Wray, stressed the need for the FBI "to perform its due diligence" and reopen its background investigation into Kavanaugh before any hearings take place.

"The Committee should have the completed report before any hearing occurs and we ask that you take immediate steps to make sure that we have the FBI's report before we proceed. Please notify us as soon as possible whether this can be completed in time," Senate Democrats wrote in the letter.

A Justice Department spokesperson said in a statement on Monday that the FBI forwarded the letter it received last week from Sen. Dianne Feinstein, the top Democrat on the Judiciary Committee, which described the initially confidential allegation of sexual assault against Kavanaugh, to the White House Counsel's Office.

"The FBI does not make any judgment about the credibility or significance of any allegation," the spokesperson said, pointing to a 2010 memorandum of understanding between then-Attorney General Eric Holder and White House Counsel Bob Bauer. "Consistent with the memorandum of understanding, the FBI forwarded this letter to the White House Counsel's Office. The allegation does not involve any potential federal crime. The FBI's role in such matters is to provide information for the use of the decision makers."

Trump said Kavanaugh "is anxious" to testify and cast doubt on Ford's willingness to testify.

"This should have been done a long time ago and when Sen. Feinstein had Judge Kavanaugh in her office for a long time, she never even mentioned this," Trump said.