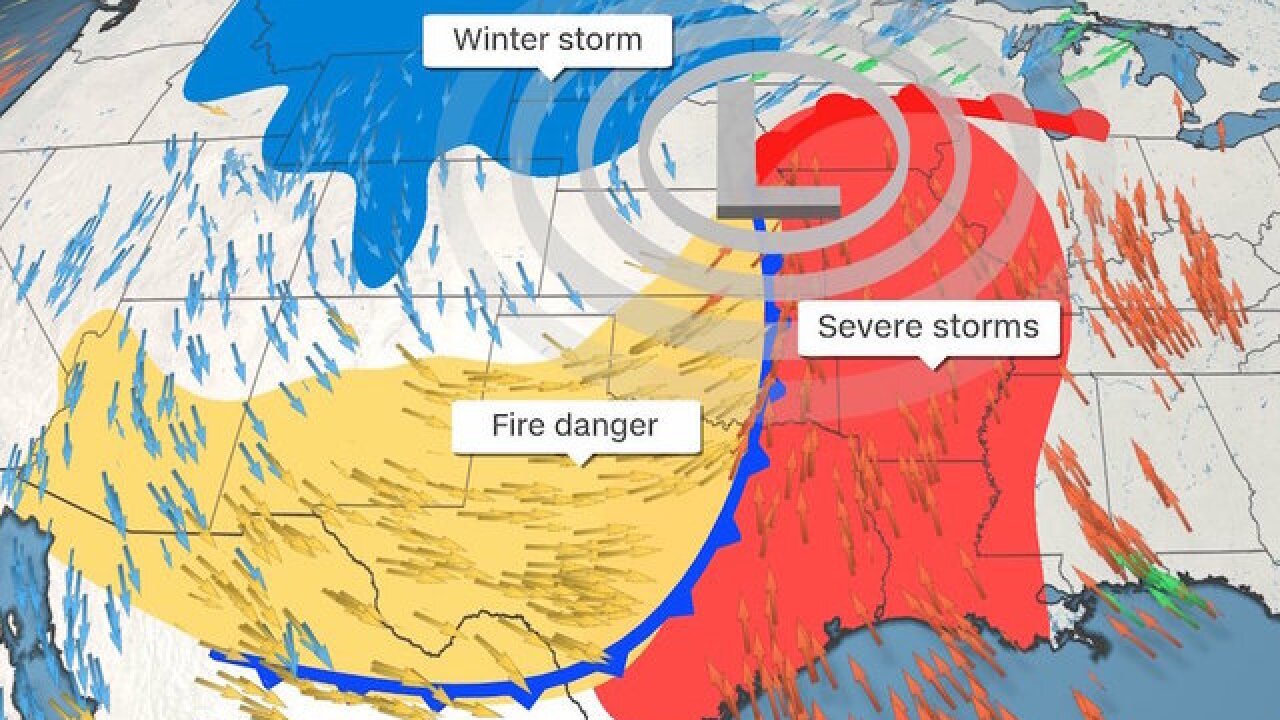 © 2018 Cable News Network, Inc.
CNN
<p>This year, spring hasn't seen much of a show. A good portion of the eastern and central US had a cool March, and April has begun similarly. Rather than the bout after bout of severe storms that we frequently see during the transition of seasons, March and April have had wild weather in the form of snow and record low temperatures.</p>

Spring is a season of change and typically brings some of the wildest weather across the United States. This weather is spawned from a clash of air masses, as warm and humid air begins to creep north from the Gulf of Mexico while bitter shots of cold air continue to drop in from Canada.

This year, spring hasn't seen much of a show. A good portion of the eastern and central US had a cool March, and April has begun similarly. Rather than the bout after bout of severe storms that we frequently see during the transition of seasons, March and April have had wild weather in the form of snow and record low temperatures.

Ask any baseball fan across the Midwest and Northeast. Numerous early-season games have been canceled or postponed due to the snow and cold. Even the Chicago Cubs' home opener on Monday -- the last in the league -- was moved to Tuesday thanks to a couple of inches of snow.

All of that is beginning to change as warmer air builds over the central US and a vigorous system takes shape and moves east out of the Rockies on Thursday night. This system will form a cocktail of extreme weather, with critical fire danger in the Southern Plains, severe storms in the Mississippi River Valley and heavy snow for the Northern Plains and Upper Midwest.

As an extensive storm system develops over the Intermountain West and pushes east, a significant multiday fire threat is in place from the Southwest into the central and southern High Plains. Thursday marks the second day of the danger and comes with "extremely critical" fire conditions -- the highest threat level -- lasting into Saturday.

The National Weather Service in Norman, Oklahoma, went as far as to say that "historic" fire conditions are expected Friday.

As the system moves out of the Rockies, it will bring very warm and dry conditions with strong gusty winds -- all the conditions necessary for extremely critical fire danger.

Warnings for the high danger, known as red flag warnings, are posted for portions of eight states stretching from California to Kansas and cover more than 25 million people.

Temperatures across the region will soar into the 80s and 90s, winds will be sustained at 30 to 40 miles per hour with gusts well over 50, and relative humidity values will drop below 10%. To make matters worse, much of the area is under severe to exceptional drought thanks to persistent dry conditions. This will provide ample dry fuel and allow extreme rates of growth for any fire that starts.

An outbreak of severe storms likely

Slightly farther east, the warming conditions will be accompanied by moisture from the Gulf of Mexico.

As the cold front pushes east Friday, thunderstorm development is expected from eastern Kansas south into east Texas. This storm system will pack quite a punch, as there is a lot of energy in the middle and upper levels of the atmosphere.

According to NOAA's Storm Prediction Center, there is an enhanced risk (level 3 out of 5) from eastern Texas and Louisiana north into southwest Missouri. Strong winds, large hail and tornadoes are possible from Friday afternoon through the overnight hours.

On Saturday, the risk of severe storms moves into the Deep South, stretching from eastern Louisiana to the Florida Panhandle and north to Nashville.

Yes, this weekend marks the middle of April. And yes, heavy snow is still in the forecast for the Northern Plains and Upper Midwest.

On the northern side of the storm, frigid air will filter south from Canada. Where the air meets moisture, we will see yet another blast of April snow.

The same strong winds that threaten to turn brush fires into raging infernos on the southwestern side of this storm system will cause blowing snow and whiteout conditions on the northern side.

Blizzard warnings are posted for portions of South Dakota that will see a foot or more of snow and winds of 40 to 50 mph on Friday.

But the spring snow will not be limited to the Dakotas. Six to 12 inches will fall in Nebraska through the Upper Midwest.

Snow will move out of the northern Rockies and into the Dakotas and Nebraska on Friday. Friday night and Saturday, it will spread into Minnesota, Wisconsin and northern Michigan.

In addition to the snowfall, there will be freezing rain and ice across a broad stretch of the Great Lakes this weekend, adding to treacherous travel conditions that will be widespread across the northern tier.

This April weather is likely to have many in the north begging to skip spring and head straight into summer!